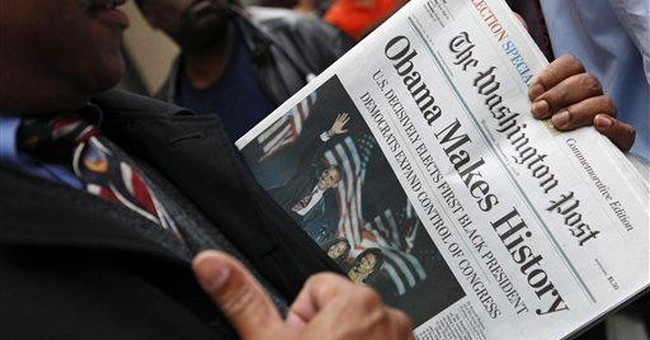 Once newspapers were the answer to the riddle: “What is black and white and read all over?” They’re no longer just black and white, but they are red all over. Red ink spills off nearly every page onto balance sheets across America.

The newspaper business is bleeding to death. Hidden amidst the other obits at the back of the Metro section should be “R.I.P. American Newspapers b. 1690 d. Soon – from self-inflicted wounds.” On Feb. 15, the Baltimore Examiner becomes the latest sad casualty of an industry racing headlong to its death.

It is not something to celebrate. For all of its many faults, the news industry is essential to our democracy and newspapers have been the best and most comprehensive examples of journalism for 300 years. But it is a death brought on by hubris and incompetence on the part of too many in the news media – from top to bottom. Now the rest of us might end up paying for it.

Rather than learn from bad business decisions, journalists want Wall Street style rescues. Both the Philadelphia Inquirer and Daily News were working with Pa. Gov. Rendell to get the two largest state employee pension funds to help bail out the papers. Lawmakers in Connecticut recently tried to save The Bristol Press and The Herald.

Back in September, the industry magazine Editor & Publisher argued against a newspaper bailout idea that was scarily gaining credibility with the press. “[T]hose talking up a government bailout also include such respected newspaper veterans as Seattle Times Publisher Frank A. Blethen and editor-turned-academic Geneva Overholser,” wrote the magazine.

But government support of media, while anti-democratic, isn’t unusual. Look at the hundreds of millions of dollars we throw at PBS or NPR each year. In return, we get taxpayer-funded, left-wing propaganda. Many in the media see that as the Promised Land.

That’s not the only option. The New York Times recently published an opinion piece by two financial analysts arguing that wealthy individuals need to turn news into nonprofits because “we are dangerously close to having a government without newspapers.”

Based on history, it’s highly unlikely newspapers will be savvy enough to save themselves. When the Internet gained popularity, news outlets were slow to cooperate and even slower to make money. Job ads moved online to places like Monster because new Web sites could react faster and better than stodgy news outlets. Classified pages were unable to compete against Craigslist, which does their job for free.

Instead of trying to revolutionize the news business, owners milked their cash cows until the cows died. Instead of embracing new tech, unions battled changing job rules and entrepreneurs launched competitors instead of dealing with such bureaucracy. That was poison in a good economy. With a major downturn, it is likely fatal.

Sure there will continue to be well run local print news outlets. But they are few. Even the Examiner’s scrappy local content wasn’t enough to buck the tide of an advertising slowdown and the loss of 43,000 industry jobs in the last two years.

It’s not just the Internet that’s taking a toll, either. Newspapers have been shedding circulation for years, but no number of fancy charts and color photos has addressed the core problem for the news media – a loss in credibility.

The media’s Obama obsession in the last election reminded Americans that too many in news can’t be trusted. The Pew Research Center for the People and the Press released a 2008 study that declared: “virtually every news organization or program has seen its credibility marks decline.” Just 25 percent of The Wall Street Journal readers said they “believe all or most of what the organization says.” The New York Times, Associated Press and USA Today all rated even lower.

The industry solution? Several executives have banded together to start a Web site – www.newspaperproject.org – promoting the industry and combating “negative, gloom-and-doom stories about newspapers.” The site attempts to whistle past the graveyard for an industry trying desperately to pay its bills. Strong readership numbers online are not turning into enough dollars to run things the old way. And even the old way didn’t always work.

The industry’s death throes are also a reminder that sometimes life imitates art imitating life. In 1952, Humphrey Bogart played a crusty newspaperman trying to save a dying paper in the movie classic “Deadline U.S.A.” It was patterned after a real life newspaper closing where Bogart’s paper, The Day, fights one last crusade against corruption before it too passes away.

Bogart’s character issued warnings that resonate even today – that “a free press, sir, is like a free life, it’s always in danger.” Thankfully, Bogey knew that danger could come not just from closing down, but from a government handout. Today’s journalists need to do a good Bogart impression.