Welcome to Stocks In The News, where the headline meets the trendline.

Agilent Technologies Inc., (SYMBOL: A) and the headline says:

“Agilent Technologies Inc., with a valuation cheaper than 96 percent of peers, would enrich shareholders by breaking up and focusing on its faster-growing biological- and chemical-testing businesses,” reports Bloomberg.  Agilent’s electronics-testing unit has seen no sales growth in the past decade.  A break-up of the company could unlock shareholder value by allowing the life sciences stock to rise independently of the electronic measurement stock.

Earnings and revenue have been rising nicely for a few years, but earnings per share are expected to fall 7% this year, with a 2% revenue increase.  Earnings are projected to resume growth in 2014 & 2015.  The PE is 15, and typically ranges between 8 and 26.

The stock has been trading between $31-$52 for a few years, currently on an uptrend. 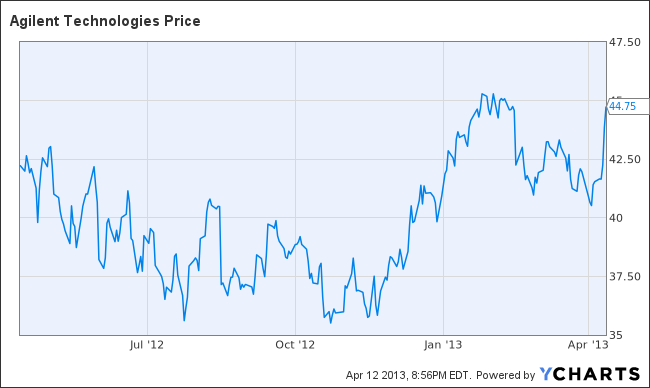 A data by YCharts

“Wells Fargo & Co., the largest U.S. home lender, said lower expenses helped the company post a record profit in the first quarter even as revenue dropped and lending margins narrowed,” reports Bloomberg. First quarter earnings per share came in at 92 cents, ahead of the consensus estimate of 88 cents.

Earnings per share have grown steadily since 2008, and are expected to grow 6-8% per year for the next three years.  Earnings are hampered by the low-interest rate environment, and helped by prospects for loan growth, and lower credit losses.  The dividend yield is 2.72%, and the PE is 10.1.  Wells Fargo’s long-term PE range is typically between 8 and 16.

The stock has been trading mostly between $23-$36 for the last ten years.  It appears ready to immediately break out on the upside. From a chartist’s point of view, the stock looks ideal. 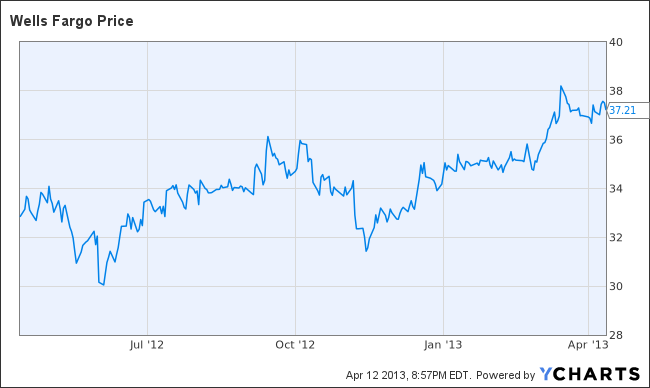 Macy’s claim of unfair competition against J.C. Penney Co. has been dismissed in the New York State Supreme Court.  Macy’s alleged that J.C. Penney sold Martha Stewart products in violation of an exclusive deal between Macy’s and Martha Stewart.  A breach of contract claim against Martha Stewart Living has yet to be ruled upon.

Macy’s remains a very attractive growth stock, with earnings per share expected to grow 12-14% per year for the next three years.  The PE is 11.5, and the dividend yield is 1.79%.  Macy's is expected to buyback up to 7-8% of outstanding shares per year.  Citi Research says, "Macy's is our favorite department store stock for 2013."

Macy’s stock reached a high of $46.65 before the 2008 Financial Meltdown, plummeted to single-digits, and is just now reaching its former high.  The stock broke past resistance at $42 in March, and continues to climb.  On Feb. 26, we told you to accumulate Macy’s shares. 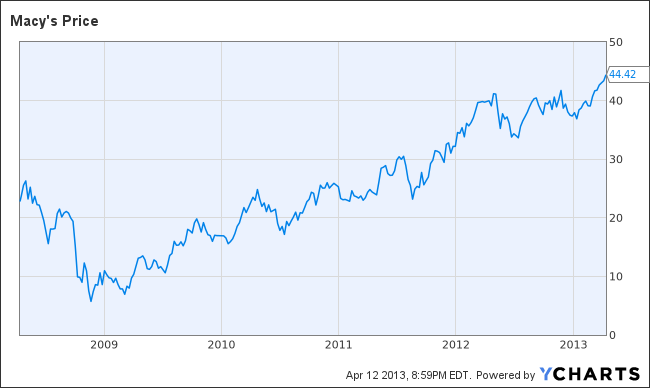