Connor Martin
|
Posted: Oct 24, 2020 12:01 AM
Share   Tweet
The opinions expressed by columnists are their own and do not necessarily represent the views of Townhall.com. 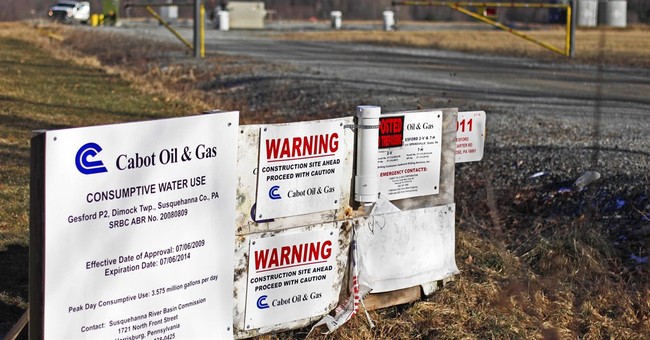 The second and final debate between President Donald Trump and former Vice President Joe Biden on Thursday, October 22 covered several concerns of interest to the American public. One of the most important issues discussed was the issue of “fracking,” which is colloquial shorthand for hydraulic fracturing – a method of extracting petroleum resources deep-seated in geological formations via high-pressure liquid blasting.

The topic was part of a larger discussion about “climate change,” energy policy and where the two candidates stand in terms of vision and approach.  When the subject of fracking came up, the former vice president seemed caught in past conflicting statements – an opening which President Trump seized, and where a number of commentators and analysts have suggested Biden fumbled.  As Biden attempted to clarify shifting positions on the future of fracking, the president went on to name several states where fracking – and the fossil fuel energy business writ large – constitutes a significant portion of the economy.  At least one of these states – Pennsylvania – has emerged as perhaps the most pivotal state this election cycle.

Targeted messaging in energy states is critical politically, particularly when a candidate has not been clear on their position and how their approach would impact real people.

But it’s not just fracking.

The purposeful dismantling of one particular industry – or, in more palatable but deceptive parlance, “transitioning” – would result in wide-arcing circles of economic erosion.  What about the truckers, and railroads who transport the oil from the fields to the refineries? Or the mechanics and machinists who service the oil-fields – or the H.R. and placement companies who help find good people to work good jobs?  Or the geologists who identify and sample new fields?  How about the miners, processers and transporters of silica sand – which is used as a medium in the hydraulic fracturing process – along the Mississippi River?  What about the manufacturers of specialized equipment and tools – who form a part of the economy that we’re trying desperately to rebuild – and their role in the energy business?  The list of affected businesses and people goes on and on.

In fact, when you start to look at how important American energy independence is – and the contribution of fracking to that independence – one quickly realizes how dependent the rest of the economy is, across all 50 states, on this entire industry. One need look no further than the global economic slowdown and its impact on an energy state like North Dakota to see what a purposeful dismantling of the energy business across the country would look like.

In any modern dynamic free market economy, one particular industry or business does not exist in a vacuum. They are interdependent, where the exchange of goods and services is both competitive and complimentary, and where other companies develop and expand to support one another and meet demand.  Out of this, communities grow, roots are cemented, and livelihoods flourish. Reversing that course through the systematic elimination of a core industry – such as fossil fuel extraction – can be devastating.

And let’s be honest – “transitions” are never as easy as they’re made out to be.  Fanciful are the notions that when a core industry is eliminated, everyone previously employed will immediately find a job, or that ancillary businesses can simply be re-directed to other markets in a short amount of time.  Some trades might be able to shift to new ground – but only if that alternative prospect already exists and is looking to hire – and not everyone laid off will find a new gig.  Even if a business transition took six months – a relatively short time – for a person out of work, that’s six months of bills, anguish, and pressure.  The natural competition of business in America is tough enough – why should politicians make things more difficult by instituting policies that target parts of the economy – often arbitrarily – for “transition?”

And this is where the rubber of Washington DC policy meets the real road in America: What sounds great on paper in a government or campaign office on Pennsylvania Avenue doesn’t always play out in Pennsylvania the State.  And it doesn’t play out in other states that weave together America’s energy sector – California, Alaska, New Mexico, Louisiana, Wyoming, Montana, and the Dakotas, or Mississippi, Indiana, Wisconsin, and Minnesota – or Texas, Oklahoma and Ohio as the President suggested in the debate.

The oil and gas business has always been an extraordinarily complex, lifeblood industry that has made fortunes, built nations, driven prosperity, and determined the course of wars.  For anyone who has read “The Prize”, Daniel Yergin’s monumental and outstanding Pulitzer Prize winning history of the oil industry, these facts should not be foreign.  And so, when politicians suggest or hint they are open to eliminating or reducing American industries through government policy, don’t forget that with those purposeful changes come innumerable consequences for a multitude of Americans.

We all need to remember that it’s not just fracking.

Connor Martin is a US Marine veteran and policy analyst in Washington, D.C.

Share this on Facebook
Tweet
'Wrong Track:' Who's Up for Some More Brutal Polling for Biden and the Democrats?
Guy Benson
Good Morning, Joe Biden, The Nation Thinks You're an Incompetent President
Matt Vespa
Retired Federal Agent Who Survived Cartel Attack Wants to Become Texas' Next Land Commissioner
Julio Rosas
Schlichter: A 'Minor Incursion' in Ukraine