Cliff May
|
Posted: Nov 16, 2016 10:28 AM
Share   Tweet
The opinions expressed by columnists are their own and do not necessarily represent the views of Townhall.com. 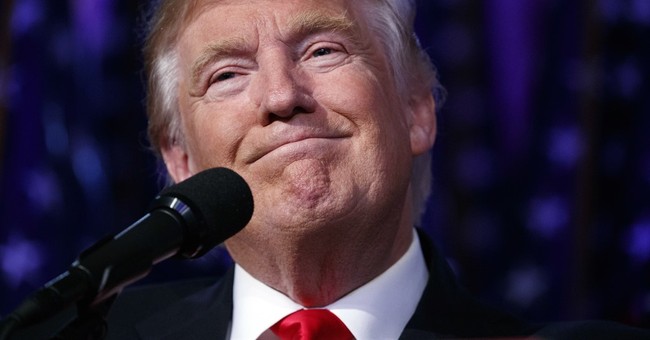 First and foremost: Nothing is more pivotal to democratic governance then holding free and fair elections that lead to a peaceful transference of power. Over the past week, Donald Trump, Hillary Clinton and Barack Obama all demonstrated that they get that. This is an achievement that should not be taken for granted — an achievement that remains out of reach in too many of the world’s nations.

Sadly, thousands of Americans are too ignorant to comprehend that. They have been not just protesting — that’s fine, that’s their right — but attacking Trump supporters, burning American flags and vandalizing property. Not without justification do Trump voters see this as confirmation that they made the right choice.

The majority of those voters live in “flyover country,” the vast American heartland between the Acela Corridor and the Left Coast. Most pollsters and journalists, ostensible pulse-takers of the nation, had not a clue as to what they were thinking.

So it has to be counted as astonishing that a septuagenarian real estate tycoon and reality TV star managed to intuit that a critical mass of hard-working, hard-living, salt-of-the-earth Americans was deeply frustrated with the political elites who have long ignored their interests, disdained their values and enforced the soft fascism of political correctness, blithely unconcerned that the foundations upon which they had built their lives were sinking.

What’s more, Middle America refused to be instructed by those who think of themselves as their betters, e.g., the liberal media, partisan comedians and Hollywood. Instead, they turned a tide that had seemed inexorable.

Having never held public office and lacking deep experience in Washington’s byzantine ways, the new president will need the best guidance he can get. Last week, he named Vice President-elect Mike Pence as transition chairman. A former House member and Indiana governor, Mr. Pence both knows his way around Spin City and empathizes with the forgotten men and women beyond the Beltway.

The same can be said of Sen. Jeff Sessions of Alabama, another prominent member of the transition team. Then there’s former Speaker Newt Gingrich who generates more ideas before lunch than most politicians do in a year. Kellyanne Conway, the first woman ever to successfully manage a presidential campaign (if she were a Democrat, the media would be making a much bigger deal about that) is as smart and tough as they come. Reince Priebus is a solid choice for chief of staff.

Mr. Trump will need good relations with Congress, whose status as a co-equal branch of government should be re-established after years of degradation. He is fortunate to have Paul Ryan, a singularly creative legislative problem-solver, as House speaker and Mitch McConnell, a sober and seasoned parliamentary strategist, as Senate majority leader.

Mr. Trump’s supporters on the far right disagree. They want him to keep the old hands at arm’s-length. Over the weekend, radio talk show host Mark Levin tweeted, “TRUMP MUST NOT BE INFLUENCED BY MCCONNELL.”

Mr. Levin is a stalwart constitutionalist. He, of all people, should understand that were it not for Mr. McConnell — labeled by the mainstream media as an “obstructionist” for preventing President Obama from giving Antonin Scalia’s chair to a liberal justice — the dream of a Supreme Court committed to the Framers’ vision would now be as dead as disco.

Saving the Supreme Court is a priority that Mr. Trump can accomplish quickly. Other items on his to-do list will take longer. Among them: tax (and IRS) reform, plus deregulation to encourage investment, job creation and economic growth, fixing the health care mess, securing America’s borders, rebuilding the military and negotiating better trade agreements without succumbing to protectionism.

Those enemies will not sit idly by while the new administration “nation-builds” at home. The rulers of Iran, China, North Korea and, yes, Russia, will devise ways to test the new president, to find out if he’s made of metal or mush. Planning for such contingencies should start ASAP.

That the nuclear deal with Iran is a disaster, providing both billions of dollars and legitimacy to the world’s leading sponsor of terrorism, goes without saying — or rather has been said by Mr. Trump. He’ll need to convey to the ruling ayatollahs that, with him in the White House, they will have a choice: make serious compromises or face serious consequences.

What Mr. Obama never understood is that Iran is the Shia edge of the jihadi sword. On the other edge, of course, are the Sunni jihadis, the Islamic State, to be sure, but also al Qaeda (reports of its death were greatly exaggerated) and dozens of less well-known groups. It’s imperative to finally, belatedly, forge a coherent strategy for the long war against jihadi totalitarianism in all its manifestations.

When considering who would be best equipped to take on these tough missions, the Donald was not the first name that popped into many minds. But I, for one, think that he’s made a convincing case that, at this stage in his life, his goal is to do some good — to end America’s decline, or as he more positively puts it, to “make America great again.”

That will require enormous and, let’s be honest, unprecedented discipline on his part. It will require that he and his deputies not try to do everything; that they instead provide incentives so that Americans can use their talents, energy and work ethic to make this country secure, prosperous and free. That is how democratic societies succeed. By now we should have learned: There is no other way.