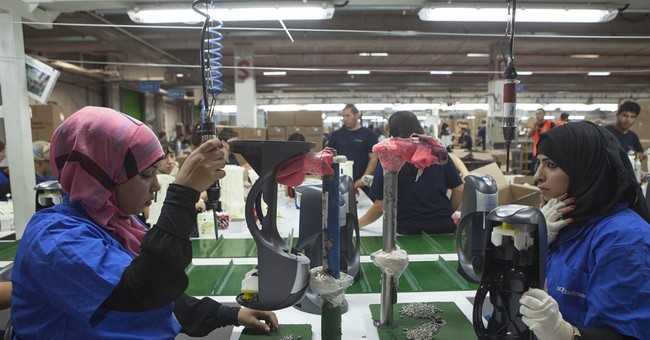 A few years ago, Daniel Birnbaum, an Israeli businessman, had an odd idea: “I decided I wanted to employ Palestinians.”

So he took over a factory on the West Bank -- where unemployment runs about 30% -- and he hired more than 500 Palestinians. He also hired 350 Israeli Arabs and 300 Israeli Jews. He paid them all “Israeli wages” which are four times higher than the West Bank average. But because Palestinians are not Israeli citizens and therefore don’t qualify for Israeli health care, he purchased private insurance for them, as well as for their dependents, knowing full well that “each employee supports about ten family members.”

You may have heard of Mr. Birnbaum’s company: SodaStream manufactures contraptions that let you turn tap water into sparkling water. He’d be eager to tell you – as he told me over dinner in Tel Aviv, a flourishing city that boasts ethnic and religious diversity unimaginable in other Middle Eastern lands -- why home-made seltzer is cheaper and healthier than sodas sweetened with lots of sugar or sugar substitutes, and why not buying soda in bottles and cans has important environmental benefits.

The point is he’s producing a good product and providing good jobs for Palestinians and demonstrating that it’s not impossible for Israelis and Arabs, Muslims and Jews, to work together, respect each other and sometimes even learn to like one another. Could it get any better than that? Yes: He recruited Scarlett Johansson to do his commercials.

What happened next: SodaStream attracted the attention of a campaign that calls itself BDS which stands for boycott, divest and sanction – economic punishments it wants to inflict on Israel and Israel alone, no other country, not even those that sponsor terrorism, not even those that commit the most egregious human rights violations and certainly not those that occupy disputed territories not claimed by Palestinians.

“They accused us of stealing land, ‘profiting from the occupation’ and taking advantage of our employees,” Mr. Birnbaum said. “Suddenly, I’m a walking war criminal!”

Oxfam, an organization whose ostensible mission is to fight poverty, helps fund BDS. As it happens, Ms. Johansson was Oxfam’s global ambassador. “They threatened to dump her if she continued to be SodaStream’s spokeswoman,” Mr. Birnbaum recalls.

Ms. Johansson told Oxfam to pound dirt. As for Mr. Birnbaum, “I wrote to the president of Oxfam and I said before you call for my people to lose their jobs, why don’t you come down here and look in their eyes?” Oxfam’s president did not reply.

SodaStream continued to grow. A new and more modern factory was needed. But “building in the West Bank would have been an act of insanity,” Mr. Birnbaum says, not because of the “constant nuisance” of BDS but because of the politics: Neither the Palestinian Authority (to which he offered to pay taxes) nor the Israeli government (whose ostensible policy is to support economic development in the West Bank) was supportive. So this year he opened a new plant in Israel proper, near Beersheba in the Negev Desert.

He did his best to retain his Palestinian workers but that hasn’t been easy: For some it was too tough a commute (even though he provided buses); others couldn’t obtain the permits necessary to work in Israel.

The new factory does, however, employ 300 Bedouins (once the great nomadic people of the Middle East), many of whom have never before had regular jobs with regular paychecks. Guess what: BDS continues to attack SodaStream, now claiming “we’re stealing Bedouin land and water.”

In fact, Sheikh Talal El-Garnawi, mayor of the Bedouin city of Rahat, was instrumental in convincing Mr. Birnbaum to build the new plant nearby and has since called SodaStream “a symbol of hope and cooperation.” He added: “There is no dispute, and there has never been a dispute, regarding the land on which the factory was built or regarding water or any other resources in the region.”

The most significant impact of BDS on SodaStream has been in Sweden. In response to pressure from retailers lobbied by BDS advocates, SodaStream agreed to stop shipping their machines from the West Bank factory. The Swedes have been pleased to receive products instead from a factory in China – a decidedly un-free country that “disappears” Tibetans who protest the Chinese annexation of their homeland. That has meant 150 fewer jobs for Palestinians with, again, each one responsible for an average of ten dependents.

Perhaps the Swedes, along with other “progressive” Europeans and Americans, think Palestinians are better off as wards of the “donor community.” Perhaps they think another round or two of “peace-processing” will prompt good foreign investors (as opposed to Israeli investors) to head for the West Bank checkbooks in hand. Or perhaps they think that if the Israelis bug out of the West Bank the result will not be – as it was in Gaza – the seizure of power by Hamas which builds factories that make missiles rather than kitchen appliances.

Meanwhile, not far to the north, the jihadis of the Islamic State, al Qaeda affiliates and Hezbollah are watching. What sort of employment do you think they might have in mind for jobless, impoverished and desperate Palestinians?

By contrast, Mr. Birnbaum has literally been bringing the peoples of the Holy Land together, providing opportunities to earn decent livings making products consumers want and will pay for.

Those who oppose that, those who are trying to stop him and prevent others from following his example – with BDS advocates leading the pack – call themselves pro-Palestinian. Their claim is, when you think about it, nothing short of ludicrous.