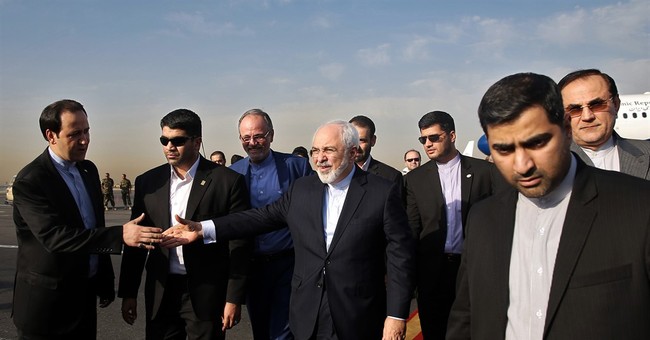 In other words, this agreement – formally known as the Joint Comprehensive Plan of Action (JPOA) – will both empower and enrich a regime that calls America its enemy, a regime responsible for more than 1,000 American military deaths since 9/11/01 (and hundreds more before that), a regime that proclaims “Death to America!” as its enduring and irrevocable mission.

President Obama seeks to accommodate and appease Iran’s rulers. He argues that the only alternative is conflict, and that this agreement will bring peace for our time. It would be an exaggeration to say that such policies always lead to major wars and holocausts. But can you tell me when such policies have led to good outcomes?

This, too, merits concern: Mr. Obama has chosen to conclude this agreement through a process that can, at best, be called post-democratic. As scholar Walter Russell Mead put it, a nuclear arms deal with the Islamic Republic of Iran “really ought to have been framed as a treaty.”

Treaties, however, require the support of two-thirds of the Senate, a higher bar than Mr. Obama was willing to attempt to clear. Alternatively, Mr. Obama could have framed the deal as a “binding executive agreement” and asked for supporting legislation to be passed by a simple majority of both houses of Congress.

Instead, President Obama decided to frame the deal as a “non-binding executive agreement.” As Professor Mead added: “There is precious little doubt that the Founders would have considered this a threat to the system of checks and balances they wrote into the Constitution.”

What I figured Mr. Obama would do next: submit the agreement to the UN Security Council which would adopt it and make it “binding” upon all UN members – including the U.S.

You may recall that Iranian Foreign Minister Javad Zarif was adamant on this point. Responding to the March letter from 47 Republican senators warning that the agreement could be abrogated once President Obama leaves office, he said: "I wish to enlighten the authors that if the next administration revokes any agreement with the stroke of a pen, as they boast, it will have simply committed a blatant violation of international law." A few days later, he told an audience in New York that following conclusion of an agreement “we will have a resolution in the Security Council ... which will be mandatory for all member states.”

In the end, the Obama administration came up with a clever workaround. On Monday, the UN Security Council endorsed a resolution that “calls upon all member states” to refrain from “actions that undermine implementation of commitments under the JCPOA” and, in effect, “urges” the U.S. to carry out the commitments included in the agreement – not least the lifting of sanctions. But, as John Bellinger, a former State Department and National Security Council legal advisor to President George W. Bush has pointed out, the resolution doesn’t actually require such actions “as a matter of international law.”

So if Congress disapproves this deal and refrains from lifting sanctions, the U.S. will not be an outlaw nation as Mr. Zarif claimed. But the U.S. will be “violating the spirit” of the UN resolution and contravening the non-binding political commitment made in the JCPOA. Indeed, Secretary of State John Kerry has warned that should Congress vote to disapprove the deal, the U.S. would be “in noncompliance with this agreement and contrary to all of the other countries in the world.”

A strong argument also will be made that maintaining American sanctions while those imposed by Europe through the UN are being lifted (within six months or so) would be a futile gesture.

I would make this counterargument: If members of Congress see this agreement as ill-advised and dangerous, they have a responsibility – to their constituents and to history -- to tell the truth. Those who endorse this deal will own it – and will share responsibility for what it brings.

What’s more, it would be a grave mistake to set the precedent that the UN Security Council – including such permanent members as Russia and China and such non-permanent members as Venezuela and Chad -- constitute a global government with the power to make significant decisions for the American people while the elected representatives of the American people are marginalized. If that isn’t technically a surrender of American sovereignty, it certainly opens that door – and, I’m afraid, removes the remaining hinges.

As Professor Mead put it, the president “is really requiring Congress to accept a permanent and significant diminution in its power for the sake of an Iran deal that few members view with enthusiasm. The precedent he is setting changes the Constitution, essentially abrogating the treaty power of Congress any time a President can get a Security Council resolution to incorporate the terms of an executive agreement.”

There is an alternative: No fewer than 200 treaties have been returned from the legislative to the executive branch with instructions to re-negotiate -- to amend and improve. Surely, that’s what should happen to this deal -- a deal that now runs a substantial risk of helping Iran become a nuclear-armed and terrorist-sponsoring hegemon, a threat to its neighbors, the United States and the world.