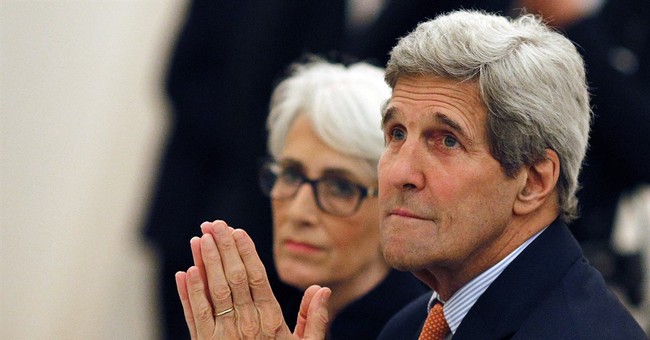 Imagine if, on September 12, 2001, I had written a column predicting that within less than 15 years, the president of the United States would be offering the world’s leading sponsor of terrorism a path to nuclear weapons and tens of billions of dollars. You’d have thought me a lunatic. But that’s what President Obama means to do.

What’s gumming up the works? Every time Secretary of State John Kerry thinks he has found a creative way to cave in to some Iranian demand, the Supreme Leader, Ali Khamenei, comes up with a new “red line.”

Just to be clear: There can be no doubt that the Islamic Republic of Iran is the world’s leading sponsor of terrorism. No less an authority than the U.S. government has affirmed that many times over. Hundreds, perhaps thousands, of Americans have been killed and maimed by Iranian-backed militias and proxies in Lebanon, Iraq, Afghanistan – although a plan to blow up a posh restaurant in Georgetown did go astray.

The founding principle of Iran’s 1979 Islamic Revolution was “Death to America!” Even as Iranians negotiators have smiled across the table at their American counterparts, that chant has been repeated -- not least by Ayatollah Khamenei himself.

All this and more is elided by those determined to believe that, with the signing of an agreement, Iran will become what President Obama has called a “successful regional power.” And why anyone would think that description implies something beneficial for America and America’s allies is a mystery.

When the current round of negotiations began, the goal was to persuade Iran’s rulers to dismantle a nuclear weapons program they claimed they didn’t have, didn’t need and didn’t want. Little by little, Iran’s skilled negotiators turned the talks upside down: The agreement currently under discussion would legitimize their nuclear weapons program – without their even having to acknowledge its existence.

Meanwhile, Iran’s development of Intercontinental Ballistic Missiles -- a program whose only purpose is to provide a means to deliver thermonuclear warheads to targets overseas -- will continue unimpeded. Early on, Iranian envoys told American negotiators that their ICBMs were not negotiable. In this and many other instances, the American negotiators acquiesced.

Why is President Obama so willing – if not eager -- to embrace diplomatic defeat? He may sincerely believe that Iran’s rulers will, over the years ahead, prioritize improving the lives of average Iranians over building a vast new empire – something akin to a caliphate. But no evidence supports that belief. No historical experience suggests that a regime that has survived for over three decades thanks to its ruthlessness and brutality is likely to undergo such a transformation within that time frame.

What can be done? To start, members of Congress who comprehend what’s happening need to go on record registering their disapproval of President Obama’s very bad deal. They should do what they can to resist the lifting of sanctions. This will not be easy for Democrats: The White House -- and various groups on the far left -- will exert intense political pressure on them. They would be well-advised to cast their gaze on the future: Congressmen have legacies, too.

Second, each and every presidential candidate – Hillary Clinton emphatically included -- should affirm that, during the first year of the next administration, Iran’s rulers will be required to verifiably demonstrate that they have halted their nuclear weapons programs. The next president must have reason to be confident that there are no undeclared nuclear weapons sites or activities.

If that doesn’t happen, if the Iranians cheat or if international inspectors are not getting the access they require, the new administration, unlike the current administration, must not look the other way or act as Iran’s lawyers. Instead, steps must be taken to re-impose crippling sanctions, prevent nuclear restrictions from sunsetting as this deal contemplates, and put other options back on the table – in a manner that Iran’s rulers will regard as credible.

Saying this sooner rather than later is vital: It can act as a disincentive to European and American businessmen who may otherwise be inclined to rush to Iran and plunk down big investments, after which they will become the regime’s de facto lobbyists

President Obama is keenly interested in his place in history. He apparently believes that concluding an agreement with Iran will be the equivalent of President Nixon’s rapprochement with China. It’s worth recalling that, in 1972, President Nixon actually went to China where he and Chairman Mao Zedong shook hands and talked.

A not-so-lunatic prediction: The Ayatollah Khamenei will never deign to meet with President Obama, shake his hand, clink glasses of pomegranate juice and chat.

Instead, the Supreme Leader will continue to demonstrate his abiding abhorrence for “the Great Satan” and what he regards as its pathetic attempts to appease him. He believes humiliating America diplomatically is just the beginning. He foresees a future of weakness and eventual defeat for the United States. By contrast, he foresees a future of growing power and restored glory for the Islamic Republic. If you think those are lunatic predictions, you’re badly mistaken once again.

A NYT Columnist Called on Manchin to Lower the Filibuster Threshold. Could It Actually Happen?
Carson Swick
Black Lives Matter Co-Founder's Real Estate Spree Has Sparked a Little Civil War Within the Movement
Matt Vespa
Don Jr. Says Dr. Fauci Is Not the Only One with Blood on His Hands from COVID-19
Julio Rosas

The Coma Before the Storm
Townhall
'Neither were our Founders, dipsh*t': Chris Cillizza's dig at Rand Paul for 'not being a big fan of democracy' goes OH so very wrong
Twitchy
"Appalling to Watch": Australian Media Tears American Media Apart Over Its Fawning Over Biden
Redstate
BREAKING: The Babylon Bee Scores a Major Victory Over The New York Times
PJ Media