Thanksgiving - A Violation of Church and State? 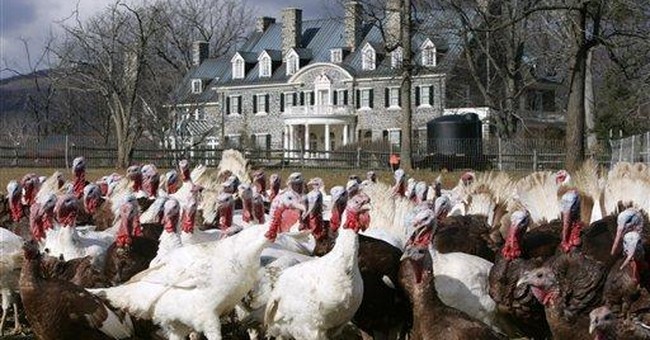 Is the government's observance of Thanksgiving a violation of the separation of church and state?

This past week, a Newsweek/Washington Post editorial labeled presidential Thanksgiving Day proclamations as "cracks in the wall of separation." The author explained, "The problem with these proclamations, it seems to me, is that they pave the way for public acceptance of gross violations of the constitutional separation of church and state." What?!

Forget for a moment that nearly every president since George Washington (and the Continental Congress before him) has given Judeo-Christian proclamations for Thanksgiving (except between 1816 and 1861) and also has declared other national days of fasting and prayer. Secularists, such as the author of the editorial, get almost giddy every time they highlight that Thomas Jefferson rejected the notion of proclaiming Thanksgiving spirituals and prayers. But the truth is Jefferson was far from the modern-day secularist they make him out to be.

Sure, Jefferson was adamant (as we all should be) that there should be no federal subscription to any one form of religious sectarianism. That is largely what the First Amendment is all about -- establishing the free exercise of religion and restricting sectarian supremacy in government, as well as government intrusion in churches.

But secularists make two grave mistakes when it comes to Jefferson and the First Amendment. First, they misconstrue his understanding of separation. Second, they overlook how Jefferson himself endorsed and intermingled religion and politics, even during his two terms as president. Let me explain, as I believe it is a timely reminder, given that we are experiencing a new round of battles in our Christmas culture war, too.

The phrase "separation of church and state" actually comes from a letter Thomas Jefferson wrote in 1802 to the Danbury Baptists. He told them that no particular Christian denomination was going to have a monopoly in government. His words, "a wall of separation between Church & State," were not written to remove all religious practice from government or civic settings, but to prohibit the domination and even legislation of religious sectarianism.

Proof that Jefferson was not trying to rid government of religious (specifically Christian) influence comes from the fact that he endorsed the use of government buildings for church meetings and services, signed a treaty with the Kaskaskia Indians that allotted federal money to support the building of a Catholic church and to pay the salaries of the church's priests, and repeatedly renewed legislation that gave land to the United Brethren to help their missionary activities among the American Indians.

Some might be completely surprised to discover that just two days after Jefferson wrote his famous letter citing the "wall of separation between Church & State," he attended church in the place where he always had as president: the U.S. Capitol. The very seat of our nation's government was used for sacred purposes. As the Library of Congress' Web site notes, "It is no exaggeration to say that on Sundays in Washington during the administrations of Thomas Jefferson (1801-1809) and of James Madison (1809-1817) the state became the church." Does that sound like someone who was trying to create an impenetrable wall of separation between church and state?

Let's face the present Thanksgiving facts. President Bush likely will give the last explicit Judeo-Christian Thanksgiving proclamation that Americans will hear for the next four to eight years, as President-elect Obama likely will coddle a form of godliness in his Thanksgiving addresses (if he indeed gives them) that appeases the masses with a deity that fits every politically correct dress.

But I'm an optimist. And because so much attention is being given right now by the media and the president-elect himself regarding his parallels to and lessons learned from President Abraham Lincoln, I recommend Obama heed Lincoln's Thanksgiving wisdom. Don't mince or water down the God of the Pilgrims, as is being done in public schools across this land through the retelling of the first Thanksgiving.

Obama doesn't even need a speechwriter for Thanksgiving 2009. He simply can recite Lincoln's Thanksgiving Day Proclamation, in which Lincoln thanked the Almighty for America's bountiful blessings and providential care despite enduring a war and grave economic hardships. The content seems divinely timed for even such a wintry season as our own:

"No human counsel hath devised, nor hath any mortal hand worked out these great things. They are the gracious gifts of the most high God, who while dealing with us in anger for our sins, hath nevertheless remembered mercy. … I do, therefore, invite my fellow citizens … to set apart and observe the last Thursday of November next as a day of thanksgiving and praise to our beneficent Father, who dwelleth in the heavens. And I recommend to them that, while offering up the ascriptions justly due to him for such singular deliverances and blessings, they do also, with humble penitence for our national perverseness and disobedience, commend to his tender care all those who have become widows, orphans, mourners or sufferers in the lamentable civil strife in which we are unavoidably engaged and fervently implore the interposition of the almighty hand to heal the wounds of the nation and to restore it, as soon as may be consistent with the divine purposes, to the full enjoyment of peace, harmony, tranquility and union."

Whatever your religious persuasion, don't hesitate this Thanksgiving to bow your head, give thanks to God, and follow Lincoln's advice. And when you do, don't forget to say a prayer for our troops and their families. While they serve us so we can serve our Thanksgiving feasts safely, the least we can do is serve them a little honor and remembrance.