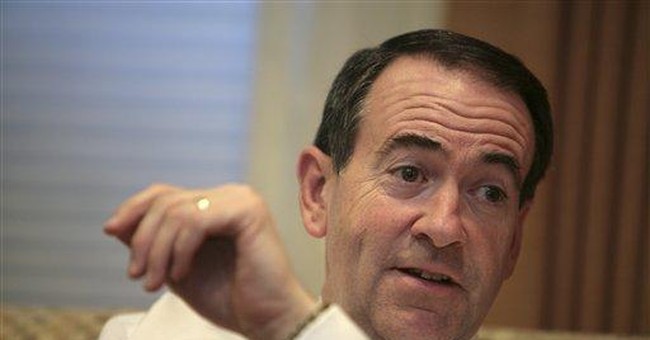 Did you catch the great showdown this past week? No, not Super Tuesday but the late-night television comedian battle over who discovered and "made" GOP presidential candidate Mike Huckabee.

While Republicans and Democrats were slugging it out at the polls, three kingpins of comedy were in chortle combat for the right to be called the creator of the GOP contender and his surge in this election race. Even they are somewhat surprised this 10-year Arkansas governor outlasted candidates such as Giuliani, Thompson and Romney to be among the finalists for the GOP nomination.

The sardonic segments about Huckabee on each of their shows are so popular that polls are popping up now in pursuit of the public's opinion to the question, "Who made Huckabee?"

It all started weeks ago, when Conan O'Brien (from "Late Night with Conan O'Brien") sarcastically claimed that I was responsible for Huckabee's surge. Then he followed that claim with another far-fetched assertion: Because he "resurrected" my career through his "'Walker, Texas Ranger' Lever" (a regular comedy bit that would highlight an unintentionally funny clip from the series), Conan alone possesses pre-eminence and proprietorship to the "Huckaboom."

Not to be outdone, Jon Stewart (from "The Daily Show") stepped into that same political-comedy ring arguing that he created O'Brien (and therefore Huckabee, too), based upon a dated MTV clip of Jon first introducing the freshman late-night host.

The three well-known comedian hosts escalated this hilarious Huckabee feud by repeatedly appearing on one another's shows in slapstick moments that marveled Three Stooges' wit and jesting. As one commentator wrote: "An increasingly ridiculous rivalry broke out between O'Brien and Colbert, later dragging Stewart into the mix. The result was some of the funniest late-night sketches in years as the personalities duked it out."

The battle seemed to be called a draw after an old-fashioned fist-'n'-bat brawl between all three -- until Colbert revealed one more trick up his sleeve: the revelation of Huckabee himself.

So, bringing a little levity in the midst of a serious run for the GOP nomination and a torn conservative party, Mike entered the fray of this late-night comedy war over his origins. Appearing by satellite, he settled the debate with a bit of his own sardonic humor: "Let's be clear: None of these guys made me. This great nation made me. So vote for me. God bless America, and forget these three idiots." He then finished the week by making a surprise appearance on "The Colbert Report," reaffirming he's still in the race and playing air hockey (with Texas!) to settle the issue.

Mike is one of the most genuinely concerned and capable leaders I've ever met. He's also a unique soul who hasn't lost touch with humanity and that Americans love to laugh -- and sometimes have to remember to do so, even in difficult times. As another commentator noted, "Mike has shown an extraordinary amount of good humor for a national politician."

As I've said on many occasions, I helped light the spark for Mike's campaign, but a spark will go out if it doesn't have a catalyst behind it. Mike's character and message turned that spark into a raging fire. And I challenge anyone who hasn't examined his platform carefully to do so. What awaits is the discovery of a full-fledged conservative.

Incidentally, regarding the three late-night comedians using my life at the center of their scornful and cynical mocking to justify their positions in creating the Huckaboom, I have something lastly to say: I suppose if I believed all those "Chuck Norris Facts" still circulating on the Internet, I'd have to believe the one today that says, "There is no theory of evolution. Just a list of creatures Chuck Norris has allowed to live." Ergo (as Conan has said), one rightfully can conclude, it is I (Chuck Norris) who actually made Conan, Colbert and Stewart -- or at least still allow them to live. And just like God might be saying to conservatives even now, I also say to them: Don't make me come down there.