Christina Herrin
|
Posted: Dec 01, 2020 12:01 AM
Share   Tweet
The opinions expressed by columnists are their own and do not necessarily represent the views of Townhall.com. 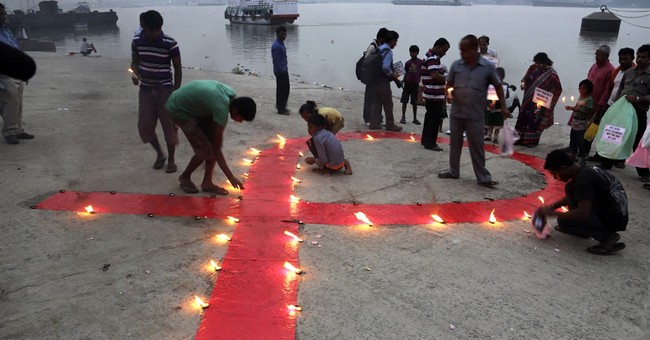 In honor of World AIDS Day, on December 1, 2020, people across the globe will unite in remembering those lost while working with those still fighting for a cure. On this day, it is important that we reflect on the progress in drug development that was initiated by AIDS activists in the late 1980s and early 1990s. Unbeknownst to many, the AIDS activist community helped reform drug approval within the Food and Drug Administration (FDA) in a way that was unprecedented, which resulted in thousands of lives saved.

As FDA bureaucracy slowly churned, thousands with HIV/AIDS were losing their lives. The goal of FDA should be to get the most safe and effective drugs to market as soon as possible, but often times the delay can be a decade or more. During the beginning of the AIDS epidemic, this process was too long and activists took to protest their government in support of removing red tape to save lives. Fortunately, it worked.

The actions and public policy agenda pushed by the activists resulted in the reform of FDA drug approval process and established an “ExpandedAvailability of Investigational New Drugs Through a Parallel Track Mechanism for People With AIDS and Other HIV-Related Disease.” Typically, a drug must past three phases of FDA approval before it can be brought to market, but under the parallel track option, AIDS patients would receive access before final stages. This resulted in the first-of-its-kind approval process, which allowed thousands of patients to gain access to a promising anti-viral drug d4T (stavudine), in 1992.

Finally, FDA approved a protease inhibitor known as saquinavir, in June 1995. This drug was approved on an open label study and was the first drug of its kind to be made available outside of ongoing clinical trials. After this unapproved therapy was administered to patients, morbidity in the AIDS community dropped substantially, to almost zero. This wonder drug was referred to as HAART, a three-way “drug cocktail,” that saved thousands of lives, if not millions.

The award winning movie, Dallas Buyer’s Club offers a descriptive perspective of what the crisis was like and what patients had to go through to merely save their own lives.

In 2020, FDA has improved its processes since the AIDS pandemic, but there is more work to be done. The Heartland Institute supports a policy project called “Free to Choose Medicine” (FTCM), which would expedite approval of life-saving treatments to patients suffering from diseases like cancer, Alzheimer’s, ALS, etc.

Innovative, unapproved therapies are paving the way for medical advancement, and yet our antiquated FDA drug approval process is still inhibiting access. To this day, research and development costs to bring a new drug to market still takes on average 12 years, and $2.9 billion. FTCM aims to lower this cost and time to make safe and affordable drugs easier to develop and bring to market.

Expanding on what AIDS activists promoted in the 1990s, FTCM would expedite approval by allowing new drugs to only pass initial safety tests and at least one efficacy test. If it is good enough to test on human subjects, it is good enough to allow companies to offer to patients suffering from debilitating diseases.

Drug sponsors would have the option to offer their product on an FTCM track, and patients that wish to access those potentially life-saving treatments would now have an option that didn’t exist before. FTCM would bring safe and effective drugs to market and patients would regain the independence to make choices about what is best for them as they fight for their lives.

Allowing patients to have access to therapies before they have received the gold stamp of approval from FDA would bring drugs to market sooner, and additionally lower costs by saving time and money on unnecessary testing. This is a patient centered approached that should be adopted to give freedom to patients, which is exactly what the brave AIDS activists fought for a few decades ago.

Christina Herrin (cherrin@heartland.org) is the government relations manager at the The Heartland Institute, a non-partisan, free-market think tank headquartered in Arlington Heights, Ill.