Democrats Are Fixated on D.C. Statehood. Why Not Puerto Rico?

Christian Josi
|
Posted: Feb 28, 2021 12:01 AM
Share   Tweet
The opinions expressed by columnists are their own and do not necessarily represent the views of Townhall.com. 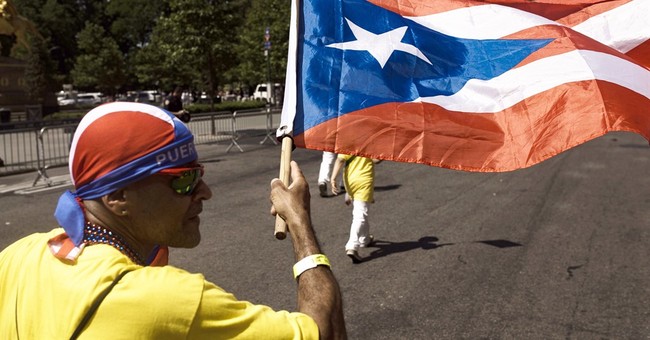 Republicans are smart to look at statehood for the District of Columbia as a way for Democrats to elect two new far left-wing senators and a bunch of House members. Democrats campaigned in the last election on the idea of ridding the Senate of the filibuster, packing the Supreme Court, and making the District of Columbia a state as a move to consolidate power. The push for D.C. statehood to the exclusion of Puerto Rican statehood is nothing more than a ploy to solidify Democratic control of the levers of power for the federal government.

Need evidence to support the idea that D.C. statehood is nothing more than a power grab? Just look back at the last election to see that D.C. was, by far, the most left leaning vote for President Joe Biden with 92.1% of the vote. Biden beat former President Trump by a whopping 86.7% in the District. Republicans are on solid footing to bet that many Democrats really want D.C. statehood over Puerto Rico, because they know that D.C. equals all Democrats. Puerto Rico, on the other hand, has a long history of electing Republicans to office.

Look no further than recent history to see the difference between the District of Columbia and Puerto Rico. The elected representative that Puerto Rico sends to Congress is Republican, Resident Commissioner Jenniffer Gonzalez. She is a member of the PNP party that caucuses with Republicans in Congress. Former Resident Commissioner and Governor Luis Fortuno is also a Republican who was elected by the people of Puerto Rico. Many have classified Puerto Rican voters as social conservatives and they are not easy to pigeon hole. That is why many look at a future state of Puerto Rico as one that will be balanced and a so called "Purple State.”

Sometimes it is instructive to look at who opposes statehood for Puerto Rico to better understand the opposition. One prominent opponent is Representative Alexandria Ocasio-Cortez (D-NY) who seems to have allied herself with supporters of some form of independence. On her website she argues that “Representative Ocasio-Cortez believes that the people of Puerto Rico have the right to self-determination. For too long, Puerto Rico has suffered the political, social, and economic consequences of disenfranchisement.” A significant majority of the 1.2 million who voted on Election Day 2020 supported statehood for Puerto Rico. If Ocasio-Cortez really supported democracy and “self-determination,” she would support statehood, yet she supports alternative legislation that would thwart the will of the majority of Puerto Rican voters who want to be a state.

Republicans know that the fight to put D.C. statehood ahead of Puerto Rico is all about partisanship and packing the Congress with far leftist Democrats. Ironically, it is the Republican Party that has long supported statehood, versus the Democrats who claim to be for diversity. Republicans in Congress, including Sens. Marco Rubio (R-FL) and Rick Scott (R-FL), have been vocal supporters with a slew of Republicans in the House. The platform of the Republican Party has long supported statehood as compared to the Democratic Party platform that has been silent. Most Democrats want D.C. statehood only because of the raw power of having two more votes in the Senate. Senate Majority Leader Chuck Schumer (D-NY) has talked down the idea of statehood for Puerto Rico because he knows that D.C. is a sure bet, yet Puerto Rico is not. Partisanship has obliterated Democrats' claim to be the party of diversity and outreach to Latino voters when they are not pushing hard to allow the millions of U.S. citizens living in the Commonwealth of Puerto Rico to join the United States as our 51st state.