Sorry for the Fringe on Top? 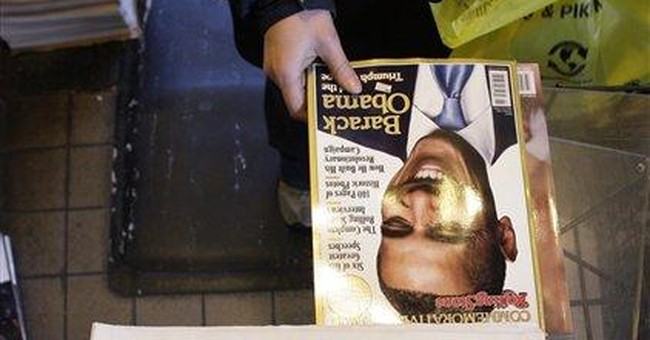 Trending
I was listening to Bill Bennett's radio show and this guy calls in, all upset that he voted for Barack Obama. So then the disgruntled caller was asked why he'd voted the way he did? The man - a white construction worker - replied he'd been angry and wanted to punish the Republicans." But now it turns out he regrets having voted for Obama, due to that recent statement by the new administration's Rob Reich...you know - the one about how they would NOT be helping white construction workers? This guy then admitted to Bennett, that he knew he'd been selfish in casting his vote. Yes, the construction worker confessed he ignored all warnings re: candidate Obama, because while punishing Republicans, he also felt that President Obama might help him personally. Hmmm...with all the concerns about Obama's radical ties, etcselfish?
Do ya think?

This is annoying enough, but then there are those who were concerned during the election, but now seem even more upset by Obama's less than bipartisan first week. Perhaps they'd lulled themselves into a false sense of security because Obama had a friendly meal over at George Will's house?
Is anybody really surprised by Obama's Gitmo order or his rescinding the New Mexico deal  with funding for abortions? Is anyone stunned that the so-called "Stimulus package" is a Christmas wish list for Democrat constituencies? (Though in actuality, they'd reject the term "Christmas" They'd call it a "Holiday Wish List")
CARTOONS | Steve Kelley
View Cartoon
At least Obama's first Presidential interview as President reached out to the Christian Broadcast Network and Jewish Television (wait a sec…he didn't do that) ...he went on Arabic Television.
So now we watch with baited breath as not-so-healing leftist fringe goals are rolled out, like those trailers of coming attractions that completely wear you out - before the film that you'd hoped to see in the first place!
Yet, any buyer's remorse syndrome reminds me of a story about my mother when she was only four years old. Mom's grandfather was a professional artist who was going to do her portrait. But, my mother wasn't happy about the prospect. Maybe, she was concerned because Great Grandpa was an immigrant. However, he was here legally, and Ireland does not surround America's borders. But seriously - she was a little girl and she probably just wasn't in the mood to sit still for any length of time.  Still - her recourse was extreme.
When the moment of truth arrived, legend has it that my mother locked her little self in her little room...but not before she had somehow gotten a hold of a pair of little scissors! Thinking she would show the adults how angry she was ...Mom cut off all her hair! It was an impulsively bold move. But like any four-year-old, she hadn't thought through the consequences. Grandma wasn't heads up when it came to hiding the scissors from determined offspring, either! But, my grandmother didn't realize that her furious young daughter would take such drastic measures. So, when I heard that guy on the radio, I thought of my defiant mom.
Okay - so this construction worker isn't happy now. He rues the fact that in a fit of pique, he voted for Barack Obama! Well, that doesn't quite cut it for me. I say he can leave his regrets in a letter to his impoverished great-grandchildren...that's if a future America hasn't gone all China on us and more than one child per family is still legal. Let him explain to them how he sure showed the Republican Party!
Decisions do have consequences. And by the way - my mother still got her portrait painted back in 1915. Now, some ninety-four years later, all that is left of her long ago childhood fit is a faded white frame, encircling a portrait of a smirking and practically bald - four year old! Well…she did have a little fringe of hair left. So when I'd see that picture, I was often reminded of the song "Surrey With The Fringe On Top."
Sure - some Republicans in Congress and some of those in control of the Party did need to get a grip. Yet now, those angry Conservative or Republican voters; who voted for Obama or refused to vote at all -are now being dragged our of their rooms anyway! But they will still be painted by the numbers. BIG NUMBERS with expansive government programs will benefit activist groups like ACORN. So, clocks are being cleaned too!
The time is up for that foolish Construction worker and those like him, who slept through the alarm last November. Sure - he's chagrinned because in teaching Republicans a lesson - he's the one who is getting a fast education now! And we will hear about it ad nauseum on all conservative talk radio, until perhaps "The Fairness Doctrine" kicks in. What the Left once called "Patriotic dissent", may be curbed severely. That's because many became "Born Again Americans" last week. (I got an email from an actor friend actually calling himself the latter…swell.) So we can try to lock ourselves in our rooms, but we are still getting our picture of the future. Perhaps we'll be forced to say goodbye to anything, remotely considered divisive.
Meanwhile, I recall hearing of another radio program, broadcast during another time of war. And in signing off, the host, Jimmy Durante would bid a fond farewell to his listeners. So in homage to Mr. Durante, I now say a grim "thanks a lot" to our construction guy - and  "Goodnight Mrs.Calabash, where ever you are!"

I know some will grow hair on their chests, but I don't know if our nation's collective common sense can ever fully grow back. Thanks to that - yes - selfish caller, and many like him - a leftist fringe may frame America's future for the next 94 years! For those worried about the survival of our country...it's just not a pretty picture.
Trump Is Going Out of His Way to Campaign Against This Republican
Bronson Stocking