Charlotte Hays
|
Posted: Apr 15, 2016 12:01 AM
Share   Tweet
The opinions expressed by columnists are their own and do not necessarily represent the views of Townhall.com. 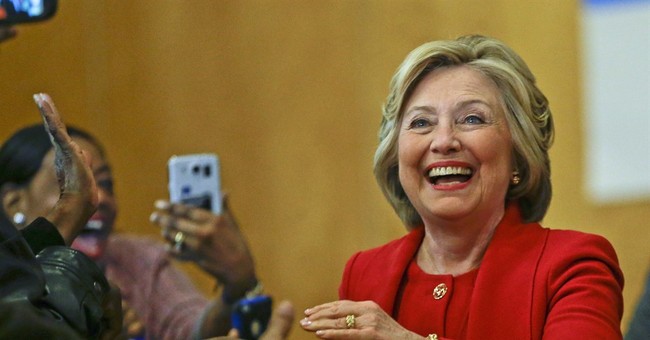 If Hillary Clinton has a favorite holiday, it just might be Equal Pay Day, the bogus feminist holiday "celebrated" earlier this week on April 12.

Equal Pay Day is Christmas for feminists, that merry time of the year when they mobilize to demand that Congress pass laws to close an alleged 79 cents on the dollar gender pay gap that virtually disappears when the choices women make about work are factored into the equation.

But feminists cling to the illusion of a 79 cents gap that needs government remediation like an aging child clings to her similarly valuable belief in the jolly old gent from the North Pole. Indeed, Mrs. Clinton formally announced her candidacy for the presidency last year on this sacred day, and this year observed the solemnity by talking up the gender pay gap at a roundtable discussion in New York.

“Last time I checked, there’s no discount for being a woman,” Clinton said at the event, sponsored by an organization called Glassdoor. “Groceries don’t cost us less, rent doesn’t cost us less, so why should we be paid less?”

Nobody would quibble with that--least of all working women. Do you actually know anybody who believes that women should be paid less than men on the basis of gender, a practice that has been illegal in the United States since the 1960s? But what Mrs. Clinton wants are more laws—even if they have little to do with preventing actual discrimination or helping women earn more.  At the New York event, Mrs. Clinton advocated for the Paycheck Fairness Act, which would encourage more class action suits—which are a wonderful money-maker for high priced lawyers, but don’t do much to promote fairness or help regular female workers—and pretty much do in merit pay.

There is another plan to promote prosperity for women--and for men!--that involves a lessening of government control of our lives and reliance on the belief that we can make decisions for ourselves.

The Independent Women's Forum has just released "Working for Women: A Modern Agenda for Improving Women's Lives," which has prescriptions far different from what Mrs. Clinton proposes. (Disclaimer: I am employed by the IWF.) The IWF proposals aim to help women by creating a growing economy with a variety of jobs and benefit packages. The emphasis is on freeing people up to make choices rather than relying on government mandates. Work is rewarded and thus individuals keep more of what they earn. Greater control over your own resources is the cornerstone of the IWF plan.

To promote these ends, "Working for Women" puts forward such commonsense proposals as reforming the tax code to reduce burdens on families and businesses. It is important to fix the tax code so that a family with two married parents is not penalized when both work. IWF proposes reducing some of the stringent day care regulations that all too often make the service unaffordable. Licensing restrictions on the kinds of businesses women might run from home, such as braiding, should be reduced, allowing more women to own small, home-based businesses.

Some of IWF's proposals are rhetorically harder sells than the ones Hillary Clinton advocates--but they would work better for women and families but they don't grab you like the offer of something "free." For example, Clinton is a big supporter of mandatory, paid family leave, which sounds just great until you realize that employers that can’t pay for the extra benefits, will have to limit hiring or even cut jobs. By contrast, IWF proposes "Personal Care Accounts," which make it easier to save for leave and could be a vehicle for charities to support paid leave for workers lacking the benefit. Not as sexy as the mandatory policy--but employers aren't going to find they have to lay off anybody because of a PCA.

"We want to change the conversation," said Sabrina Schaeffer, IWF’s executive director. "Working for Women lays out an alternative vision for helping women, in which they have more control over the most pressing parts of their lives. Our call to modernize laws and roll-back burdensome labor regulations is the best way to ensure women can pursue their own vision of happiness and success."

Certainly this is a conversation that needs changing. Too often, the Equal Pay Day crowd has the rhetorical advantage--who doesn't want to have the government step in and order the boss to provide sixteen weeks of paid leave? To have the government order that their bosses must pay them more?  But the public needs to understand that both of these actions lead to higher unemployment and hurt those at bottom the most.

A new report entitled "Employment Status Affects Our Morals Around Money" was conducted in Spain but has enormous implications for the U.S. It found that people who have been unemployed for a length of time come to believe that the employed should not be allowed to keep their earnings.

We don’t want our country to head further down this road of envy and redistribution.  Rather we want more people to find jobs that provide purpose and the satisfaction and independence of work.  The IWF plan takes us in that direction by encouraging job creation and making sure people have more control of their resources. What a refreshing change from the victim-mentality and empty government promises of Equal Pay Day.