A Glimmer of Hope for American Academia? 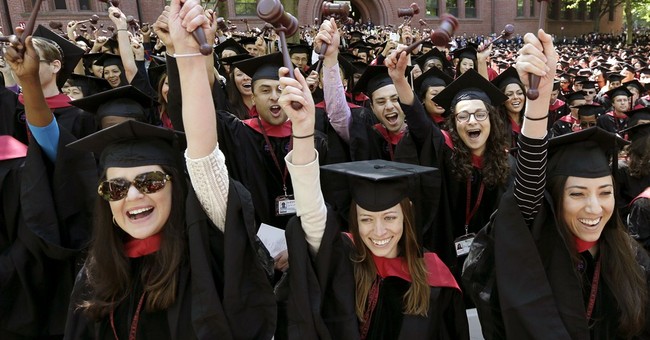 When twenty-eight current and former Harvard Law School professors issued a public statement decrying the university’s new procedures regarding the handling of sexual assault accusations on campus, it may have been a game changer.

Harvard’s Sexual Harassment Policy and Procedures make it easier to punish the accused without giving him (and it is generally a him) anything that remotely resembles a fair hearing. The procedures are the result of pressure from the Obama administration, which threatens to withhold federal dollars from schools that do not follow its diktats. It will do so under the aegis of the seemingly protean Title IX, the 1972 law against gender discrimination.

Until now, the fight to prevent the Obama administration from eroding the rule of law in the (supposed) name of protecting college women from harassment has been a largely conservative cause.

But on October 15, this was no longer the case. On that day, in a move that surprised those of us who have given up on academia as hopelessly PC and slavishly pro-Obama, the Harvard law professors joined the fray with an open letter in the Boston Globe that stated “strong objections” to the just announced policies.

“Harvard has adopted procedures for deciding cases of alleged sexual misconduct which lack the most basic elements of fairness and due process, are overwhelmingly stacked against the accused, and are in no way required by Title IX law or regulation,” the law professors write. They are concerned about the failure to provide the accused with an opportunity to find the facts, confront witnesses, or present a defense.

They are also critical that the entire process is to be handled by the Title IX compliance office rather than an entity that is “structurally impartial” and charge that sexual assault has been redefined in ways that go significantly beyond Title IX. This is a hit at the Obama administration’s beefed up use of Title IX as the mechanism for pushing an agenda that casts the Obama administration—not the legal system—as the college woman’s best protector against sexual assault.

While I urge college girls (and boys) not to get drunk and engage in sexual activity, I was nevertheless glad to see that the Harvard profs found the “rules governing sexual conduct between students both of whom are impaired or incapacitated” to be “starkly one-sided as between complainants and respondents, and entirely inadequate to address the complex issues in these unfortunate situations involving extreme use and abuse of alcohol and drugs by our students.”

Alcohol is a particularly fraught subject when it comes to sex on campus, and, as a certified prude and chivalry advocate, I guess I should be willing to throw the book at any young man who engages in sex with a woman who is under the influence. But this can be ambiguous.

A young woman who’s had a few too many—we’re not talking supine and unconscious—can make the wrong decision. The next day, she wishes she’d said “no.” She decides that she is a rape victim.

Under the new procedures, the young man will likely be kicked out of school, without having a chance to defend himself or present character witnesses. It is tedious and emotionally draining to have to prove guilt—but shortcutting the process has its own dangers.

But one thing is becoming apparent: going after due process may be the beginning of the waking up true liberals—those who value truly valuable the concepts of individual rights and core protections such as those at the core of our legal system—to how illiberal many of the Progressive left's are. . As Charles C. W. Cooke observed at National Review Online, writing about the new Obama administration-inspired “yes means yes” law in California, due process is as important now as it was in the time of the Magna Carta.

Indeed, Cathy Young has observed a “liberal backlash” against the draconian denial of due process, including people such as George Washington University law professor John Banzhaf, who describes himself as a “radical feminist.” Banzhaf recently spoke out in favor of due process in a press release bearing the headline “Illegals at Border Have More Rights Than College Students Accused of Rape.”

The Harvard law professors added another dimension to the discussion: money. The federal government is threatening to withhold significant funding from any higher ed institution that doesn't fall in line with its recommendations. Deep-pocketed Harvard ought to reject such strong-arm tactics.

“We recognize that large amounts of federal funding may ultimately be at stake,” they wrote. “But Harvard University is positioned as well as any academic institution in the country to stand up for principle in the face of funding threats. The issues at stake are vitally important to our students, faculties, and entire community.”

Can anything good come out of American academia? Harvard’s Gang of 28 have given us a glimmer of hope that the Obama administration is not going to get away with eliminating due process.