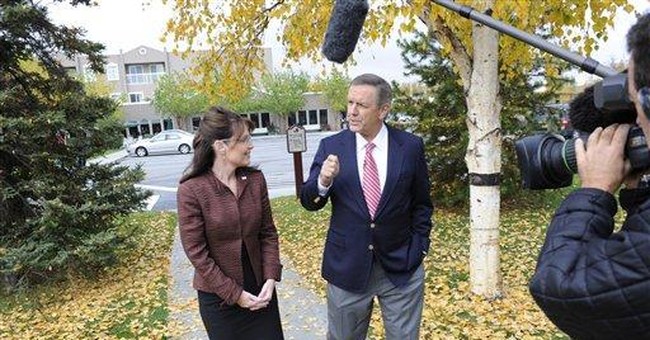 "Ms. Palin most visibly stumbled when she was asked by Mr. Gibson if she agreed with the Bush doctrine. Ms. Palin did not seem to know what he was talking about. Mr. Gibson, sounding like an impatient teacher, informed her that it meant the right of `anticipatory self-defense.'" -- New York Times, Sept. 12

There is no single meaning of the Bush doctrine. In fact, there have been four distinct meanings, each one succeeding another over the eight years of this administration -- and the one Charlie Gibson cited is not the one in common usage today.

He asked Palin, "Do you agree with the Bush doctrine?"

She responded, quite sensibly to a question that is ambiguous, "In what respect, Charlie?"

Sensing his "gotcha" moment, Gibson refused to tell her. After making her fish for the answer, he grudgingly explained to the moose-hunting rube that the Bush doctrine "is that we have the right of anticipatory self-defense."

I know something about the subject because, as the Wikipedia entry on the Bush doctrine notes, I was the first to use the term. In the cover essay of the June 4, 2001, issue of The Weekly Standard titled, "The Bush Doctrine: ABM, Kyoto, and the New American Unilateralism," I suggested that the Bush administration policies of unilaterally withdrawing from the ABM treaty and rejecting the Kyoto protocol, together with others, amounted to a radical change in foreign policy that should be called the Bush doctrine.

Then came 9/11, and that notion was immediately superseded by the advent of the war on terror. In his address to Congress nine days later, Bush declared: "Either you are with us, or you are with the terrorists. From this day forward, any nation that continues to harbor or support terrorism will be regarded by the United States as a hostile regime." This "with us or against us" policy regarding terror -- first deployed against Pakistan when Secretary of State Colin Powell gave President Musharraf that seven-point ultimatum to end support for the Taliban and support our attack on Afghanistan -- became the essence of the Bush Doctrine.

Until Iraq. A year later, when the Iraq War was looming, Bush offered his major justification by enunciating a doctrine of pre-emptive war. This is the one Charlie Gibson thinks is the Bush doctrine.

It's not. It's the third in a series and was superseded by the fourth and current definition of the Bush doctrine, the most sweeping formulation of Bush foreign policy and the one that most distinctively defines it: the idea that the fundamental mission of American foreign policy is to spread democracy throughout the world. It was most dramatically enunciated in Bush's second inaugural address: "The survival of liberty in our land increasingly depends on the success of liberty in other lands. The best hope for peace in our world is the expansion of freedom in all the world."

This declaration of a sweeping, universal American freedom agenda was consciously meant to echo John Kennedy's pledge that the United States "shall pay any price, bear any burden ... to assure the survival and the success of liberty." It draws also from the Truman doctrine of March 1947 and from Wilson's 14 points.

If I were in any public foreign policy debate today, and my adversary were to raise the Bush doctrine, both I and the audience would assume -- unless my interlocutor annotated the reference otherwise -- that he was speaking about Bush's grandly proclaimed (and widely attacked) freedom agenda.

Not the Gibson doctrine of pre-emption.

Not the unilateralism that characterized the pre-9/11 first year of the Bush administration.

Presidential doctrines are inherently malleable and difficult to define. The only fixed "doctrines" in American history are the Monroe and the Truman doctrines, which came out of single presidential statements during administrations where there were few conflicting foreign policy crosscurrents.

Such is not the case with the Bush doctrine.

Yes, Palin didn't know what it is. But neither does Gibson. And at least she didn't pretend to know -- while he looked down his nose and over his glasses with weary disdain, "sounding like an impatient teacher," as the Times noted. In doing so, he captured perfectly the establishment snobbery and intellectual condescension that has characterized the chattering classes' reaction to the phenom who presumes to play on their stage.