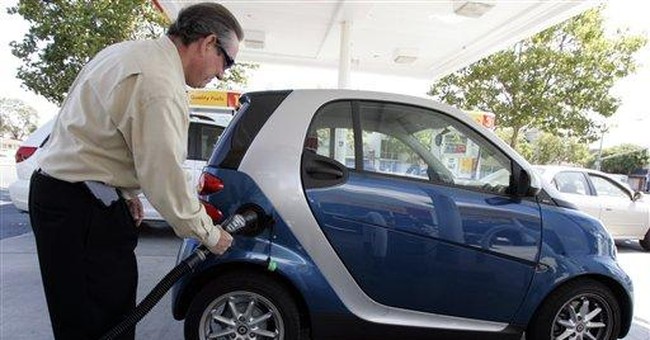 WASHINGTON -- House Speaker Nancy Pelosi opposes lifting the moratorium on drilling in the Arctic National Wildlife Refuge and on the Outer Continental Shelf. She won't even allow it to come to a vote. With $4 gas having massively shifted public opinion in favor of domestic production, she wants to protect her Democratic members from having to cast an anti-drilling election-year vote. Moreover, given the public mood, she might even lose. This cannot be permitted. Why? Because as she explained to Politico: "I'm trying to save the planet; I'm trying to save the planet."

A lovely sentiment. But has Pelosi actually thought through the moratorium's actual effects on the planet?

production has declined a staggering 47 percent. The world consumes 86 million barrels a day; the United States, roughly 20 million. We need the stuff to run our cars and planes and economy. Where does it come from?

Places like Nigeria where chronic corruption, environmental neglect and resulting unrest and instability lead to pipeline explosions, oil spills and illegal siphoning by the poverty-stricken population -- which leads to more spills and explosions. Just this week, two Royal Dutch Shell pipelines had to be shut down because bombings by local militants were causing leaks into the ground.

Compare the Niger Delta to the Gulf of Mexico where deep-sea U.S. oil rigs withstood Hurricanes Katrina and Rita without a single undersea well suffering a significant spill.

The United States has the highest technology to ensure the safest drilling. Today, directional drilling -- essentially drilling down, then sideways -- allows access to oil that in 1970 would have required a surface footprint more than three times as large. Additionally, the U.S. has one of the most extensive and least corrupt regulatory systems on the planet.

Does Pelosi imagine that with so much of America declared off-limits, the planet is less injured as drilling shifts to Kazakhstan and Venezuela and Equatorial Guinea? That Russia will be more environmentally scrupulous than we in drilling in its Arctic?

Democrats want no oil from the American OCS or ANWR. But of course they do want more oil. From OPEC. From where Americans don't vote. From places Democratic legislators can't see. On May 13, Sen. Chuck Schumer -- deeply committed to saving just those pieces of the planet that might have huge reserves of American oil -- demanded that the Saudis increase production by a million barrels a day. It doesn't occur to him that by eschewing the slightest disturbance of the mating habits of the Arctic caribou, he is calling for the further exploitation of the pristine deserts of Arabia. In the name of the planet, mind you.

The other panacea, yesterday's rage, is biofuels: We can't drill our way out of the crisis, it seems, but we can greenly grow our way out. By now, however, it is blindingly obvious even to Democrats that biofuels are a devastating force for environmental degradation. It has led to the rape of "lungs of the world" rainforests in Indonesia and Brazil as huge tracts have been destroyed to make room for palm oil and sugar plantations.

Here in the U.S., one out of every three ears of corn is stuffed into a gas tank (by way of ethanol), causing not just food shortages abroad and high prices at home, but intensive increases in farming with all of the attendant environmental problems (soil erosion, insecticide pollution, water consumption, etc.).

This to prevent drilling on an area in the Arctic one-sixth the size of Dulles Airport that leaves untouched a refuge one-third the size of Britain.

There are a dizzying number of economic and national security arguments for drilling at home: a $700 billion oil balance-of-payment deficit, a gas tax (equivalent) levied on the paychecks of American workers and poured into the treasuries of enemy and terror-supporting regimes, growing dependence on unstable states of the Persian Gulf and Caspian basin. Pelosi and the Democrats stand athwart shouting: We don't care. We come to save the planet!

They seem blissfully unaware that the argument for their drill-there-not-here policy collapses on its own environmental terms.