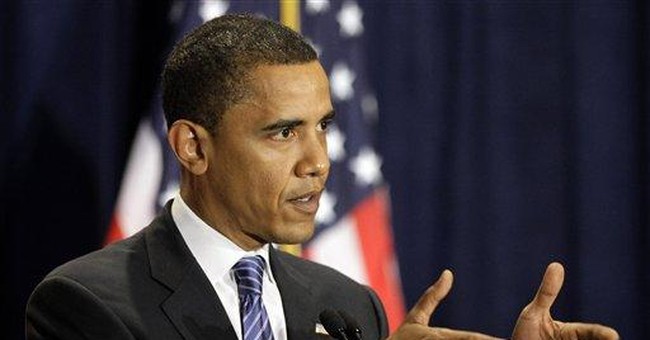 "To be clear: Barack will support a filibuster of any bill that includes retroactive immunity for telecommunications companies." -- Obama spokesman Bill Burton, Oct. 24, 2007

WASHINGTON -- That was then: Democratic primaries to be won, netroot lefties to be seduced. With all that (and Hillary Clinton) out of the way, Obama now says he'll vote in favor of the new FISA bill that gives the telecom companies blanket immunity for post-9/11 eavesdropping.

Back then, in the yesteryear of primary season, he thoroughly trashed the North American Free Trade Agreement, pledging to force a renegotiation, take "the hammer" to Canada and Mexico, and threaten unilateral abrogation.

Today, the hammer is holstered. Obama calls his previous NAFTA rhetoric "overheated" and essentially endorses what one of his senior economic advisers privately told the Canadians: The anti-trade stuff was nothing more than populist posturing.

Nor is there much left of his primary season pledge to meet "without preconditions" with Iran's Mahmoud Ahmadinejad. There will be "preparations," you see, which are being spun by his aides into the functional equivalent of preconditions.

Obama's long march to the center has begun.

And why not? What's the downside? He won't lose the left, or even mainstream Democrats. They won't stay home on Nov. 4. The anti-Bush, anti-Republican sentiment is simply too strong. Election Day is their day of revenge -- for the Florida recount, for Swift-boating, for all the injuries, real and imagined, dealt out by Republicans over the last eight years.

Normally, flip-flopping presidential candidates have to worry about the press. Not Obama. After all, this is a press corps that heard his grandiloquent Philadelphia speech -- designed to rationalize why "I can no more disown (Jeremiah Wright) than I can disown my white grandmother" -- then wiped away a tear and hailed him as the second coming of Abraham Lincoln. Three months later, with Wright disowned, grandma embraced and the great "race speech" now inoperative, not a word of reconsideration is heard from his media acolytes.

Worry about the press? His FISA flip-flop elicited a few grumbles from lefty bloggers, but hardly a murmur from the mainstream press. Remember his pledge to stick to public financing? Now flush with cash, he is the first general-election candidate since Watergate to opt out. Some goo-goo clean-government types chided him, but the mainstream editorialists who for years had been railing against private financing as hopelessly corrupt and corrupting, evinced only the mildest of disappointment.

Indeed, The New York Times expressed a sympathetic understanding of Obama's about-face by buying his preposterous claim that it was a pre-emptive attack on McCain's 527 independent expenditure groups -- notwithstanding the fact that (a) as Politico's Jonathan Martin notes, "there are no serious anti-Obama 527s in existence nor are there any immediate plans to create such a group" and (b) the only independent ad of any consequence now running in the entire country is an AFSCME-MoveOn.org co-production savaging McCain.

True, Obama's U-turn on public financing was not done for ideological reasons, it was done for Willie Sutton reasons: That's where the money is. It nonetheless betrayed a principle that so many in the press claimed to hold dear.

As public financing is not a principle dear to me, I am hardly dismayed by Obama's abandonment of it. Nor am I disappointed in the least by his other calculated and cynical repositionings. I have never had any illusions about Obama. I merely note with amazement that his media swooners seem to accept his every policy reversal with an equanimity unseen since the Daily Worker would change the party line overnight -- switching sides in World War II, for example -- whenever the wind from Moscow changed direction.

The truth about Obama is uncomplicated. He is just a politician (though of unusual skill and ambition). The man who dared say it plainly is the man who knows Obama all too well. "He does what politicians do," explained Jeremiah Wright.

When it's time to throw campaign finance reform, telecom accountability, NAFTA renegotiation or Jeremiah Wright overboard, Obama is not sentimental. He does not hesitate. He tosses lustily.

Why, the man even tossed his own grandmother overboard back in Philadelphia -- only to haul her back on deck now that her services are needed. Yesterday, granny was the moral equivalent of the raving Reverend Wright. Today, she is a featured prop in Obama's fuzzy-wuzzy get-to-know-me national TV ad.

Not a flinch. Not a flicker. Not a hint of shame. By the time he's finished, Obama will have made the Clintons look scrupulous.