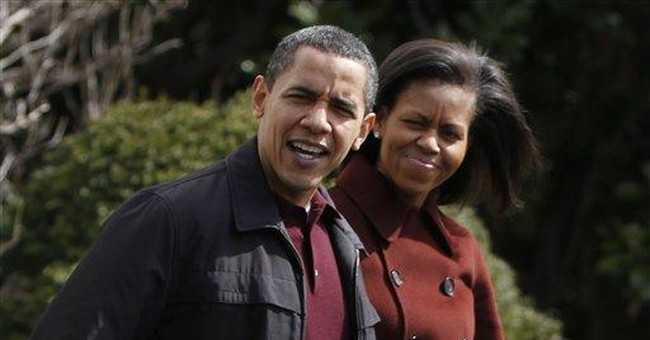 Barack Obama spent a lot of the last week trying to convince Americans that he was just one of us. Sitting on the sofa at “The Tonight Show,” he worked hard to prove that he’s a regular guy -- offhandedly referencing “American Idol,” talking about his daughters’ love for candy, sharing our outrage at the government’s mishandling of TARP money. Earlier in the week, he let the country in on his predictions for the NCAA Men’s Basketball Championship.

The problem, of course, is that once a president goes too far acting like an “ordinary guy,” well, that’s how he’s going to be treated. Learning that the President had disparaged their teams’ chances, Duke’s coach, Mike Krzyzewski, suggested that “the economy is something that [Obama] should focus on, probably more than the brackets,” while Oklahoma Sooners coach Jeff Capel suggested that “the President stick to running the country.”

One sometimes suspects that Obama makes such an effort to seem like a regular guy because, on some level, he suspects he isn’t – and because he doubts Americans’ capacity to support or relate to him unless he constantly shores up his everyman credibility. Hence his wife’s assurances that she’s the one who helps him “keep it real,” the President’s studied informality with the press and others, and the repeated discussion of the pending purchase of the new White House pet (yet another campaign promise still unfulfilled).

What Obama doesn’t seem to understand is that if a President and his policies command Americans’ respect and support, he doesn’t need to be “typical” (after all, how many of us were Hollywood movie stars like Ronald Reagan?). The difficulty for Obama, of course, is that opposition to his policies and public doubts about him are growing.

Chatting with Jay Leno doesn’t solve the problem. Even had Obama’s appearance been unmarred by a swipe at the athletes in the Special Olympics, it would simply have enhanced his likability – not secured Americans’ respect. Far from it, in fact.

Because America (thankfully) has no monarchy, and its leader is simply a citizen elected for a four-year term, the office of President has only the dignity bestowed on it by history and by the behavior of its inhabitants. Something intangible but nonetheless real is tarnished when the President puts himself on a par with a movie star trying to promote a new release. It suggests that an economic plan can (and should) be sold much like a new blockbuster – and that the job of the President himself is simply to curry public favor, much like a charming, handsome leading man.

Of course, most Americans would agree that a President has to do more than mouth the words written for him by others, as an actor does. That’s why it was particularly unfortunate for the administration that this was the week that a funny new blog, purportedly written by “Obama’s Teleprompter,” came to widespread public attention. It’s based on reports that President Obama is unusually dependent on the use of a teleprompter for his public appearances, having even used one for a simple address in a rodeo ring. One can hardly blame Republicans – after eight years of a tongue-twisted Bush presidency, and all the now-discredited charges that President Ronald Reagan simply “read lines” that were given to him – for embracing a meme that so perfectly crystallizes their concerns about President Obama. What’s remarkable is that others less partisan are laughing along.

That’s a dangerous development for a new president – especially one as young and inexperienced as Barack Obama. He was presented to the American electorate – by his own campaign and by the press, as well – as a person of intellectual substance. Even his critics have credited him with an impressive intellect. But now, the doubts are increasing, and more and more Americans are beginning to wonder whether Obama is really up to the job.

How ironic that the President decided to portray himself as “the common man” just as an increasing number of Americans begin to suspect that, truly, that’s all he is.