The Unique Threat of John McCain 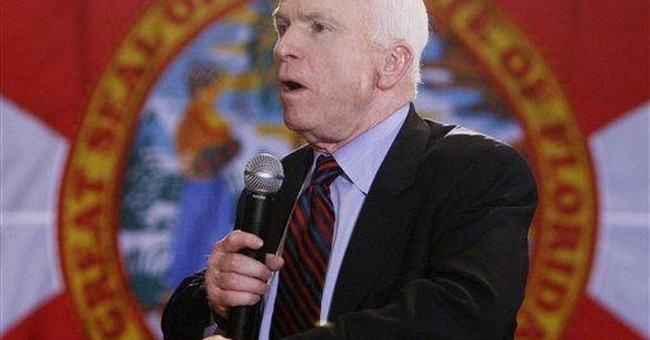 Last week, Bill Clinton took pains to point out that a Hillary Clinton-John McCain match-up would be “the most civilized election in American history” because the candidates “like and respect each other” so much. Perhaps the President was addressing the multitude of Americans who can’t stomach the prospect of the slash-and-burn tactics now being deployed against Barack Obama lasting all the way to November.

But Clinton’s remarks only reinforce the concerns that so many Republicans have about John McCain already. Whenever a Democrat praises a Republican’s “civility” there’s reason to beware. Remember The New York Times extolling the “innate civility” of Bob Michel – the man who complacently led the Republicans during their long tenure in the House minority? “Civil” Republicans, the ones who are “liked” and “respected” by Democrats, are those who have minimal interest in advancing a conservative agenda.

Although there is much to praise in McCain’s defense record (most notably, his support for the surge in Iraq), when it comes to a domestic agenda, he’s about the most “civil” Republican a Democrat could hope for. Indeed, in a McCain presidency with a Democratic Congress, conservatives risk becoming irrelevant.

In considering the likely nature of a McCain presidency, the example of California Governor Arnold Schwarzenegger is instructive. Always known as a moderate, he came to power by advocating fiscal responsibility, education reform, and a host of other issues that persuaded conservatives to support him. After it became apparent that his reform agenda was doomed, however, Schwarzenegger made common cause with his one-time partisan opponents. Together, Governor Schwarzenegger and Democrat legislative leaders rule California; conservatives (and to a great extent, Republicans generally) are simply left out in the cold.

McCain’s history is littered with examples of his eagerness to work across the aisle; the McCain-Kennedy immigration bill, McCain-Feingold campaign finance “reform,” and McCain-Lieberman environmental legislation come instantly to mind. There’s no doubt that John McCain has earned the praise of Democrats and The New York Times by being willing to support their pet causes. What’s not as clear is an example of McCain taking a hard line against the Democrats on any controversial domestic issue dear to conservative hearts (his crusade against government waste hardly counts – who, after all, is in favor of government waste?).

Given his record, it’s entirely possible that a President McCain could get a lot done with a Democratic Congress. The problem is that his “achievements” could become the stuff of conservative nightmares. Any Republican more comfortable taking questions from Tim Russert than Sean Hannity is hardly well-positioned to resist leftward pressures from the Washington establishment.

Conservatives must be aware that, liberated from the constraints imposed on him by a campaign, a President McCain would lack any incentive to continue even the grudging outreach he’s offered them so far. What’s more, McCain surely would know, given the gravity of the issue, that he could count on Republican support for a vigorous prosecution of the war on terror – along with a few Democrats who would, no doubt, gladly help him out in exchange for his support on an important domestic issue.

Given his admirable record in the war on terror, even a President McCain is infinitely preferable to any Democrat alternative. But any Republicans who support McCain in the primaries should understand that they risk driving conservatism to the sidelines at home.