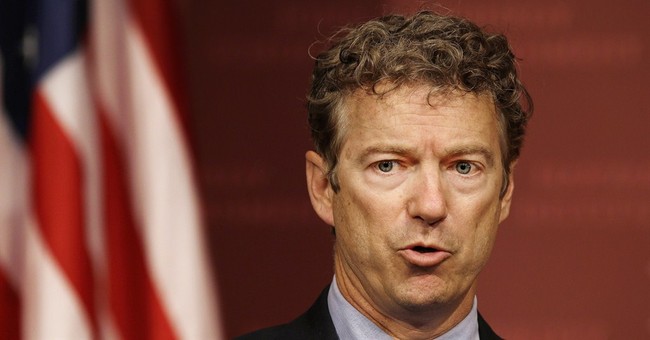 Republican Senator Rand Paul is an isolationist. This ought to make him a natural ally for appeasers like Steve Walt and John Mearshimer and the whole blame Israel first crowd.

And indeed, he has taken positions, like opposing additional sanctions on Iran that placed him in their camp.

But Paul is a mixed bag.

Paul’s conditions for maintaining aid would have required the President to certify to Congress that the PA – run jointly by Hamas, Islamic Jihad and the PLO –formally and publicly recognized Israel as a Jewish state; renounced terrorism; purged all individuals with terrorist ties from its security services; terminated all anti-American and anti-Israel incitement, publicly pledged not to engage in war with Israel; and honored previous agreements signed between the PLO and Israel.

Paul’s bill was good for America. Maintaining financial support for the Palestinian Authority in the aftermath of the PLO’s unity-with-terrorists deal constitutes a breach of US anti-terror law.

Financing the PA also harms US national security. Hamas and Islamic Jihad are financed by Iran. So by funding the PLO’s PA, which just united its forces with theirs, the US is subsidizing Iran’s terror network.

Ending US financing of the PA would certainly be good for Israel. Indeed, just by sponsoring the bill Paul has helped Israel in two critical ways. He offered Israel friendship, and he began a process of changing the mendacious narrative about the nature of the Palestinian conflict with Israel to one based on the truth.

By extending his hand to Israel, Paul gave Israel an opening to build relationships with political forces with which it has not traditionally had close ties. Because most of Israel’s supporters in Washington support an interventionist US foreign policy, isolationists like Paul have generally either stood on the sidelines of the debate, or in light of their desire to beat a quick retreat from the region, they have been willing, even happy to support the Arabs against Israel and blame Israel’s supporters for getting the US involved in the Middle East.

The hard truth is that while American isolationism is bad for the US, it isn’t necessarily bad for Israel. To date, under Democratic and Republican administrations alike, there has been a direct correlation between the level of US involvement in Israel’s affairs and US hostility towards Israel.

Paul’s pro-Israel detractors note that he also supports cutting off US military aid to Israel.

But that doesn’t necessarily make him anti-Israel.

Despite the protestations of AIPAC and other pro-Israel groups, it is far from clear that Israel would be worse off if it stopped receiving US aid. Indeed, it is likely that Israel’s economy and military strength would both be enhanced by the strategic independence that an aid cut-off would bring about.

Yes, Paul is a complicated character. But that doesn’t make him Israel’s enemy. His bill was an act of friendship. And Israel can use more friends in Washington who actually do things that help it rather than suffice with declaring their support for Israel while standing by as its reputation is trashed.

And that’s the thing of it. The Obama administration can’t stop trash talking Israel. And more than ever before, Israel needs allies who are willing to take real action to defend it.

Israel received yet another reminder of this basic fact last Friday when Yedioth Aharonoth’s senior writer Nahum Barnea published an interview with unnamed “senior American officials” involved in the Israeli-Palestinian negotiations. Those “officials,” it quickly became apparent, turned out to be the one and only Martin Indyk, Secretary of State John Kerry’s senior mediator.

In that interview, Indyk showed that among members of the Obama administration, Israel is friendless. Indyk’s interview, like serial anti-Israel statements made by Kerry, (most recently his anti-Semitic “Israel apartheid” remarks to the Trilateral Commission), and by President Barack Obama himself, was notable for its utter hostility to Israel and its Jewish leaders.

Not only did Indyk blame Israel for the failure of Kerry’s “peace process.” Like Obama and Kerry, Indyk insisted that Israel’s failure to bow to every PLO demand has opened it to the prospect of a renewed Palestinian terror war against it, to international isolation and to European trade embargoes.

From the perspective of continued US aid to the PA, by far the most important part of Indyk’s remarks, like those that Kerry made to the Trilateral Commission, was his claim that the Palestinians will likely respond to the failure of Kerry’s peacemaking by initiating another terror war against Israel.

Indyk’s assertion – or was it a threat? – was notable because the US government is training and financing the Palestinian forces that would be directing the terror war.

Since 2007, the US has spent billions of dollars financing and training Palestinian security services and transforming them into a professional military. Trained using US doctrine, they are the strongest military force the Palestinians have ever fielded against Israel.

These forces – commanded by Abbas – share his supportive view of the terrorist mass murder of Jews. They share his position that Israel has no right to exist, that Jews have no history and are not a nation.

Since 1996, every Palestinian terror campaign has been directed by these security services. And as US Lt. Gen. Keith Dayton, who served as the first commander of the US training mission has stated publicly, these US trained forces can be expected to turn their guns at Israel.

While the PLO was competing with Hamas for leadership, Abbas deployed these US trained forces against Hamas. Now that the PLO and Hamas are unified, these operations will necessarily end.

Moreover, these US trained forces are already involved in terrorism. Over the past six months, IDF commanders have repeatedly pointed fingers at PA security forces claiming that the steep rise in terrorist attacks against Israelis in Judea and Samaria is being organized and directed by them.

This is brings us to the second reason why Paul’s initiative is so critical. While it is important for Israel to find new friends in Washington, it is vital for it to change the narrative about the Palestinians and their conflict with Israel.

The false narrative, which claims that the PLO is moderate and that Mahmoud Abbas is a statesman and a man of peace, has made Israel’s old friends in Washington unable to understand reality. So unlike Paul, these friends are incapable of taking actions that actually advance Israel’s interests and strengthen its alliance with the US.

The false narrative of PLO moderation has monopolized the discourse on the Palestinians to the point where adherence to the two-state policy has more in common with a religious faith than a policy preference.

Indyk’s hysterical assault on Israel is textbook behavior of a believer lashing out at a person who exposes the utter falsity of his faith.

The believer cannot disown his phony messiah. So his only option is to present the party that unmasked the lie as the devil.

But while Indyk’s faith is fanatical, many others share it in more moderate, but still devastating forms. And they too lash out at anyone who exposes their irrationality.

Case in point is the pro-Israel community’s opposition to Paul’s bill.

The day after Paul introduced his bill, AIPAC came out against it. AIPAC opposed the bill, according to the Washington Post’s Jennifer Rubin, (who herself violently opposed it), because its leadership believes that the PA security forces play a key role in fighting Hamas.

So a week after the Israeli government formally ended negotiations because the PA supports terror, AIPAC opposed ending US aid to the PA because, AIPAC claimed, it fights terror.

For her part, Rubin railed against Paul’s initiative claiming that it was “a phony pro-Israel bill.”

Paul submitted his bill for unanimous consent in order to fast track it to a vote and into law. AIPAC convinced some senators to vote against Paul’s bill, and so killed it.

In an interview with Newsmax’s Steve Maltzberg after the vote, Paul attacked AIPAC saying, “I think the American people, if they knew that [AIPAC opposed his bill], would be very, very upset and think, you know what, those people are no longer lobbying in favor of America and Israel if they’re not willing to put restrictions on aid to Palestine.”

In other words, Paul was saying, it is time to move on, and those who insist on acting as though nothing has changed since 1994 are not behaving as one would expect Israel’s friends to behave.

And he is right.

Paul may be a cynical opportunist. But that’s better than a messianic that prefers to believe that Israel is the devil than accept that the Peace Fairy doesn’t exist.

And yes, his refreshing embrace of the truth as the basis for US policymaking makes him a better friend to Israel today than AIPAC that refuses to accept the truth (and like him, failed to support additional sanctions against Iran).

Rand Paul told Fox News after his bill failed to pass that he will not abandon the fight against US aid to the PA.

We must hope that he is true to his word.