Obama's Power and its Limitations 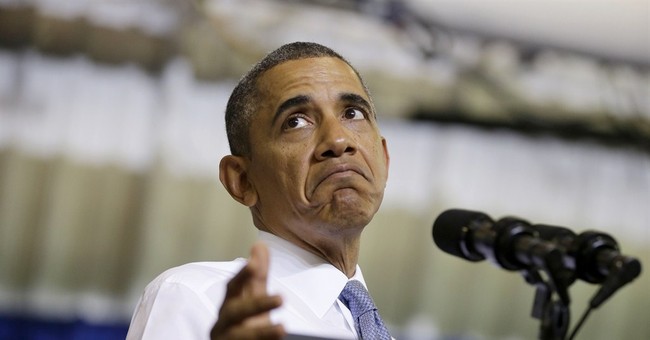 One of odder ones was the sight of hundreds of lobbyists from the American Israel Public Affairs Committee fanning out on Capitol Hill to lobby members of the House and Senate to support Obama's plan to launch what Secretary of State John Kerry called "unbelievably small" air strikes against empty regime controlled buildings in Syria.

AIPAC officials claimed they were doing this because the air strikes would help Israel.

But this claim was easily undone. Obama and Kerry insisted nothing the US would do would have any impact on the outcome of the Syrian civil war. This was supposed to be the strikes' selling point. But by launching worthless strikes, Obama was poised to wreck America's deterrent posture, transforming the world's superpower into an international joke.

Israel's deterrence relies in no small measure on its strategic alliance with the US.

Once the US is no longer feared, a key part of Israeli deterrence is removed.

Obama did not announce his intention to bomb empty buildings in Syria in order to impact the deterrent posture of either the US or Israel. He probably gave them little thought. The only one who stood to gain from those strikes - aside from Syrian President Bashar Assad who would earn bragging rights for standing down the US military - was Obama himself.

Obama wanted to launch the unbelievably small strikes to prove that he wasn't lying when he said that Syria would cross a red line if it used chemical weapons.

So if the strikes were going to harm the US and Israel, why did AIPAC dispatch its lobbyists to Capitol Hill to lobby in favor of them?

Because Obama made them.

Obama ordered AIPAC to go to Capitol Hill to lobby for the Syria strikes. He did so knowing that its involvement would weaken public support for AIPAC and Israel. Both would be widely perceived as pushing the US to send military forces into harm's way to defend Israel.

Then, with hundreds of AIPAC lobbyist racing from one Congressional office to the next, Obama left them in a lurch. He announced he was cutting a deal with Russia and had decided not to attack Syria after all.

What did AIPAC get for its self-defeating efforts on Obama's behalf?

Obama is now courting Iranian President Hassan Rouhani in the hopes of making a deal that Iran will use as cover for completing its nuclear weapons program. Such a deal may well involve ending sanctions on Iran's oil exports and its central bank - sanctions that AIPAC expended years of effort getting Congress to pass.

And that's not all. Monday, as Obama meets with Prime Minister Binyamin Netanyahu at the UN General Assembly in New York, Vice President Joe Biden will become the highest ranking administration official to date to address the J Street conference.

J Street was formed in order to weaken AIPAC, and force it to the left. Sending Biden to headline at the J Street conference is an act of aggression against AIPAC. It also signals that Obama remains committed to strengthening the anti-Israel voices at the margins of the American Jewish community at the expense of the pro- Israel majority.

The question is why is AIPAC cooperating with Obama as he abuses it? Why didn't they just say no?

AIPAC is not strong enough to stand up to the president of the United States, particularly one as hostile as Obama.

Not only would it have suffered direct retaliation for its refusal, Obama would have also punished Israel for its friend's recalcitrance.

In a recent interview with The Times of Israel, Eitan Haber, late prime minister Yitzhak Rabin's closest aide, made the case that Israel is powerless in the face of White House pressure. Haber claimed that only when a person becomes prime minister does he understand "to what extent the State of Israel is dependent on America. For absolutely everything... we are dependent on America."

Haber noted that the US can collapse every aspect of Israel. From this he concluded that no Israeli leader can stand up to Washington.

Haber recalled a menacing conversation Rabin had with then-US secretary of state James Baker during which Baker became angry at Rabin.

"America is right even when it is wrong," Baker admonished the Israeli leader.

Haber warned that Israel cannot stand up to the US even when the US is behaving in a manner that endangers Israel. "It's possible that they don't understand the region and that they are naïve and stupid," he said, "But they are America."

Haber was right that that the White House can destroy Israel's economy, defenses and diplomatic position any time it wishes. In the past administration threats of economic sanctions or delays in sending spare parts for weapons platforms have been sufficient to make Israeli leaders fall into line.

For the past five and a half years Obama has dangled US diplomatic support at the UN Security Council over Israel's head like the Sword of Damocles.

Obama forced Netanyahu to make concession after concession to secure his veto of the PLO's request that the UN Security Council accept "Palestine" as a member state two years ago. Netanyahu's sudden support for Palestinian statehood and his 10- month long freeze on Jewish property rights in Judea and Samaria were the most public concessions he was forced to cough up.

The timing of the EU announcement that it was barring EU entities from forging ties with Israelis that operate beyond the 1949 armistice lines was revealing in this context. The EU announced its economic sanctions the day Kerry announced the start of negotiations between Israel and the PLO. The message to Israel was absolutely clear: Do what we order you to or you will face economic sanctions far more damaging.

Obama's appointment of Samantha Power to serve as US ambassador to the UN was another signal of ill intent. Power became the object of fear and fury for Israel supporters after YouTube videos of a 2002 interview she gave went viral during the 2008 elections. In that interview Power called for the US to send "a mammoth protection force" to Israel to protect the Palestinians from "genocide" that Israel would commit. That is, she called for the US to go to war against Israel to protect the Palestinians from a nonexistent threat maliciously attributed to the only human rights-respecting state in the Middle East.

And just after his reelection, Obama sent Power to the epicenter of international blood libels and attempts to outlaw the Jewish state.

Obama's deal with Russia President Vladimir Putin was also a signal of aggression, if not an act of aggression in and of itself. The ink had barely dried on their unenforceable agreement that leaves Iran's Arab client in power, when Putin turned his guns on Israel. As Putin put it, Syria only developed its chemical arsenal "as an alternative to the nuclear weapons of Israel."

The Obama administration itself has a track record in putting Israel's presumptive nuclear arsenal on the international diplomatic chopping block. In 2010 Netanyahu was compelled to cancel his participation in Obama's nuclear weapons conference when he learned that Egypt and Turkey intended to use Obama's conference to demand that Israel sign the Nuclear Non- Proliferation Treaty.

Obama's behavior demonstrates his bad intentions. So Israelis and our American supporters need to ask whether Haber is right. Is Israel powerless in the face of a hostile US administration?

Let's reconsider Obama's decision to turn to AIPAC for support on Syria.

Why did he do that? Why did he turn to an organization he wishes to harm and order it to go to the mattresses for him?

Obama turned to AIPAC primarily because AIPAC could help him. AIPAC hold sway on Capitol Hill.

Where does that power come from? Does AIPAC wield influence because it frightens members into submission?

AIPAC is powerful because it serves as a mouthpiece for the overwhelming majority of Americans. The American people support Israel. If something will help Israel, then most Americans will support it. Obama wanted Congressional support. He couldn't win it on the merits of his feckless plan. So he sent in AIPAC to pretend that his strikes would benefit Israel.

Obama's demand that AIPAC help him is reality's response to Haber's protestations of Israeli powerlessness.

Israel's alliance with the US is built on the American public's support for Israel. And although Obama himself doesn't need to face American voters again, his Democratic colleagues do. Moreover, even lame duck presidents cannot veer too far away from the national consensus.

It is because of this consensus that Obama has to send signals to Israel - like the EU sanctions, and Power's appointment to the UN - rather than openly part ways with Jerusalem.

Obama is powerful. And he threatens Israel. But Israel is not as powerless as Haber believes. Israel can make its case to the American public.

And assuming the American people support Israel's case, Obama's freedom of action can be constrained.

For instance, on the Palestinian issue, Haber said Israel has to accept whatever Obama says. But that isn't true. Netanyahu can set out the international legal basis for Israeli sovereignty over Judea and Samaria and explain why Israel's rights are stronger than the Palestinians'.

The government can expose the fact that the demographic doomsday scenario that forms the basis of support for the two-state formula is grounded on falsified data concocted by the PLO.

Demography, like international law, is actually one of Israel's strategic assets.

Then there is Iran.

Were Netanyahu to defy Obama and order the IDF to attack Iran's nuclear installations, he would be pushing the boundaries of the US political consensus less than Menachem Begin did when he ordered the air force to destroy Iraq's nuclear reactor in 1981. He would also be pushing the US consensus less than Rabin did when he embraced Yasser Arafat in 1993.

No, Israel cannot say no to everything that Obama wishes to do in the Middle East.

And yes, it needs to make concessions where it can to placate the White House. AIPAC's decision to take a bullet for Obama on Syria may have been the better part of wisdom.

Israel has three-and-a-half more years with Obama. They won't be easy. And there is no telling who will succeed him. But this needn't be a catastrophe. Our cards are limited. But we have cards. And if we play them wisely, we will be fine.