Is Disney’s $15 Minimum Wage Hike a Help or a Hoax?

Carl Jackson
|
Posted: Dec 18, 2018 12:01 AM
Share   Tweet
The opinions expressed by columnists are their own and do not necessarily represent the views of Townhall.com. 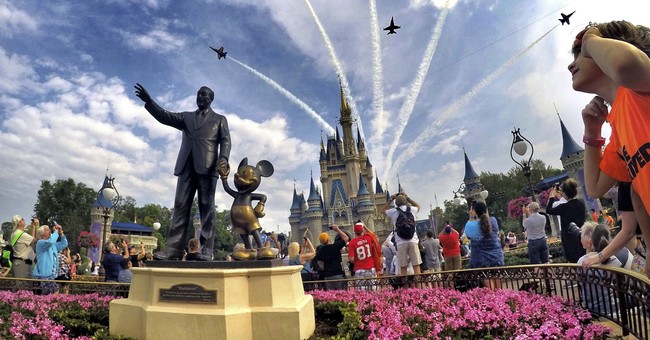 Did you know that the average family income for a minimum-wage worker is over $50K a year? How about that the vast majority of minimum wage workers are second, third and fourth earners in their families and not the primary earners as leftists often claim? In other words, a spouse or child is simply supplementing the income of the primary earner in most cases. Furthermore, did you know that two-thirds of minimum wage jobs are occupied by workers between 16 and 24 years of age who are first time inexperienced and unskilled labor? Additionally, has anyone ever told you that workers who begin a job at minimum wage will normally see a pay increase within their first 90 days to a year of employment?

Minimum wage has always been the starting line not the finish tape of our workforce. The aforementioned information is important to know before you read on.

Disney recently agreed to arbitrarily raise their starting minimum wage to $15 per hour for their employees. This may have appeased social justice warriors and their union members, but long term, this is a larger win for the big mouse than it is for their employee’s, despite the hype. Don’t get me wrong. Disney has every right to increase their minimum wage as a private employer, but should they?

Ultimately, someone is going to have to pay for Disney’s hourly wage hike to their workers. The question is, who? Well, it will be park-goers, other local businesses and Disney’s hourly workers themselves that will be hurt by the new contract that was approved in September of this year.

As reported by Tampabay.com, in a column titled “Disney workers approve new contract raising minimum wage,” Matt Hollis, the leader of six coalition unions, told the workers after the vote was tallied that “we got a fair deal.” Unfortunately, like many union leaders, he’s wrong. They got a raw deal.

Disney World is the largest “single-site” employer in the entire U.S. with approximately 70,000 employees. The new wage hike covers more than half of those workers. Including, costume characters, bus drivers, launderers, retail workers, monorail drivers, custodians, housekeepers, servers, cooks, florists, makeup artists and lifeguards. However, after speaking with some of their “cast members,” I found out that the devil is in the details.

First, workers themselves who have been loyal to Disney for years will be hurt by the new contract. Although wages will be raised significantly over the next three years, some employees have already seen their hours and overtime cut drastically. According to the workers I spoke with, Disney prefers part-time help to avoid paying out so many benefits. Prior to the approval of the new contract, the workers I interviewed worked up to 50-60 hours per week in order to earn a decent middle-class living for their families. Now, their hours have been reduced to 32 hours to make room for their colleagues and new part-time hires that will receive as much pay as some of their veterans.

Talk about social injustice! Losing 18 hours of work per week, despite earning more hourly, isn’t exactly what I’d call a pay raise! It’s a pay cut in many cases and a win for Disney.

Secondly, imagine all of the ma’ and pop shops and other amusement parks that’ll be hurt by Disney’s new starting minimum wage hike. For instance, Universal Studios and Sea World Orlando, which are non-unionized parks, have increased their starting minimum wage for their employees without cutting hours. Therefore, it’s going to be harder for them to keep their employees around, despite the fact these businesses will be spending just as much, if not more to pay them a fair hourly wage. I can hear some of you now, Carl, so what! That’s how capitalism works!  And you’d be partially right.

When you combine a great idea, product or service with a felt need and competition in the marketplace, you create better living wages for everyone. However, an arbitrary minimum wage dictated by social justice warriors rather than the marketplace itself, can have an adverse effect on employees.

Due to Florida’s great weather and its parks, Orlando attracts more tourists than any other destination site in the United States. So, you can imagine how competitive the search for tourism workers are here. If tourism workers quit their current employer to seek an opportunity at Disney for higher pay, only to find the pay isn’t what they’d hoped, not only does their prior employer lose their worker, but Disney will become even more of a local monopoly than they already are.

Why is this dangerous? Because Disney executives will have no incentive to keep their prices affordable for average park-goers, and other local businesses will not have the capability or incentive to compete. Ultimately, Orlando will have fewer jobs available for tourism workers, and all related industries will pay the price for it.

Lastly, customers will be hurt by the minimum wage hike. If you’ve never been to Disney World, there’s nothing like it. Everything from their parks, to their resorts, down to their employees, make you feel amazing! I wish everyone could afford to experience it. However, their prices have skyrocketed to a point that the average Joe can no longer afford to visit their parks without overspending or going in to debt. I don’t believe that’s what Walt Disney had in mind. Higher wages will all but guarantee fewer consumers will be able to experience Disney’s magic.