Trump Is Still Winning on the Economy

Cal Thomas
|
Posted: Dec 08, 2020 12:01 AM
Share   Tweet
The opinions expressed by columnists are their own and do not necessarily represent the views of Townhall.com. 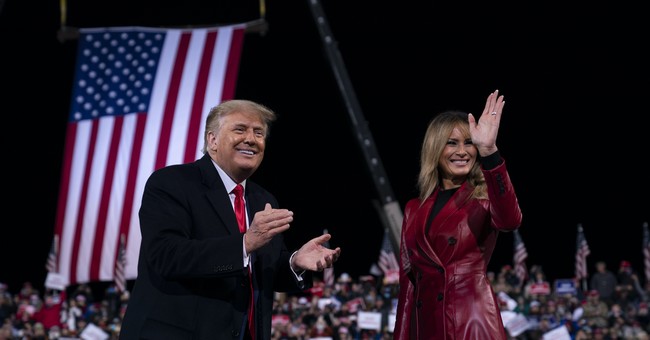 Some people can't handle success. The latest jobs report shows that despite the pandemic President Trump's policies of lower taxes and reducing regulations continue to work. Raising taxes and imposing regulations, as Joe Biden has pledged to do, has historically had the opposite effect, but there are people who continue to deny the history, believe lies, and appear ignorant of sound economic theory.

Yes, some businesses are struggling, or have closed, thanks to arbitrary orders from politicians, some of whom ignore their own directives. Employers added 245,000 jobs in November, down from 638,000 jobs the previous month. Overall, future signs remain positive and additions are better than subtractions.

The November jobs and economic numbers were released last Friday. According to a tweet by the Council of Economic Advisers (CEA), a U.S. agency within the Executive Office of the President, which advises the president of the United States on economic policy, "Despite newly imposed lockdowns by States and local governments, the unemployment rate has dropped by 8.0 percentage points since April. As of November, there were 4 million MORE Americans with a job than what the CBO in July estimated would occur at years-end."

CEA also reported, "The construction industry has recovered 74.2 percent of all pandemic job losses as of November. Nearly two-thirds of all job gains over the past seven months occurred in relatively low-wage sectors vulnerable to shutdowns, including retail, leisure & hospitality, and education and health services."

That record alone should have ensured Donald Trump's re-election, but combined efforts by Democrats and their media allies refused for the most part to report on these and other successes. On the rare occasions when they did, little or no credit was given to Trump and his administration. Instead, the media featured Democratic congressional leaders downplaying the results, or crediting Barack Obama.

This is beyond unfair. It is the deliberate manipulation of truth to benefit a party and politicians preferred by the media and establishment Democrats and, sad to say, establishment Republicans.

It does not take a prophet to accurately predict what Democrats and the media will say after presumptive President-elect Biden takes office, assuming all challenges to the November 3 election are unsuccessful. Especially if there is a downturn in the economic and jobs numbers in a new administration, the media and Democrats will blame Trump.

All anyone needs is a rudimentary recall of history. When taxes have been cut, going back to those proposed by President John F. Kennedy and extending through the Ronald Reagan and Donald Trump administrations, the economy soared. No one doubts what the economy would have looked like had there not been a pandemic. If Congress would cut unnecessary spending and reform entitlement programs, which is unlikely, the economy and the jobs that go with it would likely soar as never before, reducing, or even eliminating, the $27 trillion debt.

During the 2016 campaign, candidate Donald Trump predicted people would get tired of winning. His policies kept the economy going and he received more than 74 million votes in the election. If Biden succeeds in raising taxes and re-imposing unnecessary regulations, while radically increasing spending on dubious programs to combat "climate change," Americans may have to get used to losing again.