The Final Speech Trump Should Make

Cal Thomas
|
Posted: Nov 03, 2016 12:00 AM
Share   Tweet
The opinions expressed by columnists are their own and do not necessarily represent the views of Townhall.com. 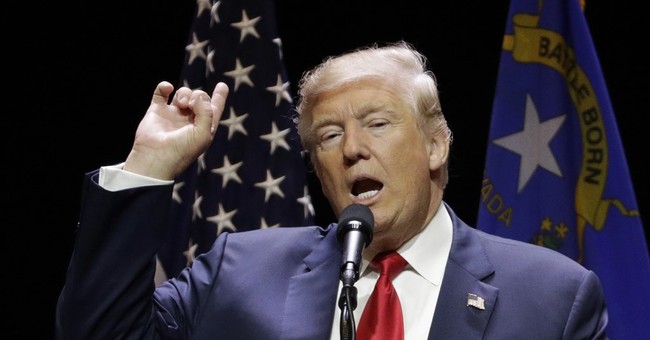 If Donald Trump wants to win this election and thwart the attempt by the corrupt Clintons to acquire the White House again, he must close the deal with persuadable voters in a nationally televised address.

My fellow Americans, running for president of this country I love and that has been so good to me is the greatest privilege I have ever known. Only being elected president would be a higher honor.

I know the concerns many of you have about me. I am far from perfect and have made mistakes, but I have learned from those mistakes and I promise you a presidency that will make you proud.

I chose the slogan "Make America Great Again" because I know it is possible. It is less up to me than it is up to you. That was Ronald Reagan's great gift. He would have been the first to say it was the American people who make this country great.

If you give me the honor of serving as your president, I promise you that Mike Pence and I will chart a new course for this nation. We will rebuild our military so that nations and terrorists will be reluctant to challenge us. We will care for our veterans so that not one of them has to die while waiting in line for treatment. We will construct a new health care system, replacing Obamacare and the skyrocketing premiums it has spawned, and we will focus on finding cures for diseases like Alzheimer's that cause so much pain and financial hardship to victims and their families. Cures will drive down the cost of care.

Immigration will again be controlled and our laws enforced.

By cutting taxes for individuals and corporations -- like John Kennedy and Ronald Reagan did -- companies and start-ups will create millions of jobs for a 21st-century economy, providing more tax revenue for the government. My administration will reduce waste and fraud, returning the government to its constitutional boundaries. We will cut the size and cost of government by making every program and agency justify its existence and eliminate those that don't work. We will reform entitlements, protecting those now benefitting from them and strengthening them for future retirees.

Federal judges I nominate will decide cases based on what the Constitution says, not on their personal preferences.

In foreign policy, I will work with Democrats and Republicans to decide where our interests lie. In places we should not be, we will ask other nations to defend themselves, especially those with the resources to do so. When America enters a war our goal will be victory, and those nations that ask for our help should be expected to pay for at least part of the cost.

We will liberate poor and minority children from failing public schools, giving them the choice of a better public, charter or private school. We will restore law and order to cities like Chicago, which has become a shooting gallery, by removing gang members from the streets and placing them in rehabilitation programs run by organizations with a track record for helping people turn their lives around. Those here illegally will be deported.

I will ask the hundreds of thousands of churches and other religious institutions to "adopt" people now on public assistance, equipping them with everything from education, to childcare and especially optimism and motivation so that they can find jobs and become independent of government. This is a calling churches already have. We will help them fulfill it. Mike Pence will be in charge of making it happen.

My fellow Americans, Ronald Reagan always said America's best days are ahead. I believe that, too. If you give us the privilege of serving as your president and vice president, we pledge our best efforts to follow Reagan's example. And it is you, more than us, who will make America great again. May we have the honor of your vote Nov. 8? Good night, and may God make America worthy of His blessing again.