Cal Thomas
|
Posted: Sep 15, 2016 12:01 AM
Share   Tweet
The opinions expressed by columnists are their own and do not necessarily represent the views of Townhall.com. 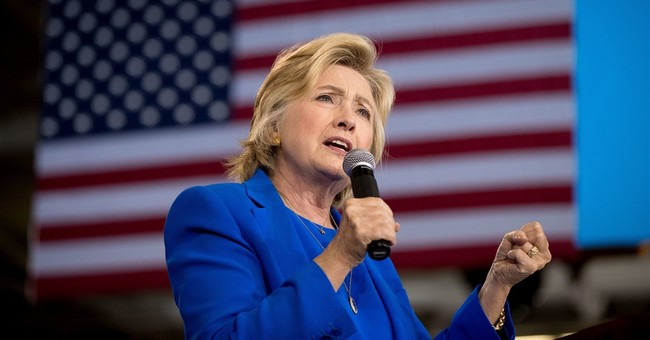 Congenital is defined as "having by nature a specified character."

Following Hillary Clinton's health scare Sunday in New York, we may have reached the conclusion author Mary McCarthy did when speaking of playwright Lillian Hellman: "Every word [Hellman] writes is a lie, including 'and' and 'the'."

A person's character is a clue to the entire person and both Clintons have displayed over many years severe character deficiencies. Abraham Lincoln said, "Nearly all men can stand adversity, but if you want to test a man's character, give him power."

Hillary Clinton has had power as first lady, U.S. senator and secretary of state, now she wants to achieve the ultimate in power, the presidency of the United States. Along this road we have seen her record and it is a trail of cover-ups, misstatements, dissemblings, half-truths and outright lies. It is increasingly difficult to give her the benefit of the doubt on anything because doubt would imply there might be some reason to believe that at least some of the things she says are true.

The perception is always that she is hiding something, which, if discovered, might harm her chances of winning the White House. But, from the inconsequential to the substantive, Hillary Clinton is about as transparent as lead.

Her weak-kneed near collapse is just the latest example. Diagnosed last Friday with pneumonia, her campaign blamed her recent coughing fits on seasonal allergies. When a video shot by a bystander at the 9-11 memorial service showed her supported by Secret Service agents as she stumbled and was helped into a van, she disappeared for 90 minutes with no press allowed to follow her.

Most people would regard such an incident as worthy of a trip to the hospital, possibly the emergency room, but as The New York Post reported, Hillary's aides took her to daughter Chelsea's apartment instead because they wanted to "keep the details of her medical treatment under wraps."

Transparency is the key to credibility, but in Hillary Clinton's case she and her handlers want us to believe the facade.

The campaign says it will release more medical records later in the week, but who believes these will tell the entire story? Maybe the records will be like those emails, which she claimed at various times to have released. She said she released all of them. This was not the truth.

Fowler told Politico, "Now is the time for all good political leaders to come to the aid of their party," adding, "the plan should be developed by 6 o'clock this afternoon."

The hour for such a decision may be long past six o'clock. For the Democrats, for Hillary Clinton and for the coming election less than 60 days away, it may be approaching midnight.