Needed: A Declaration of War

Cal Thomas
|
Posted: Jun 14, 2016 12:01 AM
Share   Tweet
The opinions expressed by columnists are their own and do not necessarily represent the views of Townhall.com. 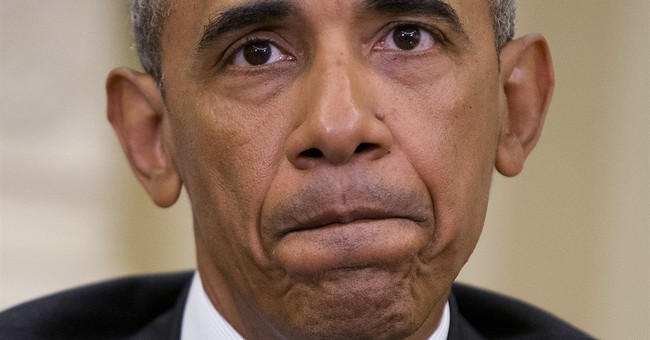 Credit President Obama for finally using the words he has desperately tried to avoid during his presidency. He correctly called the mass shooting in an Orlando gay nightclub Sunday morning, which killed 49 and injured 53, "an act of terror." It was, writes The New York Times, the "deadliest attack on a gay target in the nation's history."

Discredit to the president for avoiding linking the attack to ISIS and Islamic terrorism, even though the shooter, Omar Mateen, reportedly called 911 during the rampage and "pledged loyalty to the Islamic State." Jihadists everywhere quickly celebrated the carnage on the internet and, reports israelnationalnews.com, "...the al-Amaq agency -- which functions as ISIS's propaganda and media wing -- claimed that 'the attack ... was carried out by an Islamic State fighter.'"

The president used the tragedy to make another pitch for stronger gun laws. Does he believe that someone who claims to be on a mission from Allah would not be able to obtain guns and explosives illegally?

Mateen had been on the Federal Bureau of Investigation's radar in 2013 and 2014, but reports The Daily Beast, the FBI "subsequently closed the case when it produced nothing that appeared to warrant further investigation." NBC News learned that Mateen traveled twice to Saudi Arabia in 2011 and 2012 "to perform a pilgrimage to Mecca," according to a spokesman for Saudi Arabia's Ministry of the Interior. Once again, we are reactive rather than proactive.

The pattern following these terrorist attacks is now familiar. First comes extreme caution in which we say very little and refuse even to speculate about what seems obvious, followed, after the fact, as in the Fort Hood shooting, which was dubbed "workplace violence," by an attempt to quickly change the subject. Next comes the obligatory news conference in which a quickly produced imam or "expert," speaking for the Muslim community, is trotted out to say that the latest incident has nothing to do with Islam, which is a peaceful religion, and that we should all embrace unity.

Omar Mateen's father, Seddique Mateen, initially claimed there was no religious motivation behind the killings, but The Washington Post reported the father "is an Afghan man who holds strong political views, including support for the Afghan Taliban."

Muhammad Musri's mosque was even used for a fundraiser that collected $55,000 for Hamas. There is also a 2011 video of Musri in which he blames the United States for Sept. 11.

People like Omar Mateen are not so much "lone wolves" as "known wolves." But before law enforcement can legally act, it's often too late.

In wartime, certain liberties have been suspended in order to protect the country. This may be one of those times. Or should we wait until our enemies obtain a weapon of mass destruction?

Congress should declare war on all terrorist groups. Websites that promote ideologies that encourage terrorist acts should be shut down. No more mosques should be built in the U.S. until we gain an upper hand against radical Islamists. It does no good to say most Muslims are peaceful if you have no mechanism in place to act against or even identify those who are not.

On "American Idol," Randy Jackson would often say of a contestant that he or she was "in it to win it."

We don't appear to be in it, but our enemies are.