Where are They Now?

Cal Thomas
|
Posted: Apr 12, 2016 12:01 AM
Share   Tweet
The opinions expressed by columnists are their own and do not necessarily represent the views of Townhall.com. 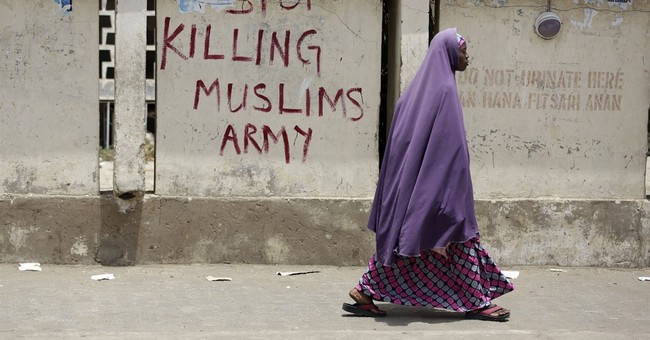 It's called Frontex and, according to its website, the agency "promotes, coordinates and develops European border management in line with the (European Union) fundamental rights charter applying the concept of Integrated Border Management."

Except that it isn't.

As reported by the UK Daily Mail, "Mass immigration is allowing terrorists to sneak into the EU." In a devastating report, the agency hired by the EU to keep member countries safe from jihadists has admitted what should have been obvious to anyone paying attention and taking seriously their threats.

While the agency says 1.82 million people made illegal border crossings last year -- a six-fold increase over 2014 -- that's only the number they were able to count. Frontex said it has no idea how many actual illegal crossings there have been. Furthermore it has been unable to trace their movements since they arrived and has no way of tracking them.

The Mail says officials warned that a "staggering number of European citizens had become jihadists and were taking advantage of lax border controls."

Since ISIS announced its intention to use the migrant flow to smuggle terrorists into Europe, why is it a surprise that they have kept their word?

What is encouraging this invasion is the reluctance of Western governments to adopt policies that might label them "Islamophobes." In far too many cases those concerns are outweighing their primary responsibility to protect citizens and borders. One example, which may not relate directly to the terrorist threat, but exposes the stupidity that increases the likelihood of more attacks, comes, again, from the Daily Mail, which reports, "EU judges ruled that foreign crime suspects cannot be deported automatically if they risk being imprisoned in degrading jail conditions abroad."

Does that mean judges are OK with suspects committing crimes in the EU while waiting for prison upgrades in their countries of origin?

Not that more information is needed about ISIS, al-Qaida and organizations like the Council on American-Islamic Relations CAIR and the Muslim Brotherhood, which some believe are little more than Islamic front groups, but in the event you might suffer from information deprivation, consider a sobering speech given at Hillsdale College in February by Andrew C. McCarthy, a former U.S. attorney who led the terrorism prosecution against Sheik Omar Abdel Rahman and 11 others in connection with the 1993 World Trade Center bombing.

After some initial reluctance to take Rahman's announced intentions seriously, McCarthy concluded he "was not lying about Islam," adding, "When he said the scriptures command that Muslims strike terror into the hearts of Islam's enemies, the scriptures backed him up."

To those who continue to promote the false notion that Islam is a "religion of peace," McCarthy responds: "this is how we fall into the trap of allowing the Muslim Brotherhood, the world's most influential Islamic supremacist organization, to infiltrate policy-making organs of the U.S. government, not to mention our schools, our prisons, and other institutions."

Western liberals like to make fun of people they claim are "climate deniers" when it comes to "global warming." They are guilty of denying the intentions of Islamists. As McCarthy warned his Hillsdale audience, "stubbornly unwilling to deal with the reality of Islam, our leaders have constructed an Islam of their very own."

This is why the infiltration is so effective in Europe and increasingly in the U.S. It is why, as The Daily Caller reports, "The United States issues twice as many green cards to migrants from Muslim-majority countries than from Europe, adding to a Middle Eastern migrant population in the country that is one of the fastest growing demographics."

There is even an Islamic University of Minnesota, run by a man who, according to the Investigative Project on Terrorism, "used a recent sermon to invoke a Hadith commonly espoused by Muslim terrorists to kill Jews for causing 'corruption in the land.'"

Still, we let them in and in too many cases lose track of where they are and what they are doing to our detriment.