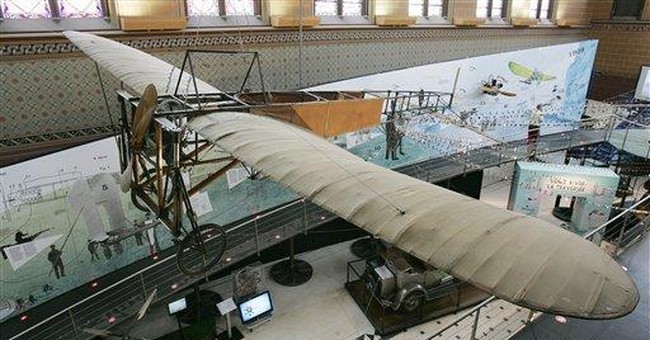 I was not surprised to see historian David McCullough's latest book rocket to the top position on The New York Times Best Sellers list.

Not only is "The Wright Brothers" beautifully written in McCullough's familiar narrative style, it reminds Americans of what we once honored and promoted: vision, initiative, talent, genius, entrepreneurship, faith, even clean living.

Orville and Wilbur Wright took many personal and financial risks. They paid for their experiments with a "flying machine" out of the small profits from their bicycle shop in Dayton, Ohio. Incredibly, after the first flight at Kitty Hawk, N.C., in 1903, which lasted just 12 seconds, and subsequent longer flights in the next two years -- many of which were photographed -- skeptical newspapers and especially the U.S. government would not believe that humans could fly. Previous attempts had failed, some spectacularly. The assertion that "If God had meant Man to fly, He would have given him wings" was deeply embedded.

The Wrights repeatedly tried to interest the U.S. government in their invention, but each time they were rejected. Several appeals to the Board of Ordnance and Fortification were turned down. In one letter the Wrights said they "(did not want) to take this invention abroad unless we find it necessary to do so."

They found it necessary, prompting the French-born American civil engineer, Octave Chanute, to say about the board, "Those fellows are a bunch of a---s."

When it comes to government bureaucracy, little has changed.

The French were eager to believe men could fly, despite numerous failed tests by some of their own, which included some of the most bizarre contraptions ever built. These were more suitable for comic-book fiction than the reality of aerodynamics.

The French government paid for Wilbur Wright to come to Paris, where he was feted and encouraged to show what he and his brother had invented. It was only after their "triumph at LeMans" in 1908, which awakened the French and subsequently American media to what these men had achieved, that the U.S. government came to believe people could fly and the War Department agreed to pay $25,000 for one "heavier-than-air flying machine."

Wilbur and Orville initially studied birds, observing how they flew, turned, soared and landed. These principles of aerodynamics were vital to their initial experiments and subsequent successes. More than anything else it was their persistence and belief in what others thought impossible that carried them through setbacks and financial challenges. Offered the possibility of a $10,000 investment by Andrew Carnegie, the brothers resisted the temptation, preferring to maintain control of their invention.

The values exemplified by the Wright brothers, their preacher father and their sister, were once reflected in many levels of American culture. In schools, the McGuffey Readers reinforced those values in children. Ministers preached them from pulpits and the media mostly promoted them in their journalism and even films, with some notable exceptions.

If contemporary hostility to those values had been present in the early 20th century; if government taxation, regulation and envy of the successful had been the norm, then the Wright brothers' dream of flying might never have gotten off the ground.

On the book jacket of McCullough's biography, the publisher (Simon and Schuster) writes: "Far more than a couple of Dayton bicycle mechanics who happened to hit on success, the Wright brothers were men of exceptional ability, unyielding determination, and far-reaching intellectual interest and curiosity, much of which they attributed to their upbringing."

There you have the formula for improving any life. While not everyone is as gifted as these "magnificent men in their flying machines," and while no one can learn genius, all can learn about the fruits of determination, vision and persistence. Those values still work. Perhaps some of the presidential candidates might help us rediscover them.