Then What in Syria? 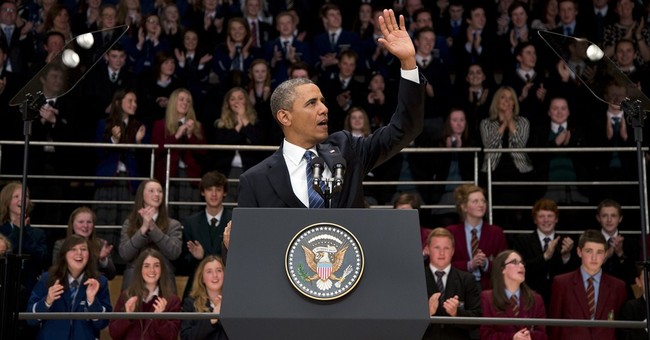 The Washington Post headlined an editorial: "No time for half-measures: Syria's rebels need a robust intervention from the Obama administration." The New York Times took a more realistic approach: "After Arming the Rebels, Then What? President Obama should be careful about being dragged into the brutal Syrian war."

I'm on the side of the Times.

Some promote U.S. involvement in Syria for humanitarian reasons. That might be sufficient if the outcome advanced humanitarian concerns, but exchanging one tyrant for another is not a long-term solution. One Syrian rebel group has reportedly pledged allegiance to Osama bin Laden's replacement, al-Qaida leader Sheik Ayman al-Zawahri. Deposing a mass murderer in favor of jihadists committed to "holy war" against America and the West is like choosing a firing squad over the guillotine.

The Washington Post reported the murder of a 14-year-old boy by Syrian rebels. The boy's crime? When he "was asked to bring one of his customers some coffee," the Post writes, "he reportedly refused, saying, 'Even if (Prophet) Mohammed comes back to life, I won't.'" A group of Islamist rebels took this as an insult to Islam. Are these the rebels President Obama's backing?

The United States has a bad track record in the Middle East. President Jimmy Carter helped topple the shah of Iran. Now the shah's replacements, in concert with Hezbollah, writes ABC News, "have been helping the Syrian regime of President Bashar Assad..." Iran's supreme leader Ayatollah Ali Khamenei recently called Israel a "cancerous tumor" and vowed Iran's support to any nation or group that attacks it. Iran is intent on acquiring nuclear weapons. The Independent newspaper in Britain reports that Iran has pledged to send 4,000 Iranian Revolutionary Guards to Syria to support President Assad.

In Egypt, Mohamed Morsi, the Muslim Brotherhood candidate, won the last election after the U.S. supported the ouster of Hosni Mubarak. The outcome in Libya, following U.S. support of rebels opposed to Moammar Gadhafi, is unlikely to be pleasant should that nation's draft constitution based on Sharia law be adopted.

The Obama administration reportedly is ready to consider a U.N. request to resettle some Syrian refugees in the United States. "...part of an international effort that could bring thousands of Syrians to American cities and towns," writes the Los Angeles Times. Can we be sure a number of them won't be jihadists?

For too long, American involvement in the Middle East has employed the wrong formula in the mistaken belief that we can change the thinking of radical Islamists. Many administrations have pressured Israel in the misguided and unjustified hope that this would produce a change in outlook and a reset in religious fanaticism. It hasn't. In fact, our "reach-out" efforts are seen as weakness in much of the Islamic world.

Arab and Muslim peoples have been at war with other nations and each other for centuries. The two major factions of Islam -- Sunni and Shia -- are in constant conflict over which one is Prophet Mohammed's legitimate heir. The "infidel" West can't help settle any of this and is more likely to unite the warring factions against us, as it has in the past.

Add to this a scenario that resembles the Cold War. Russia is "all-in," supplying anti-ship cruise missiles to President Assad's regime. Moscow, according to the Wall Street Journal, has deployed at least a dozen warships to patrol waters near the Russian naval base in the Syrian city of Tartus. President Obama's token gesture of small arms and ammunition is the equivalent of dipping one's toe in the Mediterranean Sea and calling it swimming.

As in so many other instances, President Obama is, according to the Daily Telegraph, "leading from behind in Syria -- and can't see where he is going."

The president wants credit for withdrawing American forces from Iraq and Afghanistan, but with Syria he is involving the U.S. in another war that can't be "won," at least not in a way that will advance American interests.