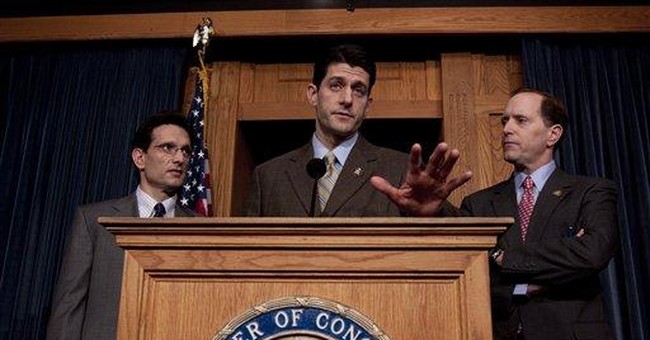 In 2008, "60 Minutes" visited Denmark to report on a survey of international happiness conducted by Leicester University in England that concluded Danes are among the happiest people on Earth. The reason? They have low expectations and thus, as Morley Safer noted, "are rarely disappointed."

This ought to be a Republican Party theme in the November and subsequent elections. If our expectations about politicians and government are lowered, we will then start expecting less from them and more from ourselves, then our prospects for happiness will likely be much improved.

Take spending. Clearly we can't go on like this. People should ask their grandparents if their parents told them, "We can't afford it" when they asked for certain things. In this generation, the question of whether we can afford something is rarely asked.

Our massive debt has produced an unease that America may be at greater risk from economic collapse than from terrorists. Excessive debt is terror by other means.

Brian Riedl of The Heritage Foundation (www.heritage.org) has performed a useful service by analyzing the 10-year budget baseline of the Congressional Budget Office (CBO), which puts the deficit at $6.2 trillion. Riedl says that's a phony figure because CBO is forced to make assumptions based on what Congress tells it. The true baseline deficit, says Riedl -- based on a continuation of current spending and tax policies -- amounts to $13 trillion over the next decade.

If ever there was a time when "we can't afford it" actually means something, this is that time.

-- Even as war spending phases out and the economy recovers, the projected budget deficit never drops below $1 trillion, and reaches nearly $2 trillion by 2020.

-- The national debt held by the public is set to surpass 100 percent of the Gross Domestic Product (GDP) by 2020.

-- By 2020, half of all income tax revenues will go toward paying interest on a $23 trillion national debt.

The entire analysis by Riedl may be found at http://www.heritage.org/Research/Reports/2010/08/New-CBO-Budget-Baseline-Shows-that-Soaring-Spending-Not-Falling-Revenues-Risks-Drowning-America.

Read it and weep for yourself and for future generations.

Some Republicans, like Rep. Paul Ryan of Wisconsin, are offering credible and thoughtful ways to get us out of this mess. Will the Republican leadership follow, or will it simply try to manage the big government liberal Democrats created, cutting only a little around the edges?

Lowering expectations of government and politicians is only half the equation. We must then raise expectations for ourselves. "You can do it" is more than a rousing assurance from a parent after the training wheels come off and we ride the two-wheeler for the first time, it's the ratification of the individual's power over the weakening power of the state.

Do we really need all we consume? After buying it, how much of it really satisfies? If we look to government to care for us, rather than looking to ourselves and to family, the time will come when government won't be able to, health care will be rationed and our lives will be deemed unworthy of continuing.

Thomas Jefferson said we had the right to pursue happiness. He didn't tell us where to find it. Lowering expectations of government and politicians and raising our own expectations is where happiness -- or at least contentment -- can be found.

How many other Republicans, besides Paul Ryan and too few of his colleagues, will tell us what we need to hear? For the first time in a very long time, the public may be ready for some strong medicine.