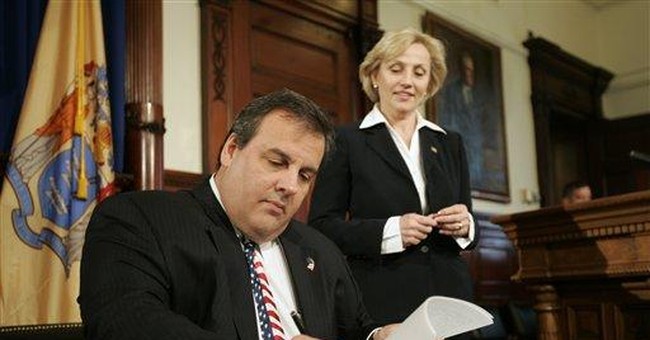 "What experience and history teach is this -- that people and governments never have learned anything from history, or acted on principles deduced from it." (Georg Wilhelm Friedrich Hegel, "The Philosophy of History," 1837)

Last week, the Newark Star-Ledger reported that New Jersey lost $70 billion in wealth over the past five years. The reason? Affluent people have moved to states with a lower tax rate or no income tax at all.

The findings are from a study conducted by the Center on Wealth and Philanthropy at Boston College, the first study on interstate wealth migration in the country. The report found that wealthy New Jersey residents apparently grew tired of the state treating their success as an ATM for politicians and so they moved to Florida, Pennsylvania and even New York, a state not known for low taxes, but its levies are not as high as New Jersey's.

The study found that wealth migration is a relatively new phenomenon. In the five years preceding 2004, researchers discovered an influx of $98 billion into the state. That would have been during a period when New Jersey was enjoying tax cuts after a run of four successive Republican governors. The Democrats who followed raised taxes, some substantially.

Dennis Bone, chairman of the New Jersey Chamber of Commerce, told the Newark Star-Ledger, "This study makes it crystal clear that New Jersey's tax policies are resulting in a significant decline in the state's wealth."

The problem in New Jersey and with the federal government under Democrats and some Republicans is that ideology has trumped history and common sense when it comes to taxes and spending. Politicians can see the results of lower taxes, which bring greater prosperity and higher revenue to federal and state governments because more people are working and earning money. But their liberal ideology is so frozen it cannot move from its desire to "tax the rich," even though overtaxing the rich drives the rich to other states. Unfortunately, there is no escaping the long arm of the federal government, which may be why the Obama administration wants to cut back on space travel.

What can be said about politicians who refuse to see the obvious and stick, not to principle (a principle would make them change their minds), but to a rigid ideology that is cult-like in its refusal to accept reality? If you tax more, you will get less because businesses won't hire and in extreme cases -- like New Jersey -- people will move to other states.

The problem for New Jersey and other states -- and Washington -- is that governments are run by politicians whose main focus is their re-election. In this pursuit they don't want to say "no" to anyone's request for an earmark, a project, a program, or an "entitlement." The result has been a growing addiction by too many people to government instead of reliance on self. As more become dependent on government, more vote to preserve the status quo. And rabid political opponents will set upon anyone who suggests a cut in spending.

Welfare reform should have taught a valuable lesson. There were claims that people would starve in the streets if their welfare checks were ended and recipients were forced to get jobs. They got jobs and no one starved.

Government must begin weaning people from government. If it won't, we the people must do it. All programs should be continually subject to reauthorization and justification. Social Security and Medicare should be means-tested with incentives for people not to sign-up for them. Families should take care of elderly parents, like they once did. Government should be a last resort, not a first resource.

Just as too many have been conditioned to turn to government, we must be reconditioned to turn away from government and embrace the higher virtue of liberty. We can't go on taxing and spending ourselves into financial oblivion. New Jersey proves there are limits. Does the Obama administration and a Democratic Congress understand? Will they learn from history?