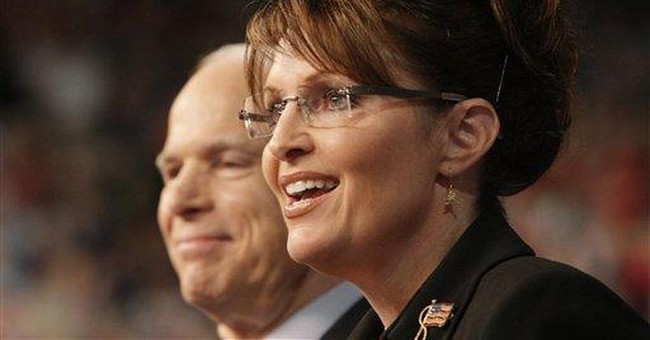 ST. PAUL, MINN. - We are such hypocrites. When it was announced that Alaska governor and GOP vice presidential candidate Sarah Palin's 17-year-old daughter, Bristol, was five months pregnant, the media pounced.

Did this damage Palin's preference for abstinence-only policies? Shouldn't she be staying home at this difficult time in her daughter's life? What about Palin's new baby, who has Down syndrome? Shouldn't he be getting much more of her time and attention? How can she be vice president and a good mother? Haven't critics forgotten that Palin has a husband to help?

Speaker Nancy Pelosi has five children. No one has asked her such questions.

One female journalist said to me it makes a mockery out of the Republican Party's family values platform. No it doesn't.

Speaking with some personal experience on these matters - our daughter experienced a premarital pregnancy and I have a brother with Down syndrome - I am astounded at the rush to judgment by so many in the media, a media that promotes what it then quickly decries. So who are the real hypocrites?

One can't turn on the TV in primetime without being exposed to all sorts of sex (except the marital variety). There is very little "safe sex" on TV. Actresses speak of their sexual exploits as if they were discussing the latest in designer shoes or where to have lunch. Erectile dysfunction commercials abound. The Internet offers free porn with a single "click." My grandmother, who thought it demonstrated poor breeding to say the words "toilet paper" in public, would be scandalized. Entertainment reporters hold up as role models young actresses having sex and babies out of wedlock, as if it is one of many equally valid choices.

Many in the media are now questioning whether Sarah Palin has allowed her career and a "lust for power" to interfere with her family responsibilities. This is laughable. These same people have promoted women who work 12-hour days and dump their preschool children in day care.

When Bill Clinton was exposed for his affairs, defenders said it was "only" sex and that everybody lies about sex and most probably cheat on their spouses. When Jesse Jackson was reported to have a "love child," no one clamored for his ordination papers to be revoked. And when John Edwards was outed by the National Enquirer about his own affair, the cover-up and his own alleged "love child," he suffered some ridicule and rejection, but there was talk in some media quarters that he might "rehabilitate" himself and run for office again.

When news breaks that the daughter of a Republican political figure is pregnant out of wedlock, the media quickly return to our Puritan roots and seek to hold certain people (usually conservatives) to a moral standard that culture has abandoned. Palin should have stayed home to devote more time to her children, they say. She is an unprincipled careerist who will sacrifice family in order to achieve success. And so on.

Rev. Billy Graham once observed that the "new morality," as it was once called, is nothing more than the old immorality with new wrapping. He was right. There is nothing "new" about immorality or morality. Styles may change, but standards don't, otherwise some elected officials would not still be going to jail for violating the law. If you think standards are relative, try this line on the cop who stops you for exceeding the speed limit. "Officer, you may think I was going 75 in a 25-mile zone, but speed is relative."

Abstinence is a standard that works 100 percent of the time for those who practice it. There are consequences for those who do not and Bristol Palin has joined a growing list of young women who have come to realize that too late. As to whether any of this should reflect poorly on Sarah Palin or her husband, I suspect most Americans will empathize with all concerned and say no.