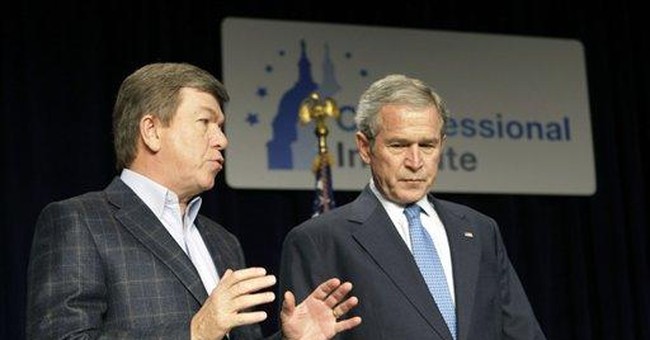 The aptly named Republican "retreat" last weekend at the ritzy Greenbrier resort in West Virginia should have included Democrats because Republicans are behaving just like them.

There was President Bush arguing for his "bipartisan stimulus package" and supporting government handouts with borrowed money. Republicans can always cut a bipartisan deal if they behave like Democrats.

House Republican Leader John Boehner implored his fellow Republicans to "sacrifice" by agreeing to a one-year moratorium on earmarks to "prove" that Republicans are the party that can fix Washington. Someone should have pointed out to Boehner that the word "fix" is also used to describe the neutering that occurs at a veterinarian's office to keep a pet from reproducing. The Republican Party is engaging in self-mutilation.

President Bush, according to The Wall Street Journal, chose to "use his State of the Union address to lay down his toughest anti-earmarking pledge to date tell Congress that he will veto any fiscal 2009 spending bill that doesn't cut earmarks in half from 2008 levels" and issue "a Presidential order informing executive departments that from now on they should refuse to fund earmarks that aren't explicitly mentioned in statutory language."

This would have been more credible and more effective had it occurred when Republicans controlled Congress. Too many Republicans continue to embrace the notion that more spending on pork barrel projects will keep them in office. They should have been disabused of that notion when they lost control of Congress in the 2006 election, largely because their collusion with President Bush on spending and expansion of government mimicked the Democrats. The Republican rank and file and Independent voters prefer their liberalism straight up rather than diluted by party leaders.

The best opportunity Republicans had at their retreat to prove they see the light on spending was to name the tireless anti-pork crusader Rep. Jeff Flake, Arizona Republican, to the powerful Appropriations Committee. This would have been the equivalent of placing a preacher at the entrance to a house of ill repute, or a member of the Woman's Christian Temperance Union on an alcohol beverage and control board. The analogies are apt because too many politicians are drunk on power and behave like harlots with other people's money.

Flake, who was passed over for the post, would be the conscience of the committee, which has been devoid of a moral compass no matter which party controls the House. He sends out news releases spotlighting the "Egregious Earmark of the Week." Last week's was $1.12 million for potato research, which he characterized as "a waste of money no matter how you spell it."

In a phone call from the retreat, Flake told me his colleagues rejected an earmark moratorium after hearing pleas from some members that earmarks were the only way they can get re-elected (whatever happened to ideas?). He said Republicans called on Democrats to act first and that by doing so they missed an opportunity to stand on principle and win political points. Flake predicted, "we'll get there" on earmark restraint, but not until after more Republicans are indicted and "an anti-earmark crusader like John McCain or Mitt Romney is nominated and elected president."

What Republicans need is a dose of Barack Obama, who recently praised Ronald Reagan to the consternation of leading Democrats. Obama correctly noted that "Ronald Reagan changed the trajectory of America in a way that Richard Nixon did not, and a way that Bill Clinton did not." That's because Reagan had core principles from which he rarely deviated.

Instead of standing in front of those silly signs they use to promote whatever it is they are talking about, Republicans should use backdrops that promote some of Reagan's greatest sayings. These include:

My personal favorite is: "Man is not free unless government is limited."

That last one should be tattooed on every Republican member of Congress. Have any of these core principles been proved wrong, outdated or unworkable? Did not these ideas promote economic growth and Republican electoral prosperity?

They did, so why aren't Republicans advancing them again, instead of retreating and trying to buy votes with "stimulus" packages and pork barrel projects?