Did Putin Wait Until Biden Became President to Invade Ukraine?

Byron York
|
Posted: May 25, 2022 12:01 AM
Share   Tweet
The opinions expressed by columnists are their own and do not necessarily represent the views of Townhall.com. 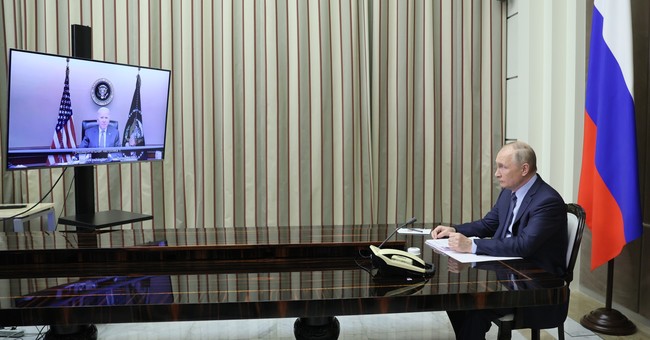 In the days after Russia attacked Ukraine, there was a lot of talk among Republicans that Vladimir Putin would not have invaded had Donald Trump still been president. Trump was so difficult to predict, so impulsive, so impetuous, the thinking went, that Putin would not have risked a massive U.S. response under Trump.

"The sheer unpredictability of Trump, his anger at being defied or disrespected, his willingness to take the occasional big risk (the Soleimani strike), all had to make Putin frightened or wary of him in a way that he simply isn't of Joe Biden," National Review editor Rich Lowry tweeted.

The anti-Trump crowd scoffed. Trump was Putin's stooge, they said. The Russian strongman didn't need to invade Ukraine because Trump would have given him everything he wanted without all the messiness of a big war. "Trump never once showed any anger, risk-taking or unpredictability with Putin," tweeted Rick Wilson, co-founder of the Resistance fundraising group The Lincoln Project. "He showed deference, adoration, admiration, obedience, and sought to wreck NATO, Putin's highest goals. Putin didn't need to buy the cow. The milk was free."

Now, though, the side skeptical that Putin would have acted had Trump been president has gotten some support from an unlikely source. Fiona Hill, the Russia expert, former senior National Security Council aide in the Trump White House and star witness against Trump in his first impeachment, appeared recently on a program sponsored by the Chicago Council on Global Affairs. Discussing the Ukraine war, Hill suggested that Putin waited to invade Ukraine until Biden became president, preferring Biden's "predictability" to Trump's volatility.

Hill was quite critical of Trump, saying he knew nothing about matters concerning Ukraine or international relations. When Trump met with Putin, she continued, Putin found himself having to explain things to Trump. If Putin were going to launch an invasion, Hill said, "he thought that somebody like Biden, who's a 'transatlanticist,' who knows all about NATO, who actually knows where Ukraine is, and actually knows something about the history, and is very steeped in international affairs, would be the right person to engage with, as opposed to somebody you've got to explain everything to all the time." In this view, Putin saw Biden as someone he could deal with as Russia seized territory from Ukraine. But not the erratic Trump. Who knew what he might do? "[Putin] wants to have predictability in the person that he's engaging with," said Hill.

Hill certainly made it sound as if Putin made the specific calculation that his brutal invasion of Ukraine would be more likely to succeed with Biden in the White House than with Trump. Of course, Hill is not the final authority on such matters. But her account lends credibility to those who argued that Putin would not have invaded Ukraine were Trump still in the White House.

Meanwhile, a lot of Americans are going to see ominous undertones in a new move under consideration by the Biden administration. On Monday, The Wall Street Journal ran a story headlined, "Pentagon Weighs Deploying Special Forces to Guard Kyiv Embassy." The paper reported that U.S. officials are considering sending elite troops "for the defense and security of the [American embassy in Kyiv], which lies within range of Russian missiles." The paper added that the presence of U.S. special forces "would mark an escalation from Mr. Biden's initial pledge that no American troops will be sent into the country."

Biden not only pledged that no American troops will be sent into Ukraine -- he pledged not to send the highest levels of other U.S. assistance to Ukraine, lest it draw the U.S. into the war. "The idea that we're going to send in offensive equipment and have planes and tanks and trains going in with American pilots and American crews -- just understand, don't kid yourself, no matter what y'all say, that's called World War III," Biden said in early March, when he refused to facilitate the transfer of fighter jets to Ukraine.

More recently, on May 3, during a visit to a Lockheed Martin facility in Alabama, where the company makes the Javelin anti-tank missiles the U.S. is sending by the thousands to Ukraine, Biden told workers that, "You're making it possible for the Ukrainian people to defend themselves without us having to risk getting in a third world war by sending in American soldiers fighting Russian soldiers."

And now there is a plan to send American soldiers into Ukraine, ostensibly just to protect the U.S. embassy, but also creating the risk that a Russian military action, intentionally or not, might hit Americans, drawing the U.S. further into the war. The Journal reports the special forces plan has not yet been presented to the president. But when it is, Biden -- and the United States -- will have a deeply consequential decision to make.

This content originally appeared on the Washington Examiner at washingtonexaminer.com/opinion/did-putin-wait-until-biden-became-president-to-invade-ukraine.