Can Trump Be Tried?

Byron York
|
Posted: Jan 26, 2021 12:01 AM
Share   Tweet
The opinions expressed by columnists are their own and do not necessarily represent the views of Townhall.com. 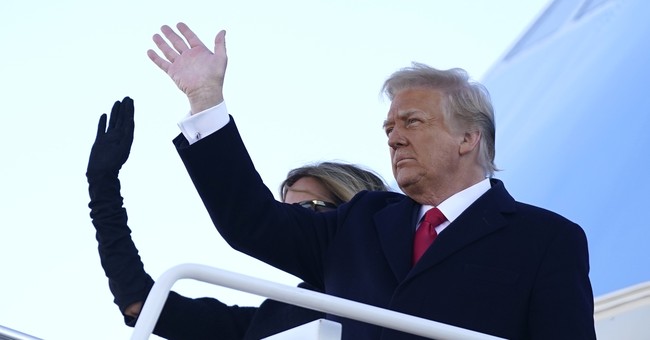 House Democratic impeachment managers have delivered to the Senate a single, hastily passed article of impeachment against former President Trump. A trial is set to begin on Feb. 9. It will be an event without precedent -- the first time in U.S. history that a former president will be tried in a court of impeachment.

Several Republicans are arguing that a trial would be unconstitutional, that a former president cannot be tried. After all, they say, impeachment is the Constitution's method for removing a president who has been found guilty of serious misconduct. But Trump can't be removed. He's already gone, having served out his term that ended on Jan. 20.

Democrats will argue that the Constitution does not specifically say you can't impeach a former official. They will argue that when Article II of the Constitution says, "The president, vice president and all civil officers of the United States, shall be removed from office on impeachment for, and conviction of, treason, bribery or other high crimes and misdemeanors," it does not specifically prohibit the targeting of a former president.

They will also argue that when the Constitution says the penalty for impeachment "shall not extend further than to removal from office, and disqualification to hold and enjoy any office of honor, trust or profit under the United States," that means that while removal is irrelevant in Trump's case, the Senate can still, by finding Trump guilty, bar him from ever being president again.

To support their position, Democrats will point to a single precedent, the case of a Cabinet official, Secretary of War William Belknap, who in 1876 was accused of financial corruption. Minutes before the House was scheduled to impeach him, Belknap resigned, claiming that Congress could not impeach a former official.

The House went ahead and impeached Belknap anyway, and the Senate then debated whether Belknap, as a former official, could be tried in a court of impeachment. They eventually decided that he could, although a significant minority of senators believed the trial was unconstitutional. Then, after a five-month trial, they failed to convict Belknap by a vote of 37-25. The reason Belknap was acquitted was because of those senators who felt the trial was unconstitutional. Without them, the Senate could not reach the Constitution's two-thirds standard for conviction.

So that is the precedent Democrats will claim allows them to try former President Trump. But the fact is, there is more precedent for Congress choosing not to try a former official.

The biggest is the case of President Richard Nixon, who resigned ahead of impeachment in 1974. Once Nixon was out of office, the House ended its impeachment proceedings.

And then there are judges, who make up most of the impeachments in U.S. history. "On numerous occasions, the target of an impeachment inquiry resigned before the House could take a vote," wrote Michigan State University law professor Brian Kalt in an extensive 2001 article on late impeachments. "In every one of those cases (except, of course, that of Belknap), the House opted not to proceed." Kalt's article quoted a 1992 book, "Crimes, Follies, and Misfortunes: The Federal Impeachment Trials," by author Eleanore Bushnell, that said, "More than 50 federal judges have resigned while under investigation or after their impeachment had been recommended to the House of Representatives, and further action was not pursued against them."

So what is stronger precedent, Republicans will ask: a single case -- Belknap -- or dozens of cases, including one president, in which Congress decided not to pursue impeachment or trial against a former official?

But what about the argument that the Constitution does not specifically prohibit the trial of a former president? For that to work, then Article II of the Constitution, which says "The president ... shall be removed from office on impeachment ..." must refer not just to the president in office at the time, but also to former presidents. To that point, Kalt quotes an argument from the Belknap trial in which one of Belknap's attorneys said, "The word 'president' appears 14 other times in Article II, and in every single case it is undisputed that it refers to the person serving as president, not to a former president." That is true, and it is a powerful argument that the "shall be removed" section also refers to the president in office.

There are a lot of lawyers in the Senate. When the Trump trial begins, they will undoubtedly argue these matters. Republicans hoping to stop the trial altogether will lose in the face of a Democratic majority. But theirs is a case that should be made, before the Senate goes ahead with an action unprecedented in all of American history.