In Washington, A Rare Relationship Without Pretense And B.S.

Byron York
|
Posted: Aug 29, 2018 12:01 AM
Share   Tweet
The opinions expressed by columnists are their own and do not necessarily represent the views of Townhall.com. 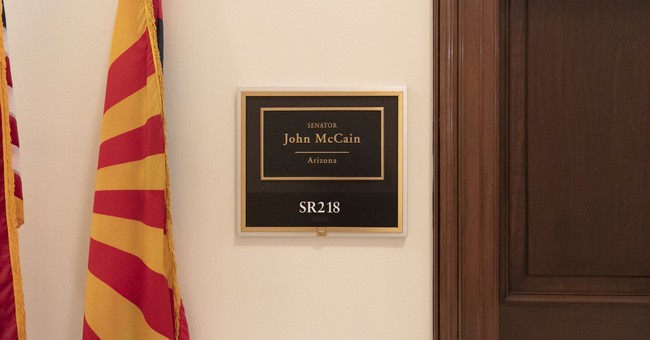 There are people in Washington who hate each other but who, for public consumption, pretend not to hate each other. What was almost refreshing about the relationship of Sen. John McCain and President Trump was that there was no such pretending.

A number of Trump's 2016 Republican primary rivals who serve in the U.S. Senate -- Marco Rubio, Lindsey Graham, Ted Cruz and Rand Paul -- said some pretty vicious things about Trump during the campaign, and of course, Trump said vicious things about them. Now, some of them have future political ambitions that would not be served by feuding with a president of their own party. Others are just trying to get things done and recognize the will of the voters. Whatever the reason, all have made their peace with Trump. Some are actually friendly with him.

The notable thing about McCain, who even before he fell ill was approaching the end of his Senate career and whose own runs for the White House were in the past, was that he never felt the need to even feign positive feelings for his party's leader.

In a way, the two men together, McCain and Trump, struck a blow for genuineness amid the phoniness of official Washington.

Their antipathy played out in a series of escalating attacks on each other in 2015, as Trump began to make waves in the Republican presidential primary.

It started when Trump announced his candidacy on June 16, 2015. He pounded on Mexico, accusing the country of taking American jobs and giving little in return. "When Mexico sends its people, they're not sending their best," Trump said. "They're sending people that have lots of problems, and they're bringing those problems with us. They're bringing drugs. They're bringing crime. They're rapists. And some, I assume, are good people."

That did not sit well with McCain, the longtime comprehensive immigration reform advocate and moving force behind the Senate's Gang of 8 immigration bill. During a June 30 town hall in Arizona, McCain was asked about Trump. "I don't pay much attention," McCain said, according to an account in the Arizona Republic. (Some of this column is based on the Republic's helpful timeline of the McCain-Trump relationship.) Later, McCain said he didn't think Trump's campaign would last and added, "I just disagree with his comments about the, quote, Mexicans."

The paper's headline was, "John McCain the latest to pummel the Donald." It wasn't much of a pummeling, but Trump no doubt took notice.

Trump scheduled a rally in Phoenix on July 11. Two days before, the Republic ran a story headlined, "Trump shunned by Arizona's GOP establishment ahead of Phoenix visit." McCain went on MSNBC to tell host Andrea Mitchell that he found Trump's rhetoric offensive.

"When he comes to Arizona, he will find that we Arizonans cherish our Hispanic heritage and influence," McCain said. "We cherish the music, the culture, the food."

While McCain stayed away, Trump's rally was big. And of course, Trump fired back at McCain. "We have incompetent politicians, not only the president," Trump said. "I mean, right here, in your own state, you have John McCain." Trump later told reporters that McCain was "very weak on immigration" and could be beaten for re-election "if the right person" ran against him.

Of course, McCain struck back. On July 16, talking to The New Yorker, McCain said, "This performance with our friend out in Phoenix is very hurtful to me, because what he did was he fired up the crazies."

That same day, an enraged Trump, via Twitter, demanded that McCain apologize to the "amazing Americans" who attended the rally. And then: "@SenJohnMcCain should be defeated in the primaries. Graduated last in his class at Annapolis -- dummy!"

In retrospect, all that was just setting the stage for the nuclear explosion that occurred two days later, on July 18. At an event in Iowa, Trump, who never served in the military, disparaged McCain's experience as a prisoner of war in Vietnam.

"He's not a war hero," Trump said. "He was a war hero because he was captured. I like people who weren't captured."

Trump's remarks set off a huge uproar, with some in the press expressing outrage on McCain's behalf. (McCain's own public reaction was subdued.) The conventional wisdom was best captured by Politico, which declared, "Donald Trump might finally have crossed the line."

Of course, he had not. Trump went on to win the GOP nomination and the White House. But the "captured" remarks thereafter defined the McCain-Trump relationship in the public eye. The two went on to take more shots at each other, and sometimes to make conciliatory remarks. ("John McCain is a hero," Trump said in May 2016.) McCain later refused to attend the Republican convention. In August 2016, McCain endorsed Trump, but in October withdrew the endorsement after the Access Hollywood matter.

Finally, there was July 27, 2017, the night McCain's thumbs-down vote killed the GOP's long-held hope -- and Trump's campaign promise -- to repeal Obamacare. The irreparable breach between McCain and the president became even more irreparable. A dying McCain specified the president be excluded from his funeral, and when McCain passed away, the president delayed releasing a routine proclamation in recognition of his life.

The relationship between the two men ended as badly as it began. But always -- and rarely for Washington -- without pretense.