Byron York  |  Dec 21, 2016
The opinions expressed by columnists are their own and do not necessarily represent the views of Townhall.com.
Top Columns
Trending on Townhall Media

President Obama has ordered the Intelligence Community to finish a review of allegations of Russian election hacking by the time Obama leaves office on Jan. 20.

Don't look for the report to settle anything. After years of what some Republicans view as administration obfuscation, manipulation and slow-walking on intelligence ranging from Benghazi to U.S. Central Command assessments of the Islamic State to the papers of Osama bin Laden, distrust of the Intelligence Community is so high in some GOP quarters on Capitol Hill that unless the IC delivers a document of uncharacteristic openness and transparency, the debate over Russia's activities and intentions will continue well into the presidency of Donald Trump.

It hasn't started well. Earlier this month, House Republicans were mystified by news reports of disagreement between intelligence agencies over some aspects of Russian hacking, including the Russians' alleged motivation. On Dec. 12, House Intelligence Committee Chairman Rep. Devin Nunes sent a letter to Director of National Intelligence James Clapper saying, in effect: Why didn't you tell us? Why do we have to learn about this in the media?

Nunes demanded the DNI brief the Intel Committee on the Russia situation no later than Dec. 16. It didn't happen. First, DNI flatly refused Nunes' request. And then, included in an announcement that it would not brief the Electoral College, the DNI also announced it would offer no more briefings to lawmakers until after the Obama-ordered report is finished next year.

"Once the review is complete in the coming weeks, the Intelligence Community stands ready to brief Congress," DNI said in a press release.

After the first refusal, Nunes noted the DNI is "obligated to comply" with the House's "constitutionally vested" oversight activities. The committee is "deeply concerned" by the DNI's "intransigence," Nunes said in a statement.

Nunes' statement suggested the standoff over Russian hacking could at some point change from a war of words to an actual physical confrontation.

The issue is not that Republicans don't believe Russia tried to hack the Democratic National Committee or other Democratic-affiliated organizations. Republicans involved in intelligence issues, like Democrats involved in intelligence issues, know that Russians (along with the Chinese) try every single day to hack into various institutions of American business and governance. They've succeeded many times, leading to some serious breaches. It's an unending phenomenon.

Over the last several years, some Republicans have been dismayed by the administration's lack of response. "Russia's cyber-attacks are no surprise to the House Intelligence Committee, which has been closely monitoring Russia's belligerence for years," Nunes said in a Dec. 9 statement. "As I've said many times, the Intelligence Community has repeatedly failed to anticipate Putin's hostile actions. Unfortunately the Obama administration, dedicated to delusions of 'resetting' relations with Russia, ignored pleas by numerous Intelligence Committee members to take more forceful action against the Kremlin's aggression. It appears, however, that after eight years the administration has suddenly awoken to the threat."

"Suddenly," that is, after Democrats lost a presidential election. Nunes' not-so-subtle point was that Russian hacking did not become a hair-on-fire issue for Democrats until it affected their political fortunes.

Beyond that, though, some Hill Republicans believe the Obama administration has concealed and/or manipulated intelligence at key times in the last few years. Those episodes do not give Republicans any confidence that the Obama Intelligence Community will be straight with them this time.

So what do those Republicans think actually happened during the election? First, they're entirely convinced the Russians tried to hack the U.S. political process because the Russians try to hack everything. They believe that Vladimir Putin probably saw Trump as an unserious candidate who was going to lose; Putin didn't have any more sophisticated political intelligence than anyone in the United States.

All of that is conjecture, or mostly conjecture, at this point. And of course, the administration is likely to produce a somewhat different picture in January -- the big difference being that it will portray Putin as specifically working to promote the election of Trump.

That's what Republicans are trying to head off with their demands for briefings and to see more intelligence. So far, they're making no progress. They're also fighting a side battle with Democrats over the creation of a special committee to investigate election interference, which many Republicans view as a vehicle for Democrats to grandstand and to extend the Trump-delegitimization process throughout next year. (So far, GOP leaders appear determined to block a special committee.)

Finally, there's one huge factor that will come into play next month. After Trump takes office, the Intelligence Community will be under new leadership. CIA Director John Brennan will be out, to be replaced by Republican Rep. Mike Pompeo, a veteran of the House Intelligence Committee who took part in the various battles with the administration over intelligence in the past few years. Yes, of course, the entrenched bureaucracies in the Intelligence Community will stay in place. But new leaders can make a real difference. And after Jan. 20, the fight over Russian interference might take on a new character. 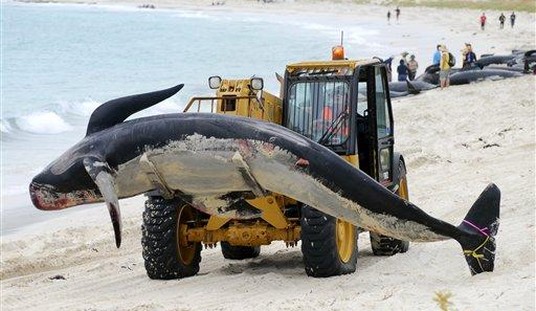