Byron York
|
Posted: Jun 08, 2016 12:01 AM
Share   Tweet
The opinions expressed by columnists are their own and do not necessarily represent the views of Townhall.com. 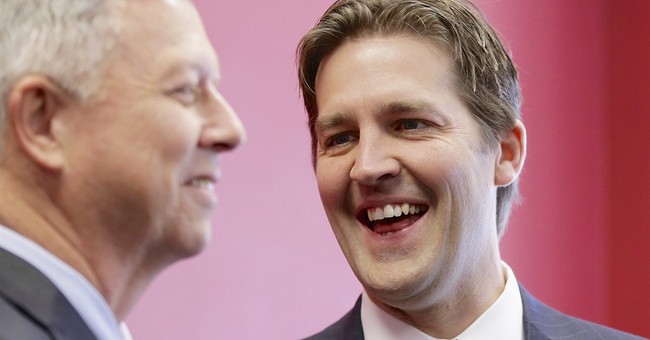 The #NeverTrump conservatives who hope to recruit a third-party candidate to challenge Donald Trump and Hillary Clinton have so far had no luck. A number of potential candidates, well known and not, have turned down the chance to run. But no matter who eventually takes the job, the new party will operate on a set of wishful-thinking scenarios in which victory depends on one improbable event after another.

One such scenario is the hope of winning the election outright. Organizers insist that a third-party candidacy would not be a frivolous exercise, and that the purpose of a run would be to win. But the fact is there is no chance a third-party candidate could reach the 270 electoral votes required to win the White House.

It's a commonplace that the states that have voted Democratic in the last six presidential elections total 242 electoral votes -- just 28 short of a Democratic victory. Republicans have more than 100 electoral votes in states that have voted for the GOP in the last six elections. At this point in the race, it is simply not possible that 2012 nominee Mitt Romney, who won 206 electoral votes, or Nebraska Sen. Ben Sasse, who has never run for national office, or any lesser-known candidate would win 270 votes. It just won't happen.

Indeed, third-party advocates concede there was never a chance. "The way this would happen would never be to win 270," one such advocate said in a recent conversation. "That was never a plausible scenario."

Knowing they would never hit the winning number, the third-party planners instead hoped to create a situation in which neither the Republican nor the Democratic candidate would reach 270, which would send the election to the House of Representatives.

One hopeful scenario envisions a third-party candidate winning Utah, where Trump was trounced in the Republican primary.

Start with the 2012 electoral map, advocates say, in which Obama won 332 electoral votes and Romney 206. Assume Trump wins every state Romney won. Then assume Trump wins Florida, Ohio, and Pennsylvania. That would put him at 273 -- victory -- and Clinton at 265. But then take away Utah, with its six electoral votes, and give it to the third party candidate. That leaves Trump at 267 and Clinton at 265 -- both below the magic 270 -- and the third party at 6. The election would then go to the House of Representatives.

It's far-fetched, to say the least -- no Republican has won Florida, Ohio, and Pennsylvania since George H.W. Bush drafted on Ronald Reagan's popularity in 1988. But even if Trump pulls it off, and also wins every other state Romney took in 2012, what are the chances a relatively obscure candidate could accomplish what Perot could not -- winning a state? Not very high.

The Constitution says the House must vote for one of the top three candidates in number of electoral votes. That means no Paul Ryan or other outsider scenario. So the president would be Clinton, Trump, or the third-party candidate. Assuming the House is still in Republican hands -- remember, this would be next January, when the House that is elected this November takes office -- does anyone believe that Republican politicians, acting in concert within their state delegations, would select the candidate with six electoral votes over the candidate with 267?

Some third-party advocates embrace other scenarios. In one, an independent candidate would draw just a point or two from Trump in a few closely contested states -- enough for Trump to lose. But that, of course, would lead not to third-party victory but to a Hillary Clinton win, which is an outcome some longtime Republican #NeverTrumpers cannot publicly support.

Other scenarios rely on the hope that something crazy will happen. Perhaps Trump will implode, or a third-party candidate will emerge on the left. After all, it's been an unpredictable year.

Finally, some third-party advocates concede they have little chance of winning but just want a candidate for whom a conservative who can't accept Clinton or Trump can vote in good conscience.

It's still not clear whether the third-party run will actually happen. Organizers have promised a strong organization and plenty of money. But with only pie-in-the-sky scenarios, and so far no candidate, hope -- and enthusiasm -- are dwindling.