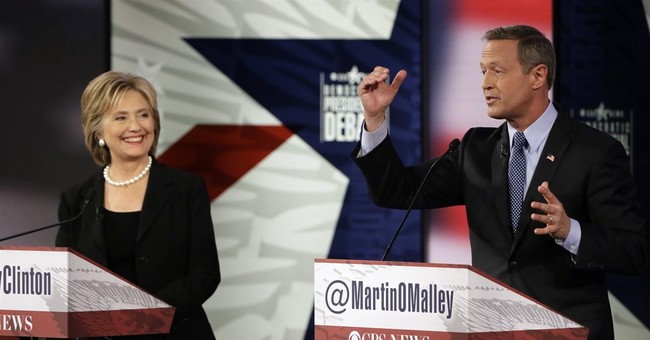 If, before the Democratic presidential debate in Iowa Saturday night, a Republican operative had been told that, in the wake of the Paris attacks: 1) Hillary Clinton would refuse to apply the phrase "radical Islam" to ISIS; 2) Bernie Sanders would maintain that climate change is a greater threat to national security than ISIS or Islamic terrorism in general; and 3) Martin O'Malley, with Clinton's agreement, would insist that the U.S. stick to a proposal to admit 65,000 Syria refugees into the country -- he would have been delighted at the prospect of future ads portraying Democrats as in denial about the threat Islamic radicalism poses to the United States.

"Just to interrupt," Dickerson said. "He didn't say all Muslims. He just said radical Islam. Is that a phrase you don't -- "

Clinton conceded that "you can talk about Islamists who clearly are also jihadists," but stuck to her position that using the phrase "radical Islam" would somehow implicate all Muslims in terrorist violence. Moments later, Sanders and third candidate Martin O'Malley also declined to use "radical Islam."

"The scientific community is telling us that if we do not address the global crisis of climate change, transform our energy system away from fossil fuel to sustainable energy, the planet that we're going to be leaving our kids and our grandchildren may well not be habitable," Sanders said. "That is a major crisis."

"Absolutely," Sanders answered. "In fact, climate change is directly related to the growth of terrorism. And if we do not get our act together and listen to what the scientists say, you're going to see countries all over the world -- this is what the CIA says -- they're going to be struggling over limited amounts of water, limited amounts of land to grow their crops. And you're going to see all kinds of international conflict."

Sanders conceded that "international terrorism is a major issue" that must be addressed. But he steadfastly stuck to his view that the bigger threat remains climate change.

3) O'Malley and refugees. Dickerson reminded O'Malley that he has urged the Obama administration to accept 65,000 Syrian refugees; did that number still stand in light of Paris?

"I was the first person on this stage to say that we should accept the 65,000 Syrian refugees that were fleeing the sort of murder of ISIL," O'Malley said. "And I believe that that needs to be done with proper screening."

A moment later, Clinton agreed. "The administration originally said (10,000)," she said. "I said we should go to 65, but only if we have as careful a screening and vetting process as we can imagine, whatever resources it takes." Insistence on the highest level of vetting seemed an admission that admitting the refugees -- some of whom might not actually be refugees -- poses a security threat to the United States. But Clinton held firm.