Why Elizabeth Warren Should Run For President 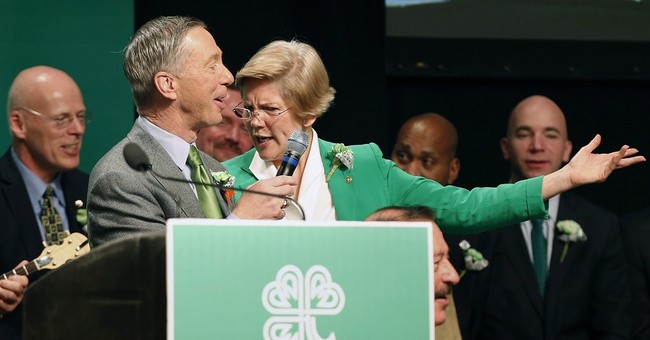 Democratic Sen. Elizabeth Warren is on a publicity tour for her new campaign-style book, "A Fighting Chance." As she talks to the press, Warren is repeating previous statements that she will not run for president in 2016. But her denials aren't really denials, and her party's unique presidential circumstances give Warren plenty of room to run. Judging by what she has said publicly, there's no reason to rule out a Warren candidacy.

First, the non-denial denials. Recently ABC's David Muir asked Warren, "Are you going to run for president?" Warren's response was, "I'm not running for president."

That's the oldest lawyerly evasion in the book. Warren, a former law professor, did not say, "I am not going to run for president." Instead, she said she is "not running," which could, in some sense, be true when she spoke the words but no longer true by, say, later this year.

Muir tried again: "There's nothing that could change your mind?"

"David, like I said, I'm not running for president."

Muir also asked Warren about the dominant frontrunner in the Democratic race. "Do you think Hillary Clinton would make a good president?"

"I think Hillary Clinton is terrific," Warren said, which is no way answered the question. Then Warren added, "We've got to stay focused on these issues right now," which sounded very much like something a candidate might say.

The bottom line is that Warren's statements are entirely consistent with someone who is planning to announce a presidential candidacy later this year. Maybe she will, maybe she won't. But she ruled nothing out.

And why shouldn't she run? With Clinton 50-plus points ahead of any other potential candidate, it's an understatement to say the Democratic Party has put all its presidential eggs in one basket. Unless it's an incumbent seeking re-election, that's never a good idea. So here are five reasons -- there are probably more -- why Warren should make a 2016 run for the White House.

1. Life is unpredictable. Clinton will be 69 years old on Inauguration Day 2017, nearly the oldest president ever. She has had a few health scares. By all accounts, she left her previous four-year stint in government service exhausted. She might not run, and the Democrat in second place in the polls, Vice President Joe Biden -- 74 on Inauguration Day -- is too old to be president. Beyond them, Democrats have nobody -- except Elizabeth Warren.

2. Parties need competition. The primary process isn't just to allow voters to pick a nominee. It's for the candidates to become better candidates. The rigors of campaigning, the day-to-day jostle with competitors and the stress of high-profile debates all make candidates better. Conversely, a cakewalk through the primaries could leave a nominee in poor fighting shape for a general election. Warren would make Clinton a better candidate, and vice-versa.

3. The Left wants a hero. Clinton has never really excited the most liberal wing of the Democratic Party. They see her as an overcautious centrist like her husband, and on top of that, many have never forgiven her for voting to authorize the war in Iraq. Warren, on the other hand, has thrilled the Left with her attacks on inequality, plutocrats and big financial institutions.

4. Hillary ran a dumb campaign in 2008 and might do so again. For a group of seasoned veterans, the 2008 Clinton campaign showed a stunning ignorance of how to win delegates in a Democratic contest. Rival Barack Obama exploited that weakness brilliantly. For example, Obama collected more net delegates by winning the Idaho caucuses, with 21,000 participants, than Clinton did by winning the New Jersey primary, with more than 1 million voters. Clinton just didn't pay attention to the smaller stuff, particularly the caucuses, and her cluelessness helped Obama win. It might help another rival in 2016.

5. One more time: Life is unpredictable. This is Warren's only chance to run. She will be 67 on Inauguration Day 2017. (Has any party ever fielded a group as old as Clinton, Biden and Warren?) A run in 2020 or later is out of the question. Hillary, now struggling to define her legacy as secretary of state, is running on pure entitlement. The only thing about her candidacy that truly excites the Democratic base is that she would be the first woman president. Of course, that applies to Elizabeth Warren, too. And Warren would present a far fresher face to voters than Clinton, who has been in the national spotlight since 1992.

Yes, Warren is far back in the polls, but so was Obama in 2007. At some point, Democrats are going to realize the precariousness of their unthinking devotion to a single, flawed candidate. Elizabeth Warren could remind them there's someone else to vote for.