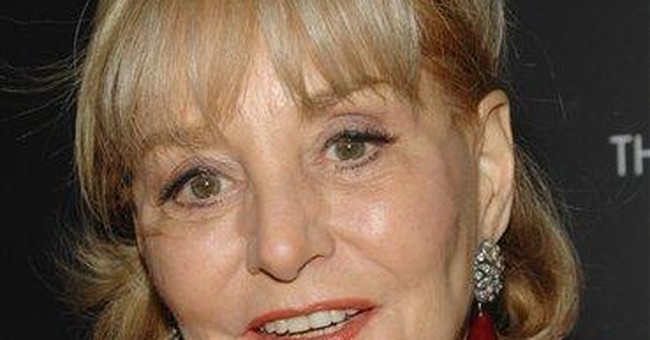 It’s an odd thing about the way in which the two genders deal with their sexual experiences. Early on, it’s most often males who do all the bragging, even if they have to lie about it. However, as the years go by, it tends to be the female of the species who does most of the boasting. I’m not sure whether that’s because as women age, they’re anxious to remind everyone that once upon a time they were hot stuff or whether it’s just that women have better memories and are far more likely to keep diaries.

What brings this to mind is that Barbara Walters, in order to hype her new book, is blabbing all over the place about an affair she and former Massachusetts Senator Edward Brooke carried on during the 70s. That is, the 1970s, not their seventies, although, in my opinion, that would have been far more newsworthy.

Apparently, the in-crowd in Washington, D.C., was well aware that they were a twosome at the time, just as most people here in Hollywood knew that Rock Hudson was gay and that President Kennedy wasn’t just coming to Southern California to work on his tan. It was a far different time, though, and except for Confidential magazine, sleazy gossip hadn’t yet turned into a major American industry, and most folks, if asked, would have guessed that “paparazzi” was an Italian entrée.

In terms of values and mores, much has changed over the years, and rarely for the better. Once upon a time, unless, like Errol Flynn, you had built a career on being a scallywag, it behooved actors and actresses to behave, in their public lives at least, like seminarians. Thanks to the famous morals clause that was boilerplate in all Hollywood contracts, careers could be short-circuited at the snap of Louis B. Mayer’s fingers.

Back in those days, every alcoholic leading man and every round-heeled leading lady had to deliver a better performance for Hedda Hopper, Louella Parsons and the fan magazines, than they did for the movie cameras. These days, it often seems like actors and actresses would rather vie for ugliest mug shot than for Oscars.

Several years ago, in my carefree bachelor days, I dated a fairly well-known actress. Being that she was bright, very funny and quite literate, I wasn’t too surprised when she decided to write her memoir. Perhaps because she was still in her 30s, I was taken aback when I read the as-yet unpublished manuscript and found that she was going public about a brief affair she’d had nearly 20 years earlier with a certain married actor. I was already aware of the relationship because she had told me about it. But I couldn’t see the point of writing about it, and I asked her why she felt it was necessary.

“Lots of things are true that don’t have to wind up in the pages of a book. The guy was married at the time. Why on earth would you want his kids to know he was cheating on their mother with you?”

“Maybe it wasn’t for you. You weren’t even 20 years old yet. You were a teenager and clearly besotted. But you were co-starring in a play with him. That made you convenient, as well as available. He didn’t even have to leave the theater. And you told me yourself that the affair ended when the play’s run ended. So, however you may have felt about him at 19, it’s pretty obvious that he, in his 30s, married with children, saw you as the human equivalent of fast food.”

Well, the chapter stayed in the book and the book sold reasonably well. I’m sure she and I would have split up in any case. Successful actresses are notoriously high maintenance and, by nature, I’m a pretty lazy guy.

But to get back to Barbara Walters, I’m sure she’s going to catch plenty of flak from her cronies in the media. Certainly not because she’s using an affair, long over and done with, to hawk her book, and certainly not because Sen. Brooke is a black man, but because….he was, of all things, a Republican.