Liberals and Their False Idols 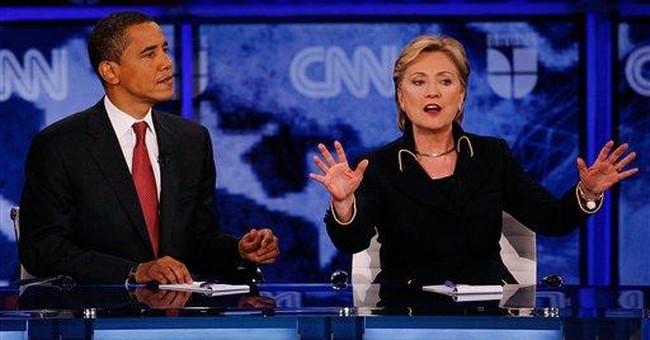 There are major differences between liberals and conservatives, and that’s why I never know what people such as Barack Obama are talking about when they speak of bringing us all together. And I suspect that Jeremiah Wright’s surrogate son doesn’t know, either.

For instance, if I support the surge in Iraq and you insist on bringing the troops home by next Thursday, what’s our compromise? Bringing our troops only partway home? Say as far as the Canary Islands?

If you’re in favor of same-sex marriages and I happen to think the whole idea is a very silly joke, where’s our common ground? Doing away with opposite-sex marriages?

If I believe in capital punishment and you don’t, what constitutes a midway point between our positions? Only executing convicted killers whose last names start with the letters between A and M?

One of the most unpleasant things about liberals is the way they tend to place the politicians they endorse on pedestals. Frankly, I have never understood this phenomenon. How is it that so many people turn into besotted teenagers once they decide to vote for someone?

I’m not saying that I don’t like some politicians more than others. I like those who vote the way I want them to and I dislike the ones who don’t. But when you get right down to it, most politicians on either side of the aisle are pretty mediocre human beings. What is their great accomplishment, after all? These are people who have devoted their lives to convincing other people to hand over their hard-earned money so that they can get or keep a job that essentially consists of spending other people’s tax dollars. Often enough to keep the tabloid press occupied, these palookas are caught taking bribes, using drugs and getting involved in sex scandals. In other words, they often behave like the rock stars they aspire to be, even though they can’t sing, cavort around a stage or play a musical instrument.

Politicians, unlike cops, firemen and members of the military, are not called upon to do anything dangerous, heroic or the least bit self-sacrificial. Instead, they build up fiefdoms on your tax dollars, go on junkets around the world, receive the sort of health care only millionaires can dream of and the sort of pensions no working stiff can even imagine.

If they deign to place their names on ghost-written books, millions of you will rush out to buy them, and if they manage to give a speech, also ghost-written, that doesn’t put everyone into a coma, they’re hailed as great orators.

I swear, when I see the ladies gazing up at Hillary Clinton, adoration shining in their eyes, or at the hordes of born-again left-wingers gathered to watch Barack Obama transform water into whine, I feel grateful that I don’t know any of them.

It’s not because I’m a conservative that I haven’t mentioned John McCain. For one thing, most Republicans have no illusions about him. Many of them will vote for him in November for one very good reason; namely, that their blood runs cold at the mere thought of either Democrat being the next commander-in-chief. For another thing, conservatives tend to be realists, and just about the only politician who really excites them is Ronald Reagan, and he’s been dead since 2004.

I don’t happen to think it’s a coincidence that left-wingers are much more juvenile than conservatives when it comes to making idols of politicians. As psychiatrist Lyle H. Rossiter, Jr., points out in his new book, “The Liberal Mind: The Psychological Causes of Political Madness,” liberals are very much “like spoiled, angry children. They rebel against the normal responsibilities of adulthood and demand that a parental government meet their needs from the cradle to the grave.”

For over 35 years, Dr. Rossiter has diagnosed and treated more than 1,500 patients and examined nearly 3,000 civil and criminal cases as a board-certified forensic psychiatrist. Regarding the sort of liberalism being espoused by Obama, Clinton and their devout worshippers, he states: “A social scientist who understands human nature will not dismiss the vital roles of free choice, voluntary cooperation and moral integrity, as liberals do. A political leader who understands human nature will not ignore individual differences in talent, drive, personal appeal and work ethic, and then try to impose economic and social equality on the population, as liberals do. And a legislator who understands human nature will not create an environment of rules which over-regulates and over-taxes the nation’s citizens, corrupts their character and reduces them to wards of the state, as liberals do.”

Dr. Rossiter goes on to say that the liberal agenda preys on weakness and feelings of inferiority in the population by creating and reinforcing perceptions of victimization; satisfying infantile claims of entitlement, indulgence and compensation; augmenting primitive feelings of envy; rejecting the sovereignty of the individual and subordinating him to the will of the government.”

In summation, Dr. Rossiter writes: “When the modern liberal mind whines about imaginary victims, rages against imaginary villains and seeks above all else to run the lives of persons competent to run their own lives, the neurosis of the liberal mind becomes painfully obvious.”

At the risk of burying you all in psychological jargon, suffice to say that the good doctor agrees with my own diagnosis: Liberals are cuckoos.