#BlackLivesMatter Will Protest Us Into Recession

Bryan Crabtree
|
Posted: Jul 12, 2016 12:01 AM
Share   Tweet
The opinions expressed by columnists are their own and do not necessarily represent the views of Townhall.com. 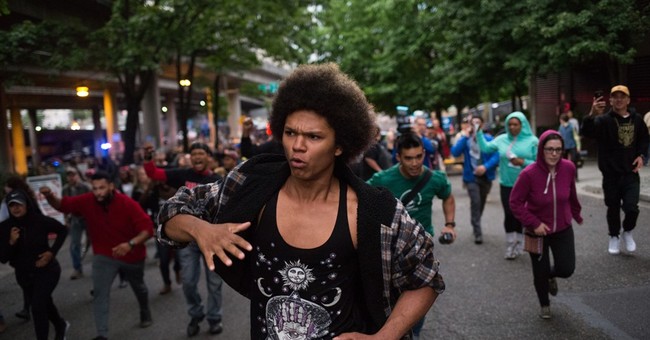 People are going to start getting very angry at these protesters. There seems to be no direction, purpose or solution-objective to these protests which are creating a societal disruption. I know they tell us they want fair treatment by police in the black community, but these assertions are devoid of facts or solutions.

As I write, there have been four days of disruptive protests in downtown Atlanta. Last night, I watched the protest unfold from my condo building. This usually involves some of the most hideous traffic you’ve ever seen as a result from protesters blocking the highway. How do they expect to have their cause taken seriously when they don’t respect the people they are affecting?

On Saturday, I visited a Lowe's and Home Depot. I haven't seen those stores that empty since the 2008 recession. Clearly, people are nervous about what's unfolding on the streets of America - and they’re afraid. In addition, when the resources and focus of many cities are directed toward massive crowds of curmudgeons blocking thoroughfares, interstates and shutting down businesses there is bound to be an economic toll in addition to further violence.

If law and order is not restored, then fear will prevail, consumer spending will decline and businesses will suffer. As a result, this chaos will manifest even more economic destruction into the very communities they are protesting to help.

While I do recognize there is and undercurrent of racism that still exists in our country, the level to which it’s being touted is nothing less than fraudulent. Representative Elijah Cummings (D) (Maryland) stated this past weekend that for blacks, they live knowing “their life could end when they’re pulled over.” This phrasing is precisely what I stated in the foregoing: fraudulent even if perceived. It’s also demagoguery at its worst.

Internally, these statistics show that there is more policing in the black community leading to a higher per capita rate of fatality – but to ignore the crime statistics in these communities would be gross negligence. There is going to be more police presence in areas with higher crime rates. In Chicago, where crime is out of control, the black middle-class families are fleeing the city. Over 200,000 have fled in the past 14 years further driving the cities per-capita rates higher.

The police ‘problems’ in the black community are rooted in the horrific economics, not police- brutality. In each protest, the protesters disrespect local businesses, overwhelm local police departments (notwithstanding overtime and hot weather) and distract all of us from proactive solutions.

The chilling reality is that we are becoming not just a divided nation, but a broken one. In St Louis, this past weekend, twenty-year-old Tyler Gebhard, an African-American, was shot dead after breaking into a police officer's house by smashing through the back window. The officer and Gebhard had been arguing on social media about Black Lives Matter. Lawlessness seems to prevail over simple disagreements.

To be fair, there have been many peaceful protesters whom I believe, in their heart, simply want to cure racism/violence in our culture. Unfortunately, they have been led to believe that the instances of such racism are much higher than they really are. While the protests were not inherently violent over the last weekend, there have been several exceptions. Unfortunately, the images of this chaos reinforce (even propel) the perception of the black community they are protesting to erase.

Most of these organized protests do not bring out the best in people. In fact, it’s bringing out the worst. It takes an ‘all or nothing’ tone and paints the police as bad, the black community as oppressed and the whites as apathetic. While these forged narratives are generally untrue, they represent only a very small vocal minority. Much of the rhetoric appears to be heartache and resentment based not on current reality but on historical reality. This conflation of the past into the present is expanding racism not reducing it by frustrating the masses.

All Americans now live with an ambient terror threat. It could be a self loathing radical Islamic terrorist at a gay nightclub, a hate-filled doctor at a military base, a bipolar football star who attacks a cop at home, a racist-extremist who kills police or any other unimaginable moment where our law enforcement isn't 100% perfect.

If we focus on the terror, the hate, the division or the radicals it will get worse. Whatever you focus on will expand. We must focus on the underlying realities. Terror comes from hate – hate comes from fear. Black people have fears. Many in the White community don’t understand the root of these fears. The mainstream media lies and ‘fans the flames’ of division. Many leaders find power in using the media’s distortions to gain power. WE (as in Americans regardless of race) are all being played. We need to listen to each other more.

It is time for the silent majority to become extremely vocal, drown the hysteria by stating the truth and proposing solutions that unite this country again - before we destroy it.

If we do not, there will be more riots, protests and fear. As law and order diminish, we will be forced back into recession.