The Race to the Left: Rewarding Failure

Bryan Crabtree
|
Posted: Feb 13, 2016 12:01 AM
Share   Tweet
The opinions expressed by columnists are their own and do not necessarily represent the views of Townhall.com. 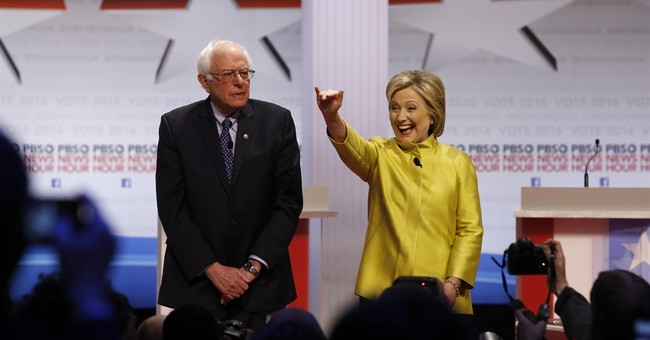 When is the last time you heard a liberal politician propose a program that would actually help businesses grow and create more jobs? It's never that. It's always a money grab through hidden taxes and regulations to force businesses and successful people to support programs for those who are failing in life.  They never blame the individual for their own bad decisions. They always blame Wall Street, big business and rich people. They’ve painted a conspiracy theory of billionaires plotting to steal from the poor.  It’s not true.

Just take a look at the list of policies they want to pass and fund: universal pre-K, free college for everyone, more taxes on the rich to fund the programs, increased minimum wage to unsustainable amounts and extended paid-leave.  Hillary Clinton and Bernie Sanders’ offer a host of programs meant to shift the burden of personal responsibility from the poor to the rich.

First, there’s universal pre-K.  This is meant to help children who are most afflicted by poverty.  According to a study by The University of Kansas, the average child from a high-income family hears about 50 million words by the time he's four. By contrast, a child on welfare hears just over 15 million words.  The problem with this type of study is that it only surveyed and followed 42 families to conclude these findings. Before we haphazardly throw billions and billions of dollars at a real problem, we might want to make sure it has some impact on finding an actual solution. But to the constituent voter of a Democrat, free daycare is enough of a bribe to get the vote.

Next, there’s free college for everyone. This is part of both Hilary Clinton and Bernie Sanders’ plans as they run for president.  I remember growing up and being told I had to make good grades and save money for college. This caused a bit of financial fear which I channeled into discipline and responsibility for my own education. With the added help from my parents, a couple of scholarships from good grades and a small student loan which I paid off aggressively after I graduated, it wasn't a problem for me. And I did not come from a financially privileged family.   Because liberal elites like Clinton and even Sanders, who've never actually worked in the private sector, they have no idea how their policies negatively impact the people they want to help.   Moreover, if you flood our colleges and institutions with students who otherwise wouldn’t go, then it will devalue a four-year degree.  What's next, free masters degrees for all students in America because the college graduates are falling behind? They already are.  You can give a loser all the college credits in the world, and if they don’t learn personal responsibility or how to overcome adversity, then they are still going to be a loser.

Thirdly, in order to pay for all of these bribes, we have to find the money. So, what better way to pay for these kickbacks than to turn to America's job creators and strip some of their wealth and revenue, and redistribute it into government run programs? Now that everyone has a college degree, we can start working on the next crisis: not enough jobs for all these well-educated idiots which will require even more government programs and taxes.

Fourth, there is the effort to increase the minimum wage to $15 an hour (living wage).  A study of the Walmart in Oakland, California pointed out that the profit margins of those stores had been cut in half as a result of the $12 an hour wage-law.  With the new proposal of a $15 an hour wage on the table for Oakland California, Wal-Mart in that city would operate at zero profit.  With no profit, yet still bearing all of the risk, they've elected to close a couple of those stores. Of the 289 stores Walmart is closing, dozens are shutting down because they can’t keep up with this ‘living wage’ being forced on them.  This may shock you. The average number of Walmart employees is over 3000 workers.  So, for every store that these liberals force out of business, they've given a few people a raise and cost thousands more their jobs.

Finally, there is the universal paid-leave initiative by the liberals. This invented tragedy asserts that parents should have more time to spend with their children once their baby is born.  I have an idea.  Calculate career and family planning decisions, in advance, and budget for them.  I’m not paying people not to work.

Perhaps I'm confused. I thought the purpose of businesses in America was to pay people commensurate with their skills and knowledge, make a profit and reward their shareholders for their risk. But with programs such as extended paid leave, it appears these “never-had-a-real-job-liberals” think that American businesses are the community church, charged with philanthropy and community service.  My belief is that a well-run, successful and profitable business can in turn be a remarkable tool for community service. But, as more businesses struggle to hit their margins as a result of government regulation, there will be less goodwill and more division from American businesses.

Successful people are successful because they adapt to the circumstances around them. They find ways to succeed despite life’s challenges.  Successful people use discipline to continue being successful. It's those in poverty, with drug addiction, and who are living a life without purpose or discipline who will continue to fail in greater numbers, because they ask the rest of us to pay more to take care of them because they're too selfish and irresponsible to take control of their own lives and change.

People who vote for liberals like Sanders and Clinton are confused, emotionally immature and lack the discipline to actually create the change they so desire.