Bruce Bialosky
|
Posted: Feb 07, 2016 12:01 AM
Share   Tweet
The opinions expressed by columnists are their own and do not necessarily represent the views of Townhall.com. 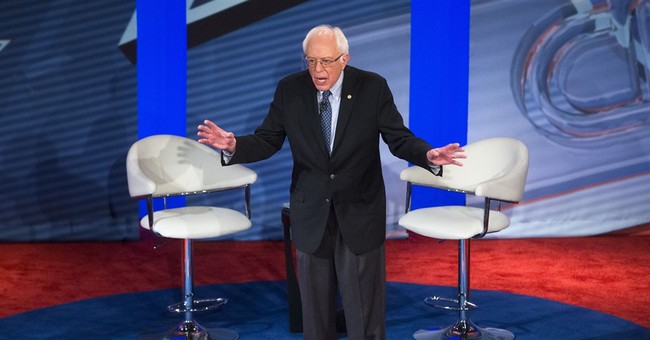 Bernie Sanders, everyone’s favorite socialist running for the American Presidency, has as one of the central tenets of his campaign that college should be free to all Americans.  It seems to be a popular proposal with some, especially those paying the circumspect fees colleges are charging these days.  It is just plain stupid and let me explain why.

Let’s start with the basic concept that nothing is free.  You may be saying that is a banal statement, but it is not because so many people just don’t get it.  Obviously that is indicated by all the people who like his proposal.  When my children were young I taught them that the mints or matchbooks at the front of a restaurant were not really free for the taking.  They were included in the cost of our meal.  Over time they absorbed the concept.  On the other hand, fly up to visit our Canadian cousins sometime.  Ask them what they like about Canada and more often than not they will tell you about the “free” health care.  Then try to enlighten them that they have a misconception.  Usually their eyes glaze over and they float back into their alternative universe where they make believe things just appear out of thin air.

There are four principal reasons why this proposal is so massively idiotic.   The first is that federal money is one of the main reasons college costs have soared.  Since I attended college in the 1970’s, access to federal loans, grants and various disguised forms of free money have driven up the cost of a college education.  With the soaring influx of federal funds, the annual costs of a college education skyrocketed forcing states to pull back on their commitments due to restricted and drained state budgets.

Bernie’s proposal acts to accelerate the fire by pouring more federal funds on the flames and eliminating any control on costs from individuals rejecting the soaring costs.  Now every dollar going into to college coffers will be OPM (other people’s money).  No one will be watching the store.

With the complete takeover of colleges by the federal government budgets, we come to reason number two.  Our colleges have been run privately or by states or, in the case of community colleges, by local governments.  The federal government will dictate all that goes on at college campuses.  You think colleges are misguided currently, wait until they are run by a faceless, nameless, federal bureaucracy.

The third reason is control of costs.  The biggest war coming is the fight against cost controls.  The colleges want unlimited budgets and they want unfettered control.  While a few governors (all Republican) have targeted colleges for their out-of-sight costs and redundant, bureaucratic staffing, there has been blood-letting in this fight.  The colleges are huge economic drivers in the districts they inhabit and they throw their weight around with their representatives attempting to kill any efforts to make them cut their budgets.  Leftist college administrators and professors viciously protect their largess and they are not against lobbyists who they engage for their purposes.

The fourth reason is Sanders is focused totally on input and seemingly ignorant of output.  One of the wars we have in this country is over H-1B visas which our tech companies argue they need because our colleges are not producing enough engineers to feed their development.  My reaction is that with the massive amount of college graduates in America, why can’t our sons and daughters fill those needs.  The simple answer (not simplistic) is our colleges graduate far too many young people with useless degrees.  We all know that.

Sanders’ proposal would throw more money at a system that produces too many college graduates that have been given no additional advantage other than the self-delusion that their lives are improved because they can say they have “a college degree.”  In fact, he will accelerate this system.  No one will have individual responsibility for their actions and no one will have ramifications if they fail.  Even more people will be encouraged to spend four years of their lives getting useless degrees because the student or their family will not bear the financial burden.  Just think of the increase of Uber drivers who can offer witty repartee because the government has funded their “college education.”

Sanders has not thought his way through this immensely dangerous proposal.  He does not have to because he is a leftist and if it makes him and his followers feel good that is the only thing that is important.  But don’t think Bernie’s eventual loss will be the end of this.  Mark my words, ten years from now this will be mainstream Democratic Party policy.  With the right president, we could have a nationalized college system and we will have a new “right.”
Biden Nominates Maritime Administrator with Zero Shipping Experience Amid Supply Chain Crisis
Spencer Brown
Washington Post Editor Gets An Earful After Complaining About Maskless Elevator Rider
Julio Rosas