Living In the Arab World 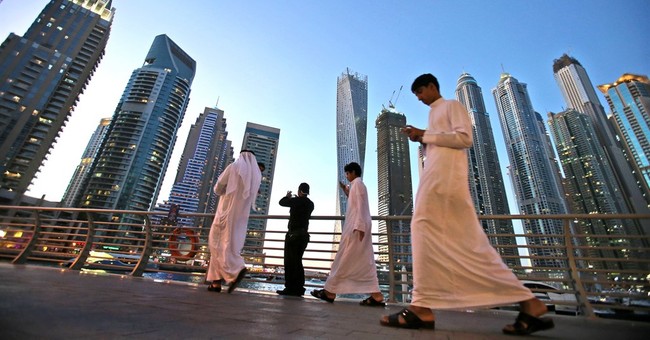 You are going where? And why are you going there? And you are doing it over Thanksgiving? Those were the universal questions when we told people that we were going to Dubai and Abu Dhabi. And, to boot, flying on Air France through Paris a week after the heinous attacks. The immediate reason for the trip was the final Formula 1 race of the season taking place in Abu Dhabi. The proximate cause was that my long-time friend and business associate had a son living with a very influential family from the Emirates and we wanted to take advantage of the perks while he was still living there. So we set off on our 20 hours of travel to arrive in Dubai.

We first had to familiarize ourselves with the United Arab Emirates (UAE). We had been to Egypt, but that was in 2007 before the multiple changes in governments and the related disruptions. The UAE was formed in 1971 from seven emirates which were previously under British protection. Bahrain and Qatar were two emirates (states) which decided to go their own way. Abu Dubai and Dubai are best known worldwide of the seven emirates, with Dubai becoming internationally known for its visual economic development and unique buildings including the tallest in the world – Burj Khalifa.

After spending a few days there, the best description I can think of is that this is the Singapore of Middle East with a tinge of Las Vegas. Though some disparage Singapore for restrictions on public activities, when we visited there we found a thriving city. A city where we were in the subway stations at 2 a.m. and never looked over our shoulder. We never saw a policeman until two hours before leaving for the airport. The streets were clean, there was no graffiti and you felt totally safe from any crime. Dubai feels that way; it just has men wearing kandoura and keffiyah and women wearing abaya and hajib.

The explosion of commerce in Dubai is nothing less than stunning. You see some pictures of building or hear some tales from people who stop by on cruises, but until you walk the place and drive around with an experienced driver (ours was named Mohammed who was born in Dubai, but his family originates from Pakistan) you don’t get the gist of what is happening. The endless building cranes – cranes everywhere, too many to count. The wealth from oil and natural gas is being used to establish a commercial zone which is hoped will provide the Emiratis (that is what the estimated 1.2 million fully-recognized citizens of the Emirates are called) with a sustained existence long after the energy runs out.

1. Their airline (Emirates) is poised to become the largest in the world.

2. The Dubai Mall has the most stores of any mall in the world (more than Mall of America even though it is smaller in size). That is not good enough. They are planning the Mall of the World with 2,000 stores. The phrase “shop till you drop” was born for this.

3. One area of development 15 years ago had six significant buildings. Today it has over 200 hundred -- many of them what we would call skyscrapers. Some of the most inventive and fascinating architectural designs to be seen anywhere. It also has a fully developed marina area with all the cultural aspects you would see at marinas such as Baltimore, MD.

4. They have many culture draws including aquariums and gardens. LEGOLAND is scheduled to open next year with a revived plan for a Universal Studios variation attached to the Mall of the World being discussed. At the Mall of the Emirates (a mere 700 stores) you can go to Ski Dubai, where you can ski, toboggan or hobnob with penguins.

5. They are building canals throughout the city. Water they have plenty of as they have a desalination plant (unlike the leftists who run California).

6. Abu Dhabi has the largest Mosque in the world and it is extraordinarily beautiful.

7. All this adds up to 11 million tourists a year. They are hoping with all the new attractions to pump that up to 25 million.

There are an estimated 9 million people living here. Only the Emiratis have full rights. But the others are provided schooling, medical care and modern housing. They do have some bachelors here working in construction whose living conditions we were not privy to, but we were assured they are nothing like the conditions in Qatar for the construction workers on the stadiums for the World Cup. On the other hand, there have been limited reports of similar inhumanities.

If you want a job here there is one major qualification – you better speak English. That is the common language with all signs in Arabic and English, but wherever you go English is the language of commerce.

Four million of the transplants who literally are here from all over the world are Christians. There appears to be more Hindus (from India) than Emiratis. Many of these people have their own businesses. One of the aspects of a benevolent dictatorship is that certain shopping districts are bunched together (called “souks”), such as the spice stores, the gold stores etc. These merchants all compete and thrive.

The one hitch is that no one can start a business without an Emirati backing their operation. You can consider it paying a royalty to the locals or you can think of it as protection money like the Mafia provides to businesses in places like New York and New Jersey. Either way, you don’t just come here and open shop in the Emirates without the favored Emiratis having a piece of the pie.

That has not stopped people coming here from all over the world. We are used to encountering people who work in the service industry far from their homes. But there is a virtual United Nations working here. People from all the countries of the world have been tracked to having come here to fill the jobs of the booming economy. So much so that when you meet someone you asked them where they are from, never expecting to meet a native Emirati.

Other than the public restriction of PDAs (public displays of affection) and revealing clothing, and prayer rooms everywhere (even at the Formula 1 race track), most times you forget you are in an Arab nation. None of the life restrictions that Saudi Arabia demands or the anti-humanity of ISIS, Boko Haram, Hamas or Hezbollah.

This is a modern Arab society as most would hope it to be. Women drive and work, but still have limitations on their lives. It is very uncomfortable for me to see when some women are covered from head to toe. I find it non-respectful of women in the modern world.

It is not perfect, but maybe as close as we can hope for blending the modern world with the long history of the Muslim people. And maybe someday even greater advancements.

P.S., It was easy to get a traditional Thanksgiving meal here and there are many signs of the upcoming Christmas celebration. And did I mention there are no taxes except for tourists.