Priebus, Take Control of These Debates 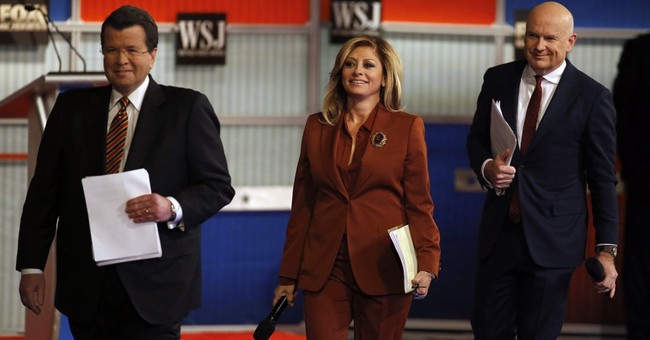 Concern, for me, about how Republicans have not properly monitored their participation in debates is not new. Since the last presidential cycle I have been all over my friend and National Committeeman Shawn Steel. We were tag-teamed by Candy Crowley (“supposed” moderator) and President Barack Obama in the debate discussion regarding Benghazi in 2012. Reince Priebus, RNC Chair, vowed to clean things up, but he clearly has not.

We all know what a disaster the CNBC debate was in regard to questionable moderators posing as journalists asking rude and/or irrelevant questions. That turned out to be a victory for the Republicans as the candidates stood up to the negative onslaught while CNBC took a near universal bashing for their mishandling of the situation. I think the president of the network should have been fired for the missed opportunity his hack journalists caused. They had the largest audience in their history and not one viewer will return to the network regularly, if ever.

But the entire situation goes deeper than that. Fox Business Network (FBN) had the next debate and they set criteria as to whom would be on the main stage. Candidates had to have 2.5% in national polls. This is an inane standard. As you can imagine, I am a regular watcher of much television news. Whenever a new poll comes out it is announced with great fanfare and then universally discounted by the analysts and especially the campaigns (except for Trump). That is because the validity of these polls so far in advance of an actual vote are particularly questionable based on historical perspective. In addition, the validity of polls is being questioned even by the Gallup organization which has stopped taking these polls.

More importantly, why would anyway care about a national poll at this time. There are two reasons to not care. First, who is concerned about what I think? I am a resident of California and my vote never counts in a national election. I dream of the day a Republican wins this state (or Oregon or Washington), but those days are far off. Why would anyone count what our opinion is regarding a Republican, particularly in a primary, particularly at this time? Second, the only states that matter in the immediate future are Iowa, New Hampshire, South Carolina and Nevada. If a candidate survives that gauntlet then he or she will be able to forge forward to Super Tuesday. Nothing else matters at this time than these four states, yet a network decides the relevance of a Republican candidate based on national polls.

Because of this Chris Christie, who was registering at 8% in recent polls in the first primary state (New Hampshire), was booted to the secondary debate by FBN. The banter was about the challenge for the network making these decisions and the effects upon the Christie and Huckabee campaigns from the main debate elimination. The discussion should be about one thing and one thing only: why is Priebus and the Republican National Committee (RNC) letting FBN establish the criteria instead of establishing their own criteria?

The RNC had promised they were going to take control of the debates this cycle. To this point they have allowed the network hosting the debate to determine who is on stage established by their own faulty criteria. They sometimes cast radical moderators who are characterized as people who would never vote in a Republican primary to ask fatuous, insulting questions. Of course, not all the moderators were of that nature nor were all the questions insipid. The questions should be hard-hitting ones meant to elicit detailed answers (not 30 or 60 second replies) that allow the debaters to define their positions and their knowledge. Competing candidates should be allowed to directly query or counter their fellow debaters on points where their positions contradict each other. That is what is called DEBATE.

To me the best moments of the debates were in the first one on Fox News where twice candidates with opposing views on a topic went after each other. This was replicated on the FBN debate where different viewpoints were stated without participants calling each other names. The interplay between Chris Christie and Bobby Jindal was particularly good on the undercard debate. That was marvelous and illuminating. As long as they stay away from ad hominin attacks, we need more of that repartee.

All this concerns me leading up to the presidential debates in 2016. Certainly the commission in the past has picked some great moderators like Jim Lehrer, Bernard Shaw and Bob Schieffer. They have also picked a few that have had obvious bias like Carole Simpson (1992), Gwen Ifill (2004, 2008) and Candy Crowley (2012).

Here are some suggestions. After 17-plus years as the leading news channel, how about someone from Fox? Why not Brit Hume, Chris Wallace or Bret Baier? They are three top-flight journalists who will be even handed in their questioning. Or why not Maria Bartiromo for the debate on economics. She is considered the pre-eminent face of economic journalism on TV. Scott Pelley would be safe or bring back Bob Schieffer -- a real pro. Mr. Priebus, get on the phone to Frank Fahrenkopf, the Republican on the debate commission, and tell him his old protégé from Reno has a few suggestions. Most importantly make sure he approves no Candy Crowleys.

Mr. Priebus, your job is to assure the primary debates run well and are equitable for each candidate. That they reflect well on the candidates giving them a strong base for the eventual nominee to launch their campaign as the chosen nominee. Then your job is to make sure the Presidential Debates reflect that nominee in the best light possible, but at a minimum do no harm from the hands of others.

Mr. Priebus, so far it appears that you are not doing your job. FBN did not save you here. Mr. Priebus, it is high time you do your job.
ESPN Reporter Leaving Company Over COVID-19 Vaccine Mandate
Landon Mion
Gaffe-Prone Joe Biden Has Done A Stunningly Low Amount of Interviews During His Time in Office
Rebecca Downs
The IRS Might Have Something to Say About How Kamala Harris is Campaigning for Terry McAuliffe
Rebecca Downs
Fauci Says He Became a Political Target Because He Stands for 'Science, Data and Evidence'
Landon Mion
Virginia Democratic Party Files Complaint Against Youngkin Campaign, Claims Ads Failed Disclaimer Requirements
Landon Mion
Arkansas GOP Governor Says State Governments Should Not Ban Employers from Imposing Vaccine Mandates
Landon Mion