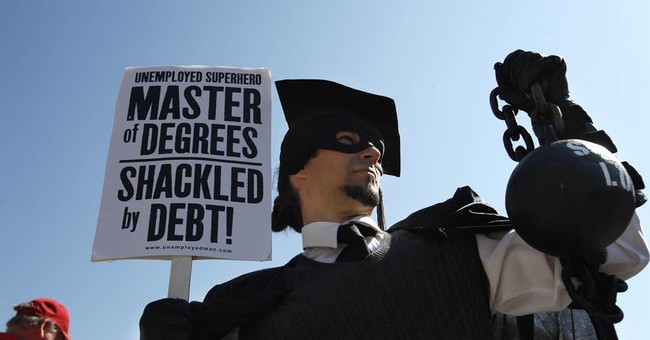 If you focus on a major issue about which nothing is being done then you can skip ISIS, Immigration or jobs. But if you want to talk about a looming crisis that gets mentioned frequently, but about which absolutely nothing is being done, then that is the booming student loan portfolio that is going to crash down on America’s head soon. This Congress – the 114th -- needs to focus on the looming student loan crisis and the root causes of the crisis.

I have written about various aspects of the cost of college education numerous times over the last few years. As far back as November 2011, I defined that college costs were rising at four times the cost of inflation for the rest of the economy. This information came from Naomi Schaefer Riley’s book The Faculty Lounges. In November, 2012, we wrote about how Tom Harkin’s committee in the Senate (Senate Committee on Health, Education, Labor and Pensions) was skewering for-profit universities which are less than five percent of the student loan problem while barely speaking to the “non-profit” universities which are the real problem. This committee was on its fourth study of for-profit universities and had not addressed at all the exploding cost of state schools and private ones like Wisconsin and Yale. All of these schools receive federal money so all of them fall within the purview of the Congress.

President Obama and his minions have brought the student loans under the auspices of the federal government. Senator Elizabeth Warren (D-MA) wants to decrease the interest rates being paid on these loans because she feels some are too high. Neither one wants to address the root cause, which is the soaring cost of a college education. They would never do so because their friends in the “intelligentsia” would have to answer questions about their mismanagement of resources. Their solutions all have to do with relieving the debt from the students. If you do an internet search on student loan forgiveness you will find a multitude of Obama-related plans to lessen the burden of the borrower at the cost of the American taxpayer.

The recent budget proposal by the Obama Administration buried the fact they are planning on writing off $21.8 billion of these student loans this year. The Politico article stated that when this was addressed to the Administration they stated it was a ‘pittance’ compared to the overall portfolio of loans. That is $21.8 billion quietly being added to the national debt.

The increase in tuition keeps marching on, exemplified by the announced 25% increase by the University of California system -- one of the largest in the country. UC President Janet Napolitano announced that the increases are necessary “to maintain the University of California in terms of academic excellence.” The annual increases of 5% fly in the face of our current inflation rate of 1.3% in the country. It has been asserted the real reason for the increase is the estimated $8-16 billion shortfall in pension funds due to the highly-compensated employees of the UC system. Either way, the students are going to have to make up the difference by either draining family assets or increasing the amount of loans they take out to an even higher level, creating a further impediment to repayment. Those loan balances are stifling the economic growth of a generation by hampering their ability to move forward with their lives and do things like start their own businesses or buy their own homes.

These increased college fees are focused toward what aim? Like the studies done on the for-profit institutions, the traditional universities must answer: From how many students are these continually-burgeoning fees taken that never receive a college degree? More importantly, the for-profit colleges engage students with the idea of having specific career training for which they can obtain a position upon graduation. One of the knocks against for-profits is the lack of post-graduation placement. The post-graduation placement of students from the traditional universities needs serious analysis as those figures will be dismal in many cases. Few would care if you could say to the students “that is the risk you take.” But when the American taxpayers may have the tab put on their shoulders, the Administrators of these programs should be called to account for the promises they make. Often times the only placement that can be done within certain majors is within the department at the attended school or another like department at a similar school. The remaining graduates go either jobless or start their career in hotel or restaurant management.

Recently, James Delisle, director of the Federal Education Budget Project at the New America Foundation, wrote in the Wall Street Journal of how the graduates are using different methods of delaying their loan payments. It is called forbearance. These delayed payments have ballooned to $125 billion of the estimated $778 billion scheduled for current repayment (total debt being $1.13 billion as of September 2014). The Obama Administration is encouraging this forbearance program, tying it to income-based repayment. This income based repayment program will result in an average forgiveness of $41,000 per loan.

That is money that has been paid to universities that will never be repaid and then added to our national debt. If this is what will happen then it is not the obligation of the Congress to demand a decreased cost of graduate and post-graduate education to lessen the potential burden for their constituents.

Senator Lamar Alexander (R-TN) who took over for Senator Harkin, and Congressman John Kline (R-MN) who heads the Education committee in the House, need to hold extensive hearings about the soaring costs of college education and the related loans that are becoming an American disaster. Congress needs to step in and end this uncontrolled hand out to a select class of people – university employees.