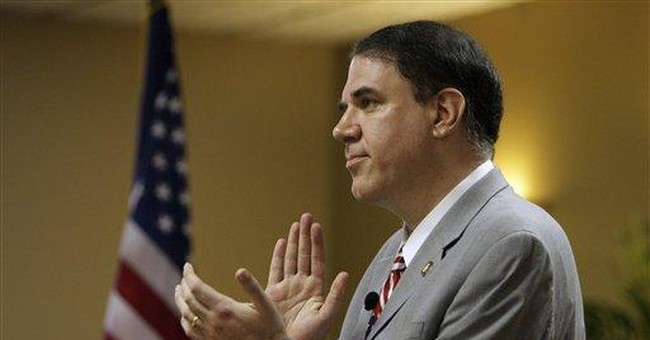 Over the past month, the battle for Florida’s Eight Congressional District has really heated up.  This is due not only to the strong campaign being waged by Republican Dan Webster, but also the apparent “scorched earth” policy that Alan Grayson is following as he desperately tries to win re-election.

As new polling shows Webster leading an incumbent who lacks any sense of shame and civility, Grayson has begun to lash out and take a path lower than any imagined.  Aside from allegations that Grayson has been laundering money to a third party candidate in an attempt siphon conservative votes, he has also been airing blatantly false ads against his opponent.  His now infamous “Taliban Dan” ad has been roundly denounced – which includes a strong rebuttal from the non-partisan FactCheck.org – and unfortunately shows how low Grayson will go now that he’s in danger of losing his seat in Congress.

One thing is clear – Alan Grayson is a national embarrassment, and voters have the chance to show Democrats that they deserve more on Election Day.

I would like to make a special request of our readers in discussing the current race in Florida’s 8th Congressional District.  Please forward this article to any of your friends and family because Alan Grayson must lose this November for the good of our nation.

For the past year-and-a-half, the good folks of Florida’s 8th Congressional District have been politically terrorized by Democrat Alan Grayson. Despite representing a swing district, Grayson has garnered a reputation as one of the most radically left-wing and behaviorally insane members of Congress. In late August, Republicans nominated top-tier GOP candidate Dan Webster, a solid conservative, true gentleman and committed public servant in an effort to send Grayson back to the planet from which he came.

Located in central Florida, the 8th District takes in parts of Orange, Lake, Marion and Osceola counties. A large part of Orlando is in this district, which includes Walt Disney World. Known as a moderately conservative region, Republicans represented Florida’s 8th from 1983 until Grayson took advantage of the money he made as a trial lawyer and a Democrat wave year in 2008. George W. Bush won this district in 2000 with 53% of the vote, and carried the 8th again with 55% in 2004. Rated by Cook PVI as R+2, Alan Grayson’s ultra-liberal agenda simply doesn’t represent the voters. In a year where Republicans have a decent chance to take back the House, Dan Webster is perfectly poised to take back this Florida district.

Unlike most of his fellow freshman Democrats, Alan Grayson has certainly not shied away from calling attention to himself. Infamous for his outrageous rhetoric and attention-grabbing antics, during his reign in Congress Alan Grayson has called one of Federal Reserve Chairman Ben Bernanke’s advisers a “K Street whore,” accused Republicans of wanting people to “die quickly,” and proudly called himself “the congressman from ACORN.” Perhaps even more troubling is his out-of-touch voting record. Voting with his party’s liberal leadership over 98% of the time, Grayson voted against his constituents’ wishes and interests when he voted ‘YES’ to massive Medicare cuts, job-killing tax hikes and higher healthcare premiums. Vice President of the Congressional Progressive Caucus, Grayson was also one of the 23 ultra-liberal Democrats who voted against a bill including a pay raise for members of the armed forces and $29 billion in vital medical care for soldiers and military families. One of the most hyper-partisan members of Congress, Alan Grayson has alienated his moderate and conservative constituents and become one of the most vulnerable Democrats in this year’s election.

On the contrary, the Republican nominee Dan Webster exemplifies principled leadership and a solid record. Former Florida Speaker of the House and Senate Majority Leader, Dan Webster was first elected to the Florida House of Representatives in 1980, where he served for 18 years. Since his first day as a public servant, Webster has worked to reform the way government does business, with sweeping conservative reforms that effectively advanced Republican principles. Webster has taken on corruption and knows how to restore forgotten values and fix broken government. Dedicated to putting Florida and its people first, Webster is ready to fight for limited government, lower taxes, fiscal responsibility and individual freedom in Washington. Dan lives with his wife, Sandy, and their six children in Florida.

This November, Florida voters can make a change by electing Dan Webster to Congress and taking back a Republican seat. I hope you will check out Dan’s website, become a fan on Facebook and follow him on Twitter to stay updated with the latest news and information from his campaign.