Brian Darling
|
Posted: Mar 27, 2017 12:30 PM
Share   Tweet
The opinions expressed by columnists are their own and do not necessarily represent the views of Townhall.com. 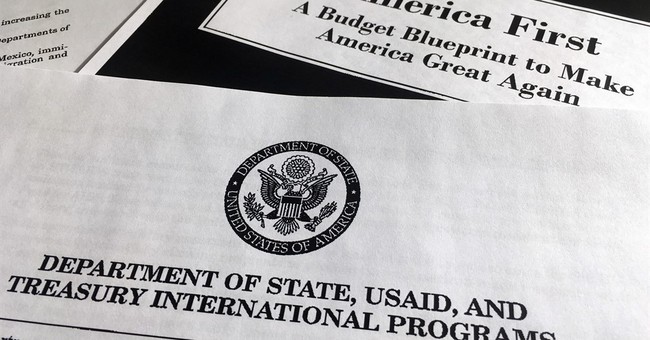 There was a media frenzy over the now-dead American Health Care Act and the supposed Russian ties of certain top Trump advisors, but the biggest news to come out of the White House since the inauguration was drowned out: the outline of Donald Trump’s first budget. Conservatives have been divided in the battle over how to repeal Obamacare, yet they can be unified on supporting a budget that slashes funding of over a dozen different departments. President Trump’s first budget is a major step toward reducing federal overreach, but the fact that the budget proposal does not take on entitlements is a shortcoming that Congress can address.

When Trump chose Freedom Caucus member Rep. Mick Mulvaney (R-SC) to head the Office of Management and Budget (OMB) he showed a commitment to cutting down the size and scope of government. Conservatives have been pushing to hike some military spending in the face of new threats. The administration wants to boost military spending by $54 billion, or about 10%, and pay for it by cutting discretionary programs. Homeland Security is also set to receive a $2.8 billion uptick in funding. Meanwhile, agencies slated for reductions include the EPA, State, Health and Human Services, the Labor Department, and the Department of Transportation.

The EPA has gotten the most headlines and angst from the left, because of the $2.6 billion (or 31%) cut in funding proposed in the Trump budget. But for all the hysterical outrage coming from liberal groups, Trump simply intends to put the house back in order to a time when the agency was not behaving like the Obama administration’s main vehicle for wheeling out burdensome regulations. Businesses and the wider economy have been hurt by the EPA’s sluggish and erratic decision-making at the behest of radical environmentalists.

That same desire to reverse some of the policies of the Obama administration can be seen in the proposed cuts delivered to the National Institutes of Health (NIH), which is set to lose nearly $6 billion of its $32 billion annual budget. One small example is an obscure agency that promotes junk science with U.S. tax dollars. International Agency for Research on Cancer (IARC), a group of scientists in France that gets nearly a million dollars from the U.S. government every year to tell the global public whether substances could possibly cause cancer—without ever actually making clear whether they are at risk or not. This is not much money, but if Congress can’t zero out this waste, then we are in big trouble with the big ticket items like entitlement reform.

The IARC isn’t merely waste, it is harmful. The organization is a never-ending stream of misleading headlines claiming everything from mobile phones to Oscar Mayer bologna are actually dangerous carcinogens. The most recent dust-up involves the agency’s assessment of glyphosate, a popular weed killer, which has been judged safe by every regulatory agency on earth (including those run by progressives in Europe and Canada)– with the exception of IARC. This is merely one example of many wasteful programs that need to be defunded by Congress.

Between these and other cuts, the proposed budget shows a willingness to go after discretionary government spending that has been missing since the Reagan years. There is, however, an elephant in the room that the proposal doesn’t touch: entitlement spending.

Social Security, Medicare, and Medicaid need reform and they account for more than 60% of the federal government’s spending. With control of the White House and both houses firmly in hand, this should be the best chance conservatives have had to take the problem head-on for a generation. Congress should address entitlement spending that is on track to bankrupt the nation.

Since the Tea Party came on the scene in 2010 and the Freedom Caucus formed in the House in 2015, conservatives have been warning that the entitlement-driven debt balloon needs to be stopped. Notwithstanding what happens in the next midterms, there is a window of 21 months to take serious action on this cornerstone national issue. This is the Freedom Caucus’s time to shine and to push for entitlement reform to be included in consideration of Trump’s budget that tackles discretionary spending reform.

If Speaker of the House Paul Ryan (R-WI) wants to unify the party in the House and get the House Freedom Caucus (HFC) working in unison with leadership, Ryan should work with Rep. Mark Meadows (R-NC), Chairman of the HFC, to reform spending on unsustainable social welfare programs. The GOP leadership should know the stakes as well as anyone: it might not make for sexy campaign politics, but conservatives have a moral and patriotic duty to get public spending back under control and put the country back on sound financial footing.

Hopefully Congress can put the meltdown over the attempted reform of Obamacare in the rearview mirror and forge ahead on implementing the Trump skinny budget with some enhanced entitlement reform added by Congress. Also, they should make sure that they don’t miss defunding the smaller programs like IARC when saving money for the taxpayer.